In DC on Sunday, Obama eligibility attorney Larry Klayman spoke to the crowd of veterans and protesters gathered as the Barrycades were removed from the war memorials and laid at the White House gates. While other prominent voices appeared alongside the protesters (Ted Cruz, Mike Lee, Louie Gohmert and Sarah Palin), Klayman took to the microphone and called Barack Obama a Muslim and encouraged the crowd to begin a peaceful second American Revolution through civil disobedience.

“I call upon all of you to wage a second American nonviolent revolution, to use civil disobedience, and to demand that this president leave town, to get up, to put the Quran down, to get up off his knees, and to figuratively come out with his hands up,” said Larry Klayman of Freedom Watch, a conservative political advocacy group. 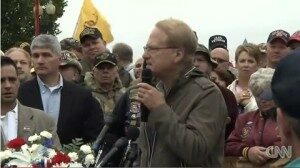 Klayman said that Obama “bows down to Allah” and does not represent “we the people.”

“I call upon all of you to wage a second American nonviolent revolution, to use civil disobedience, and to demand that this president leave town, to get up, to put the Quran down, to get up off his knees, and to figuratively come up with his hands out,” he said.

The issue of the spending bill is mostly about the unconstitutional law that is Obamacare, something that will consume 1/6 of the US economy. Does Mr. Carter point that out? No. Nor do either of these people point out that Republicans have yet to actually bring a challenge to Obama’s eligibility. Their budget does not reflect the enumerated power of the Constitution either. Did Carter or Minkovski point this out? No they didn’t, but yours truly here, a very happy Tea Partier, did.

Further, reports are that many Republicans believe Obama is a Christian simply because he says so. Well I have a question, if you take his words at face value, then please go through this interview in which he is specifically asked about Christian doctrine by clicking here. You will see that he is spewing anti-christian doctrine, not Christian doctrine.

In the name of God, Amen. We, whose names are underwritten, the loyal subjects of our dread Sovereign Lord King James, by the Grace of God, of Great Britain, France, and Ireland, King, defender of the Faith, etc.

Having undertaken, for the Glory of God, and advancements of the Christian faith and honor of our King and Country, a voyage to plant the first colony in the Northern parts of Virginia, do by these presents, solemnly and mutually, in the presence of God, and one another, covenant and combine ourselves together into a civil body politic; for our better ordering, and preservation and furtherance of the ends aforesaid; and by virtue hereof to enact, constitute, and frame, such just and equal laws, ordinances, acts, constitutions, and offices, from time to time, as shall be thought most meet and convenient for the general good of the colony; unto which we promise all due submission and obedience.

In witness whereof we have hereunto subscribed our names at Cape Cod the 11th of November, in the year of the reign of our Sovereign Lord King James, of England, France, and Ireland, the eighteenth, and of Scotland the fifty-fourth, 1620.

As evidence of that, listen to Barack Obama claim that we are not a Christian nation, as he promotes the myth of neutrality and no tensions between cultures:

If memory serves me right didn’t our pres say we’re not? RT @BUCKS4REAL: @MohamedElibiary christian country founded on those principles

Several of our writers have pointed out the tools of Islam, such as Taqiyya, in order to advance their caliphate (Islamic State). This is what Barack Obama desires. Just yesterday, I even pointed out Barack Obama’s treason by supporting foreign Islamists ,who are our enemies, and installing members of the Muslim Brotherhood, an organization that even our Army designated as a terrorist group alongside evangelical Christians, in very high position in our government. His federal attorney Bill Killian threatened those of us who point out the truth about Islam on social media and the blog world with federal prosecution and imprisonment. Has he done that with those who are anti-christian? I haven’t seen it. If you believe Barack Obama to be a Christian, then I say you are deceived.

What good is it, my brothers, if someone says he has faith but does not have works? Can that faith save him? If a brother or sister is poorly clothed and lacking in daily food, and one of you says to them, “Go in peace, be warmed and filled,” without giving them the things needed for the body, what good is that? So also faith by itself, if it does not have works, is dead.

But someone will say, “You have faith and I have works.” Show me your faith apart from your works, and I will show you my faith by my works. You believe that God is one; you do well. Even the demons believe—and shudder!

Barack Obama has empty words. Judge him more by what he does, not what he says. This is what Klayman has done.

Report: Fracking Can Cause Earthquakes on Faults Tens of Miles from Fracking Boreholes