All law and lawmaking is “religious” in the sense that it derives its authority to act from something outside of — above — itself. In this country, that “something” that our law is based on is the Bible. This is clearly apparent not only in the text of the Declaration of Independence, but it is also demonstrated in the texts of our earliest covenants, constitutions, law-codes, compacts and charters.

And this fact is known and recognized by Christians and non-Christians alike. For example, a 1982 “Newsweek Magazine” cover story headlined “How the Bible made America,” said that historians were discovering that the Bible is our founding document. 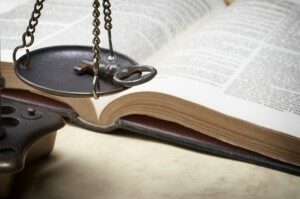 Indeed, it is this founding on Scripture that made America an exceptional country — a people called by God to establish a model society — a beacon to the world.

In our country, until relatively recently, God’s Word, His Law, was the standard by which to judge whether made-man statutes were just or unjust. This view is taught in Scripture itself.

It is also taught in the Writings of St. Augustine, Thomas Aquinas, the great British jurist Sir William Blackstone and by the Rev. Martin Luther King, Jr.

In his famous “Letter From A Birmingham Jail,” Dr. King wrote,

Dr. King went on to remind us that we should never forget that everything that Adolf Hitler did in Germany was “legal.” The word “legal” he placed in quote marks because, of course, what Hitler did was not legal since it violated God’s law.

Learn more about your Constitution with Michael Peroutka and his “Institute on the Constitution” and receive your free gift.