Is it just me, or does anyone else take issue with Eric Holder arranging what is essentially a private fund raiser for Hillary Clinton called, ‘Lawyers for Hillary?’ Incidentally, is it for her criminal defense fund or her campaign fund, and has that been “officially” designated as such? I’m not referring to the ‘legality’ of it, but rather the ‘morality’ of it.

Do you know why it doesn’t matter if Trump became the nominee or not? It doesn’t matter because America can’t be made great again, not by any one man (or woman) anyway. No matter how much moral depravity may exist within the beltway of Washington D.C. that people blame America not being great on, there are only 534 people in Washington (100 Senators, 425 in the House, 9 Supreme Court Justices normally, but only 8 right now, and 1 President), and there 320 MILLION people everywhere else. SOMEONE keeps sending these people there…

It’s not just that Hillary Clinton hasn’t been disqualified from running for President already, it’s that people are still voting for her in droves. If the Department of Injustice won’t knock her out of the race, I’d like to think that we the people would do so by not casting a single vote for a criminal. No such luck though. The DOJ didn’t have to disqualify George Pataki from the race did they? No! Voters had enough sense not to vote for him, and he isn’t even a criminal.

The average of all the polls listed at Real Clear Politics for the General Election: Trump vs. Clinton are about 45% to 45%. How can ANY country be great when half of the people in the country are willing to vote for a murdering (ok, a bit of conjecture on that), sociopathic, criminal? For the love of Pete, our sworn enemy Russia, has 20,000 of Hillary’s emails they got off Hillary’s server that allegedly had nothing important on it.

Never mind all that though, Hillary promises free stuff with no work, so almost half the nation is willing to overlook her “shortcomings,” and give her their vote. So long as the moral compass of the people is THAT skewed, America will never come close to being great again. It will barely be able to work its way up to being marginal, much less great. Who are people trying to fool here?

AND NOW ANOTHER FUTURE CONVICT, ERIC HOLDER, IS RAISING MONEY FOR HER?

HAVE YOU SEEN HIS HIGHLIGHT REEL?

You have GOT to be kidding me! After THREE YEARS of litigation by the House Government Oversight Committee, the official documents were released by DOJ show that Eric Holder was responsible for the cover-up of the Fast & Furious “gun-walking” operation, and the obstruction of the congressional investigation of an anti-2nd Amendment conspiracy that led to at least one American Border Patrol officer being murdered and the murder of numerous civilians in Mexico with guns smuggled to drug lords that were sold to the smugglers by gun shop owners under orders from government agents. People don’t have a problem with THAT guy raising money for another criminal at a fancy high priced party?

KNOWING ALL OF THAT… PEOPLE ARE STILL BEHIND THIS WOMAN?
HOW MANY STORY CHANGES SINCE THE PRESS CONFERENCE BELOW?​

The FBI investigation of Hillary Clinton continues, but that isn’t stopping the former head of the Department of Justice from holding a fundraiser for the Democratic presidential candidate.

Julianna Margulies, who played a political spouse betrayed by her husband, will also be at the event.

An invitation for the event posted on Hillaryclinton.com reads, “Please join Lawyers for Hillary and Eric H. Holder, Jr., 82nd Attorney General of the United States and Julianna Margulies for an evening with Hillary.” 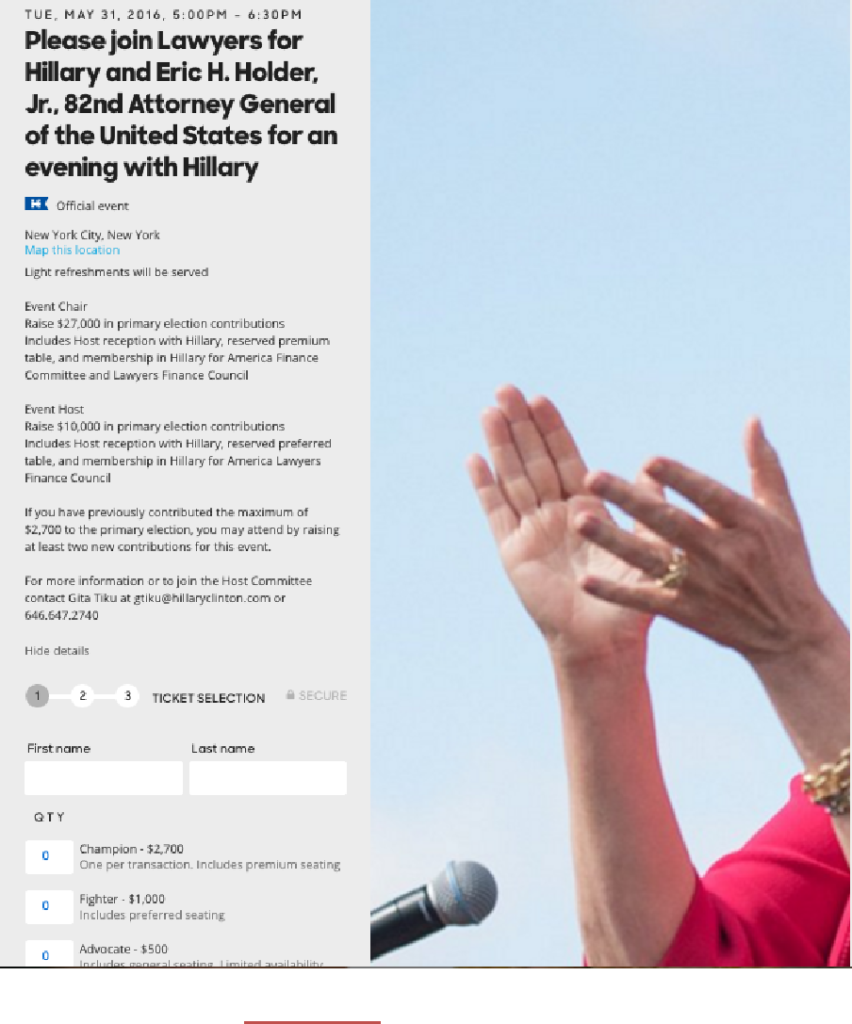 The FBI is part of the Department of Justice, which is now headed by Loretta Lynch.

Article posted with permission by The Last Great Stand.