Murdered DNC staffer Seth Rich has long been suspected of being the source who leaked thousands of Democratic National Committee emails to online whistleblower organization Wikileaks. Even Wikileaks founder Julian Assange alluded to the possibility that Rich was killed for what he knew.

And while the Democratic Party has made every effort to discredit any connection between Rich’s murder and Wikileaks, going so far as to target anyone who makes mention of it with character assassination or censorship, the following document from the Federal Bureau of Investigation confirms at least part of the story.

According to Borderland Alternative Media, who obtained a heavily redacted memo from an anonymous FBI source, the document sheds more light into the Seth Rich murder investigation, noting that he did, in fact, have DNC emails on his computer. And though it is unclear what connection the FBI made with the DNC or Wikileaks, both are mentioned in the memo.

In a heavily redacted memo, released to me by a source within the FBI, we see Seth Rich’s name. The Email states that the laptop contained DNC and Wikileaks information.

What that code means is name of person being looked into. “SCR” Seth Conrad Rich. Location “DC” with “408” documents. Any FBI Memo, if it’s a target of an investigation will show a code that can be used by journalists to request a FOIA. So FOIA experts can use that code and obtain a less redacted version.

Because of the heavy redaction, it is unclear what connection, if any, has been established by the FBI between Rich, the DNC and Wikileaks, because it only contains partial information.:

Custody of Laptop was… [REDACTED]

Here is the full redacted memo: 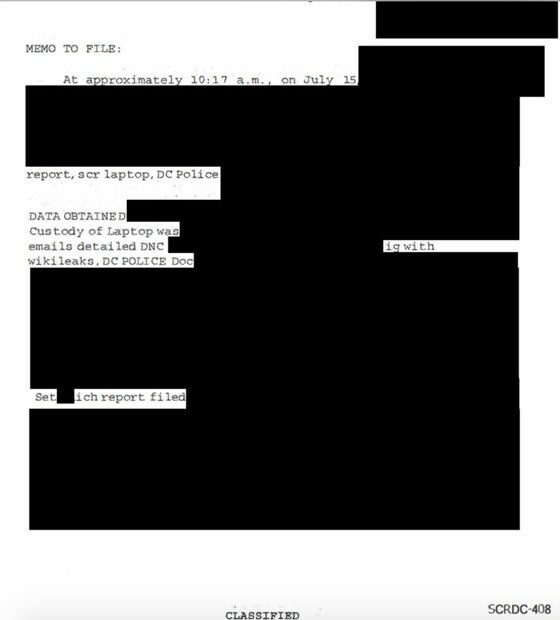 States That Opposed Obamacare Spent The Least Per Person On Enrollment

Is Trump Rethinking His Promise to Prosecute Hillary? "They're Good People. I Don't Want to Hurt Them"

Is Trump Rethinking His Promise to Prosecute Hillary? "They're Good People. I Don't Want to Hurt Them"