Libya and Syria: The Government's (Indirect) Case for an Armed Population

As anyone with a rudimentary education regarding American Constitutional politics can properly explain, the Second Amendment to the Constitution of the United States, the “Right to Bear Arms”, has far less to do with “hunting and sport shooting”, but far more to do with the business of guarding the liberty of the citizens of the State from the encroachments of tyrannical government. 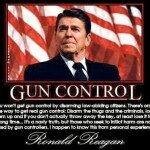 “There are those in America today who have come to depend absolutely on government for their security. And when government fails they seek to rectify that failure in the form of granting government more power. So, as government has failed to control crime and violence with the means given it by the Constitution, they seek to give it more power at the expense of the Constitution. But in doing so, in their willingness to give up their arms in the name of safety, they are really giving up their protection from what has always been the chief source of despotism — government.”

As we explore the “gun debate” more thoroughly, the Government of the United States has made what is perhaps the greatest case for an armed population: Libya and Syria. 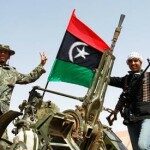 If we are to believe the mainstream narratives on Libya and Syria, the indigenous populations of these two nations were so disgusted with the state of their existence in their respective countries that they rose up en mass in an effort to overthrow their respective governments.

The truth of the matter is: the overthrow of Libya and the attempted overthrow of Syria is far more rooted in Paul Wolfowitz’s pro-Israel plan of creating a unipolar Middle East where U.S. hegemony cannot be contested and the ensuing morass enables Israel to expand on its Greater Israel project.

However: lets humor the narrative.

According to a report by issued by the United Nations’ Human Rights Council, submitted to the U.N. General Assembly entitled the “Report of the Working Group on the Universal, Periodic Review* Libyan Arab Jamahiriya”, it was noted that,

“Several delegations also noted with appreciation the country’s commitment to upholding human rights on the ground. Additional statements, which could not be delivered during the interactive dialogue, owing to time constraints, will be posted on the extranet of the universal periodic review when available.”

One month later, the press in the United States, began changing the narrative to a country that was leading Africa in social and economic development to that of a country “led by a brutal dictator”.

As the narrative was spun, it became necessary for the United States to arm the Libyan opposition, a project apparently headed or coordinated through the efforts of the late (assassinated) Ambassador Stevens, as well as provide offensive air power in support of the opposition elements.

It all ended with the rather ghoulish giggle from Secretary of State Hillary Clinton, “We came, we saw, he died!”

In the case of Libya, a well armed militia was something that the United States government, operating through the Departments of State and CIA, clearly found to be a necessary and beneficial reality for the people of Libya “to defend” themselves.

The implication is that the United States Government believes that for foreign citizens, these citizens not only have a right to “bear arms”, but these arms should be sufficient enough to defend against the weaponry that may be brought to bear by the “tyranny of the State”. 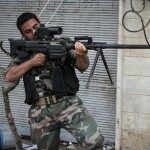 With Libya “down”, one of the remaining wish lists in the Jewish centered Neo-Con movement was the destruction and take-down of Syria. Indeed, as early as 1996, President Bashar al-Assad, and little time was wasted.

In April, 2011, a rally was held in the city of Homs. Snipers opened fire, leaving 50 dead. According to some activists videos, the snipers were foreign elements. However, Western media portrayed the shootings as being the handiwork of the Syrian government.

A media war started. The Syrian press, less respected than the Western press, was believed over the Syrian press. People bought the tactical lie, and the rest is history.

Foreign fighters (Sunni extremists), backed by weaponry from the newly decapitated Libya and financed by the same Qatar and Saudi elements that were instrumental in the fall of Libya, flooded Syria, unleashing a wave of chaos and terror.

Syria has since slid into a deepening chaotic violence.

If Western media is to be believed, the Syrian “opposition” is but (originally) a home grown uprising against a “tyrranical” government. Reporting in the BBC on March 12, 2012, Peter Harling of the International Crisis Group is quoted as saying,

“Many Syrians have been shocked by what they describe as the savagery of the regime and protesters in Homs have been successful at displaying a sense of civilisation which belies the regime’s narrative of a thuggish underclass.

This statement is typical of the willful and childish polemic presented by “Western press” sources.

Additional reporting sought to lay the framework for the need for “Syrians” to be better armed,

But correspondents in the city said the rebel soldiers of the Free Syria Army (FSA) were armed only with guns, no match for the artillery they faced.

““We are increasing our nonlethal assistance to the Syrian opposition, and we continue to coordinate our efforts with friends and allies in the region and beyond in order to have the biggest impact on what we are collectively doing,” a State Department official told the newspaper.

The Gulf States have shipped weapons, including anti-tank weaponry, to help the rebels fight back against Syrian President Bashar Assad,

As in the case of Libya, it is clear that the United States Government believes that a people have a right to bear arms and to be sufficiently armed to ward of the tyranny within which the people find themselves.

Libya and Syria: The Case for an Armed America? 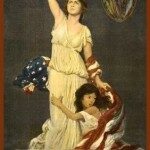 The United States Government, through its words and actions regarding Libya and Syria, has clearly come down on the side of a people armed to the necessary levels required in order to create the conditions for “democracy” to be able to be implemented.

Is it the intent of the Federal Government to implement tyranny and hence, desire to see the population disarmed to the point of being defenseless?

In the case of Libya and Syria, the message from the United States government is that an oppressed people have not only the right to bear arms, but to bear arms in the sufficient caliber and quantity in order to defeat the inherent power of the State.

With a failed 9-11 narrative, a failed Sandy Hook narrative, among many others narratives, combined with unlimited and warrantless violations of privacy, of a clear intent to suspend Habeus Corpus, arguments by the Executive Branch to unilaterally assassinate American citizens and/or detain them secretly and indefinitely, how far removed are the machinations to enable rogue elements within the United States Government from being the very tyrannical element for which the United States government so willingly armed Libyan and Syrian opposition groups?

David Gregory Walks: Will Not Be Arrested Or Prosecuted For Illegal Magazine Possession

David Gregory Walks: Will Not Be Arrested Or Prosecuted For Illegal Magazine Possession