Is a mini Mecca being built in Dallas, Texas? Of all the frightening propositions, this is happening right now. The Lone Star State is morphing into an Islamic hotspot. How could this happen in a state that revels in its guns and Bibles? By slow, deliberate integration and patience. The Islamic Association of North Texas (IANT) did not come to prominence overnight, but flew under the radar. Thus, the Islamic community has expanded and prospered. With the Assembly of Muslim Jurists of America (AMJA) set to train 200 Imans in February of this year in Dallas, Sharia is coming to Texas. The subject of this conference will be “Islamic Home Finance in the West.” This is instructing Imans on Sharia Finance and implementing sharia by force. At this point, there couldn’t be a better place to set up a vast Islamic community than Sharia compliant north Dallas. It is not a matter of if, but when.

Dallas, Texas is one of the last places one would expect to encounter Sharia law, much less a thriving Islamic community. However, the Devil works while people aren’t paying attention, and when political correctness overrides ationale. The Islamic Association of North Texas has been active for thirty years in the Dallas area, making inroads and growing. With this, the IANT has come and conquered. The IANT’s website is eye opening and something every American should look at to get a feel for what an Islamic invasion looks like. This is happening in our own backyards.

More than thirty years ago, the Islamic Association of North Texas (IANT) was established to serve the local Muslim community. Since then, our community has grown considerably, and so have our needs. As we inaugurate our next quarter-century in North Texas, we introduce a novel community idea: the Islamic Village Project, a Muslim neighborhood.”

The Islamic Village Project is a multi-million dollar project that will foster great change in the Muslim community of Dallas. It will house a senior center, Youth center, Social Services department, residential quarters, play area for the children, retail center, clinic, and a separate building for IQA and Suffa Islamic Seminary classes. The project will extend from the current Masjid facility at Abrams, on the North and South side of Spring Valley across from the masjid, and West towards Greenville.

This sounds like an ambush, but in actuality it required careful planning. An Islamic village in North Texas seems like something out of the Twilight Zone. But if Sharia can come and conquer other American locales, Texas is not exempt. There is no area in the United States that is immune to an Islamic invasion. To unobservant eyes, this will look like a well formed, integrated community. For all practical purposes, this works in a secular American society that has lost its vigilance when it comes to true Islam, and never truly understood it to begin with. Islam invaded America and has thrived because of the ignorance of the American people.

One of the cornerstones of the Islamic Village will be it Educational Complex housing our IANT Quranic Academy and Suffa Islamic Seminary under the leadership of Imam Yusuf Ziya Kavakci. In addition, the Educational Complex is expected to have a Youth Center, Day Care Facilities, and playground areas for children of all ages.

“When you memorize the Quran you’ve planted the seed. The seed needs to be watered and taken care of, so make the Quran part of your life.” This is on the IQA-IANT Quranic Academy’s Facebook page. 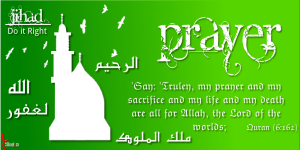 What a perfect breeding ground for eager young jihadist minds. This Islamic Association of North Texas has direct ties to Hamas. This is not community integration, but terrorist training and preparation. To be an ardent Islamist is to wage jihad. Their official mission reads like a Interfaith conference bulletin.

To educate on the virtues of Islam and practice it. To build bridges of cooperation, mutual respect, and understanding among faiths.

What lies and deception! No one will be the wiser! To be in opposition is to be an “Islamophobe.” In the name of progressive idiocy, Islam is peace, in spite of the obvious truth. In 2008, five Muslim leaders, working under the guise of a charity known as the Holy Land Foundation for Relief and Development in Dallas, were arrested for funneling millions of dollars to Hamas. No doubt many of the same people involved in this terror operation are working for the IANT to build Dallas’s version of Mecca.

With the coming AMJA conference in Dallas in February, a disturbing picture emerges. This is sharia coming to Texas, to instruct and send Imans out to other parts of the country to engage in jihad. The California-based Salafist group is training Muslims from across the country to teach and educate them, and then for them to propagate these sadistic teachings in mosques everywhere.

Several of AMJA’s fatwas are harmful to women, justifying marital rape and “female circumcision” or, as it the practice is more accurately called, female genital mutilation. AMJA advises Muslims against joining law enforcement in case they are ordered to arrest a Muslim for raping his wife.

These are not messages that should be welcomed anywhere and especially not in the U.S., but about 200 imams in this country respect AMJA enough to go to its Texas conference for instruction. That is shocking enough by itself, but we must also consider all of AMJA’s allies that won’t be attending the event.

The state of Texas spawned Mohamed Elibiary, who grew up in the North Dallas area, and has direct ties to the Islamic Association of North Texas. In 2008, Elibiary strongly criticized the Holy Land Foundation (HLF) convictions. Both the IANT and HLF have ties to Hamas and the Muslim Brotherhood. Instead of Elibiary being convicted of terrorist activities, he has risen to a position of prominence within the Department of Homeland Security. Islamists do not get demoted in Obama’s Muslim Brotherhood White House, of which Elibiary is its most vocal member.

Everything is bigger and better in Texas, or so they say. Evidently, this same standard applies to a complete Islamic community, where present-day and future jihadists will learn and train to kill in the name of Allah.