The city of Tampa has been preparing for weeks for protests and threats of violence at the Republican National Convention. One thing that was probably not thought of was machetes. However, police arrested a Tallahassee man protesting at the RNC for carrying a machete into the Event Zone.

According to Hillsborough County Sheriff’s officials, Jason T. Wilson, of Tallahassee, was arrested as he walked in the RNC Event Zone carrying a “full size” machete.

When deputies approached Wilson, they said he continued to walk away despite orders to stop.

“When deputies caught up to Wilson, he advised he did not have to stop and that he was allowed to carry whatever he wanted,” HCSO spokesperson Larry McKinnon said.

When deputies attempted to physically stop him, Wilson allegedly began resisting arrest and was physically restrained.

Wilson was arrested and taken to the Hillsborough County Sheriff’s Office on charges of prohibited items in event zone and resisting arrest with violence.

While Wilson remains unconnected to a particular oganization or entity that is protesting the RNC, it was, in fact, against the law for him to be carrying the machete to the event. There have been numerous threats of violence from the New Black Panthers, anarchists and even those who have said they would be committing “legitimate rape” against conservative activists Brandon Darby and Lee Stranahan who worked on the film “Occupy Unmasked.” Some have even promised “non-violent protests.” 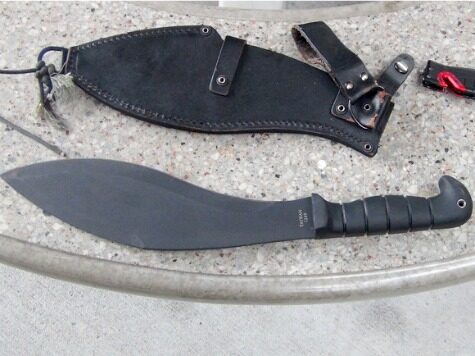 Congressmen To Obama: We'll See You In Court

Congressmen To Obama: We'll See You In Court