An article that was formerly on The Washington Post’s website has been removed and archived that took a look at Hillary Clinton campaign chairman John Podesta‘s brother’s art collection. The collection was said to have contained “documentary-style pictures of naked teenagers in their parents’ suburban homes.”

The 2004 article is about Tony and Heather Podesta titled “Married, with Art” and claims the couple is a “study in power collecting.”

Among some of the pieces in the Podesta’s Falls Church Home is a sculpture of a naked man bent backwards by Louise Bourgeois called “The Arch of Hysteria.”

“You’ve got to be pretty secure to have an eight-foot-tall naked man in your living room in Washington, D.C.,” Heather says of her husband’s sculpture.

Among their 900 pieces, the article mentions that former Clinton administration official Sally Katzen said at a Women’s Campaign Fund dinner at the Podestas’ home, “At political events, there’s an inevitable awkwardness. The art is an ice-breaker. It puts people at ease.”

However, the article went on to say that is not always the case and dropped this bombshell:

Folks attending a house tour in the Lake Barcroft neighborhood in Falls Church earlier this year got an eyeful when they walked into a bedroom at the Podesta residence hung with multiple color pictures by Katy Grannan, a photographer known for documentary-style pictures of naked teenagers in their parents’ suburban homes.

“They were horrified,” Heather recalls, a grin spreading across her face.

Let that sink in. A grin spread across her face. That’s just devilish.

John Podesta commented on his brother, “Tony loves the artists themselves as much as the artworks.”

John has his own sick brand of art. Take a look at this piece from the Clinton campaign headquarters depicting cannibalism, which was later mentioned in TIME magazine. 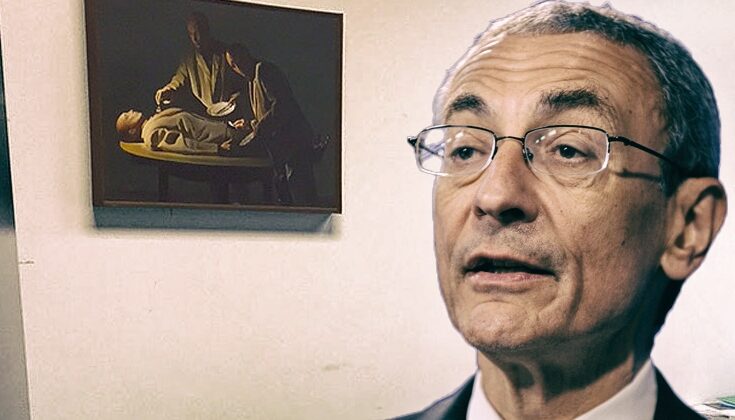 “On the wall in his office at Hillary Clinton’s Brooklyn headquarters, campaign chairman John Podesta has an oil painting on loan from his lobbyist brother, who is an avid art collector,” the article reads. “The image shows two men hunched over a dining room table, bearing knives and forks. On the table lays a man in a suit, who looks vaguely like Podesta.”

“It’s better to be the guy with the fork than the guy on the table,” Podesta would tell his colleagues.

None of this should be surprising, though it may shock many. On Saturday, we reported that emails from Podesta indicate that he would attended a “spirit cooking” with Marina Abramovic.

These people do not represent the founding of America. They do not represent our Christian heritage. They represent their father the devil, the one whose head has been crushed under the foot of the Lord Jesus Christ. Should we fear these people? Not if our hope and faith is in the God of the Bible! In fact, we should run towards them and demand justice be brought upon their heads in a similar manner to that of David when he set out to defeat the giant, Goliath.

The question now is, will America listen to the WWE tactics of the likes of FBI Director James Comey and be lulled into sleep once again, or will they do more than merely send out tweets on Twitter in a bitter rage? My hope is that they will repent first and then seek justice against the criminals.