Finally, an official states the obvious. The person or persons who took the controls whether one of the pilots suddenly got religion or someone on the passenger list took over — in any event whoever it was had very sophisticated knowledge of this aircraft.

The deliberate actions taken after the manuals were disabled, someone put in manual commands for a sharp left turn, five hours after that occurred it appears someone left the cockpit, went below and disabled that last signaling system purposely and continue to fly (without those now well understood “pings” back to Rolls Royce.” That is sophisticated knowledge. This was all to obfuscate and mask the flight’s path.

The Wall Street Journal reports, “A physical disconnection of the satellite communications system would require extremely detailed knowledge of the aircraft, its internal structure and its systems.” 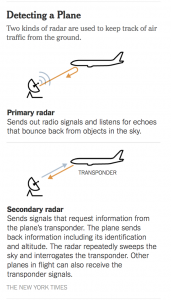 Malaysia Airlines Flight 370 experienced significant changes in altitude after it lost contact with ground control, and altered its course more than once as if still under the command of a pilot, American officials and others familiar with the investigation said Friday.

Radar signals recorded by the Malaysian military appeared to show that the missing airliner climbed to 45,000 feet, above the approved altitude limit for a Boeing 777-200, soon after it disappeared from civilian radar and turned sharply to the west, according to a preliminary assessment by a person familiar with the data.

The radar track, which the Malaysian government has not released but says it has provided to the United States and China, showed that the plane then descended unevenly to 23,000 feet, below normal cruising levels, as it approached the densely populated island of Penang.

There, officials believe, the plane turned from a southwest-bound course, climbed to a higher altitude and flew northwest over the Strait of Malacca toward the Indian Ocean.

WASHINGTON — The Associated Press is reporting that a Malaysian official has said investigators have concluded the missing jet was hijacked and steered off-course.

A U.S. official told The Associated Press that the Malaysia Airlines plane sent signals to a satellite for four hours after the aircraft went missing early last Saturday, raising the possibility the jet carrying 239 people could have flown far from the current search areas. It also increased speculation that whatever happened to the plane was a deliberate act.

Malaysia’s Transport Minister Hishammuddin Hussein said the search was expanding further afield, not because of any new information about the plane’s flight, but because the aircraft has not yet been found.

Malaysian officials declined to discuss when -or even whether – they had information about signals to satellites, and that they would release details only when verified. Hishammuddin said Malaysian investigators have worked with U.S. colleagues in Kuala Lumpur since Sunday.

“I hope within a couple of days to have something conclusive,” he told a press conference.

If the plane had disintegrated during flight or had suffered some other catastrophic failure, all signals – the pings to the satellite, the data messages and the transponder – would be expected to stop at the same time. Experts say a pilot or passengers with technical expertise may have switched off the transponder in the hope of flying undetected.

No theory, however, has been ruled out in one of aviation history’s most puzzling mysteries.

Mike Glynn, a committee member of the Australian and International Pilots Association, said he considers pilot suicide to be the most likely explanation for the disappearance, as was suspected in a SilkAir crash during a flight from Singapore to Jakarta in 1997 and an EgyptAir flight from Los Angeles to Cairo in 1999.

“A pilot rather than a hijacker is more likely to be able to switch off the communications equipment,” Glynn said. “The last thing that I, as a pilot, want is suspicion to fall on the crew, but it’s happened twice before.”

Glynn said a pilot may have sought to fly the plane into the Indian Ocean to reduce the chances of recovering data recorders, and to conceal the cause of the disaster.

Experts said that if the plane crashed into the ocean, some debris should be floating even if most of the jet is submerged. Past experience shows that finding the wreckage can take weeks or even longer, especially if the location of the plane is in doubt.

Is it Time to Stop the Murder of Babies & Implement Lawful Execution of Practicing Homosexuals?