Man Survived For Days In Arizona Desert On Beer And Crackers

When Mick Ohman found himself standing on a road made of boulders staring at a trail of transmission fluid strung out behind his broken down SUV, he had no idea that he’d be able to survive for days on just the beer and crackers he had in his car.  Ohman’s harrowing tale of survival can be a lesson to the rest of us too if we simply care to take heed and prepare.

Ohman was several miles southwest of Crown King and all alone in the sweltering Arizona desert. He picked up his phone and talked, recording a message in a quivering and emotional voice.  It was a message that he hoped nobody would ever hear, “If you find this phone and I didn’t do so well, please tell my sisters how much I love them.”  As sad as that message is, it’s speaker did come out and fight for his life.

Mick realizes now there were several little mistakes that led to the life threatening survival situation in the desert. “I didn’t tell anybody where I was going. “I thought I was just going to Crown King to have lunch,” said Mick. He also said trusting Google Maps was a bad idea. Google maps did show Mick that there was a road, but it did not detail the primitive conditions of the road.  That left the man driving alone on a road made of rocks with deep ruts.  After his lunch in Crown King, he tried to take his Honda CRV on the road picked up by Google Maps. 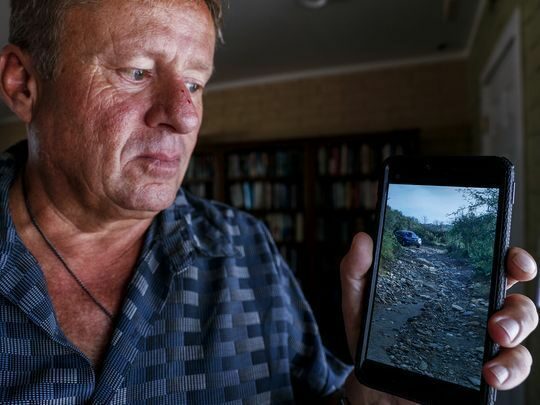 Mick Ohman shows a picture of his broken down car.

After the Honda broke down, Mick hiked for hours in hopes of finding a cell signal so he could call for help. But he had no luck. Back at his car, he had only a half-bottle of water, a couple beers, a spoiled sandwich, and some crackers. That’s when he realized that things had turned dire. The hike to look for cell phone service in staggering heat had taken its toll, making him thirsty. “I’ve really never felt that thirsty before. When I tried to swallow I couldn’t. My throat stuck together. I had to urinate and I did… and I was surprised it wasn’t as obnoxious as I thought it would be. The temperature was what got me, as warm as it was,” said Mick, with a laugh about drinking his own urine. He knows many people would find drinking urine unacceptable, but he believes it saved his life and got him through that first night.

Mick was awarded with another little ray of hope on day two.  He grabbed his beer and went out looking for help. He walked in the right direction and came across a spring of fresh water.  “I found this little stream; it couldn’t have been more than four inches,” said Mick, adding it was the sweetest water he’d ever tasted and he drank until he was nauseous. Then he dumped out the beer and filled the empty cans with water before returning to his car to attempt to signal rescue by starting a fire but he could not get it to light. Mick even tried to shot a gun in Morse code. He built an “H” out of small boulders to signify “help.”  That night, it rained, and Mick even recorded himself giddy that he experiencing the huge rain drops while stranded in the desert.  “It’s coming down pretty nice,” he said into his cell phone camera, soaked to the bone and happy.

On day three, Mick decided it was time to be rescued. He left a note on his car saying where he’d be walking, and took off on foot again. He began hiking at first light but soon found himself trudging in the mid-morning sun. “I’m running out of gas. I’ve got water, but I’m running out of steam. My legs are super heavy,” said Mick, recounting his journey. Ready to collapse, Mick encountered the man who saved his life; a dirt biker named Troy, who had seen Mick’s note on his broken down Honda, and went looking for him.

An hour long ride to Lake Pleasant and Mick was safe. “I’m screaming in his ear the whole way, ‘You know, today you can say you saved a life,’” Mick said. If we care to take anything from Mick’s story, it’s that those meant to survive can and will with nothing more than their wit.  But we can also see it as a lesson: have provisions in your car, just in case the undesirable happens.

Mick also hopes his story can help save a life by drawing attention to the need for preparedness.