Marine Vet Nick Powers to ISIS: “Attack Us and There will be No Mercy”

As we have covered before, true God-fearing American patriots are not fearful of Islamic devils who wish to do us harm. Following numerous threats from the Islamic State and alleged “message to America” beheading of journalist James Foley, it’s a breath of fresh air for one of America’s military men to speak candidly and present a message to the followers of the “non” prophet Mohamed. Marine Corps veteran Nick Powers, who served in Iraq in 2006, decided to deliver that message via his Facebook account, warning the Islamists that is they attack America, the Geneva Convention will not apply to them and there will be absolutely no mercy shown. 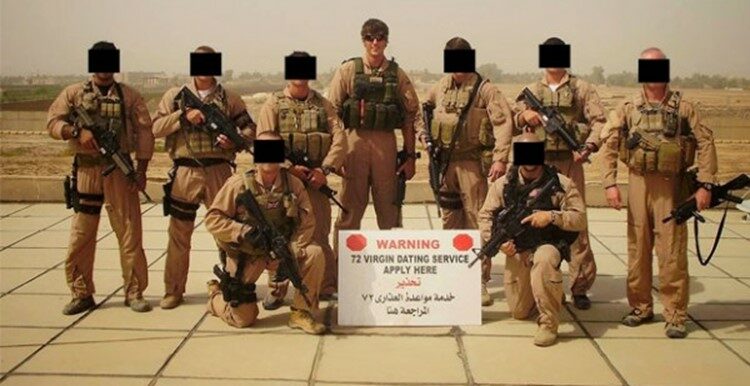 To all you ignorant Islamic extremist f***s. As I sit here watching you execute women, children and men in the Middle East I chuckle. Why do I chuckle you may ask? Well let me explain something to you idiots who think you are so tough. You are scaring a population that doesn’t know how to fight, you’re bullying the weak. What did Saddam’s troops do when we came to town? Surrendered, twice… All your threats of coming to America and raising your flag over the White House amuse me more than you could ever understand. In 2012 there were 21.2 million veterans in the United States. Do you understand what that means? That means there are millions of pissed off veterans who have been dealing with years of abuse from their government stabbing them in the backs and having to watch friends die because you Islamic idiots can’t seem to act like human beings and stop terrorism and violence. It’s one thing to take over an Islamic state, pretty sure we plowed through Fallujah in 4 days, do you really think you stand a chance on US soil? Do you really think it would be smart to poke that bear? Remember we are armed in the US and I can promise you that the Geneva Conventions will not apply to you. You attack us and there is no mercy. The ball is in your court Islam, we are more than ready to send you to your “prophet” Mohamed….

UPDATE: To all who read this and assume this is against all Muslims, I am sorry you are too blind to read, this isn’t against Muslims in general. If you feel otherwise I suggest you look at yourself in the mirror and ask yourself one question, am I an extremist? You say Islam is the religion of peace, since when does terrorizing the innocent (beheading women and children, wtf?) mean peace? This is directed at all extremist, if this offends/makes you angry or think I am racist you are probably an extremist…

Following his post, the Marine veteran appeared on Fox News to talk about his comments.

Watch the latest video at video.foxnews.com

Powers, in response to a question asking him where he thinks Barack Obama has gone wrong, said that he didn’t know, but was disgusted by the direction the federal government is going.

“It’s kind of disgusting to me to see where our entire government is going in a lot of aspects where there’s absolutely nothing being done in more than one area than just this ISIS problem,” he told Fox News.

He then said what drove him to speak out on the issue. “I followed it online, I watched the videos and saw the pictures that they’re (ISIS) posting and they’re absolutely disturbing, and I noticed that there was really no mainstream coverage. It really tore my heart to pieces.”

“These people being brutally slaughtered by the thousands and nothing is being done,” he said. “I was in an angry mood and I posted on Facebook and I noticed that the stuff….most of the stuff that ISIS is posting with the hashtag #AMessagefromISIStoUS, so I decided to put #AmessageFromtheUStoISIS. I had no idea that it would go anywhere. Most of my friends on Facebook are friends from the Marines or my contract time overseas and I figured I’d get a few shares from them and hopefully get the word out a little more, but I had no idea.”

Powers said that politics gets in the way of everything and admitted that the answers are not as easy as one would like them to be. However, he then said that there was no way to deal with the problem in Iraq “without boots on the ground.”

“You can fly drones, you can bomb whatever you want, but without boots on the ground, you’re never going to fully accomplish the mission militarily,” he concluded.

Some have questioned if this entire thing has not been a part of Obama’s Hegelian Dialectic. I admit, it does fall into that pattern.

However, the reality is that we have seen what ISIS has done throughout Iraq and we have covered what many of them did in Syria. We know they are only following in the footsteps of the founder of Islam. Mohamed was just as vile and evil a man as these devils.

However, I wonder if there may not be a solution to the matter without the US military engaging these people. The solution I look towards is one that Thomas Jefferson used against the Islamists of his day. We know that showdown as the Barbary Wars, in which Congress issued letters of marque and reprisal for private warships to be used to wage war on behalf of the United States. While we may not have a lot of private warships, we most definitely have a lot of veterans and plenty of men willing to be trained to go and rescue the weak in Iraq and Syria and bring justice to their oppressors. To that, I say a hearty “Amen!”

The question then becomes whether or not this administration or our current Congress would even consider such a thing, since they don’t seem to be considering the constitutional remedy for a lawless president. No matter what happens in the future, it’s good to know there are still Americans who won’t apologize for taking on those that threaten us out in the open. What are your thoughts?

Congress Prepared To Fight Obama On Military Base Closures

Congress Prepared To Fight Obama On Military Base Closures