I confess I’ve been called a bigot for lots of things simply because I have a Christian worldview. I’ve been called it by atheists, homosexuals and Islamists, but they always use that because they simply cannot defend their positions, and so, they resort to name calling. It shouldn’t surprise anyone then that socialist Representative Maxine Waters (D-CA) spoke at an Islamic Society of Orange County town hall meeting on the issue of the Constitution and Sharia law.

Keep in mind that this town hall meeting took place in 2012, but her words are still relevant today because she and others like her continue to think like this. Also keep in mind that the Islamic Society of Orange County claims to be a “non-political organization.”

“Over the last year, and due to the focus of House Republicans on so-called ‘Muslim radicalization,’ we have seen politicians and pundits attacking the Islamic faith as a security threat to the United States,” she said. “Across the country, these people are exploiting fear and trying to convince state legislatures that the state adoption of Sharia tenants is the strategy extremists are using to transform the United States into an Islamic country.”

Wow! There is far too much in just that one statement that is easily demonstrated to be true. First, as I always point out, there is no “radical Islam,” only Islam. Republicans need to get that right. Second, it wasn’t Republicans who tweeted this out: 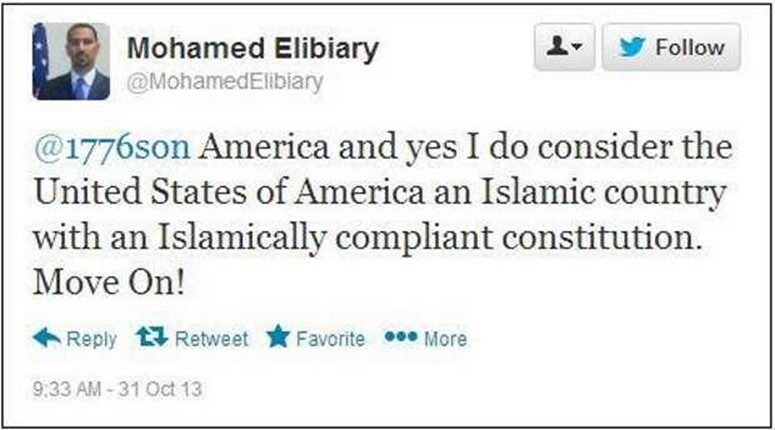 No, my friends, that is from a Democrat Islamic imam and former DHS advisor to Barack Hussein Obama, Mohamed Elibiary. Elibiary is championed by those Waters calls “extremists,” yet we know they are simply those that follow the teachings of Islam found in the Qur’an.

As for the strategy of adopting Sharia, well let’s be clear, Sharia is the law in Islam. It applies to Islamists as well as the infidels (at least in the Islamists minds). It is not championed by extremists, but Islamists. In fact, Islam is very optimistic in its view of dominating the world, just as Christians view the power of the gospel to do the same thing. Therefore, they seek to gain ground in every country they dwell in for the sake of Allah. This means a transformation of every country into an Islamic country.

As for the claim of strategy, one need only look to the goals of the Muslim Brotherhood to determine whether this is a strategy or a conspiracy theory. I’ll go with what the Muslim Brotherhood has written concerning this issue. Mrs. Waters is either ignorant (without excuse) or she is complicit. In either case, this woman is not fit to hold office.

She then declared that, at the time, at least thirteen states were looking to adopt legislation forbidding Sharia. What is wrong with that? We have a US Constitution. That’s the law in the US. Each State has a Constitution and as far as I know, not one of them is Sharia compliant. But what happens when states try and push forward this legislation? You guessed it, the Islamists and their socialist and communist friends come out of the woodwork to try and beat it down. Just look at Oklahoma, where the federal government tried to force them to overturn anti-Sharia law and to pay Islamists $303,333!

After speaking about Newt Gingrich’s call for Sharia not to be recognized by any court in the United States, she smugly declared that she doesn’t mind calling names and telling it like it is, but you will find absolutely no mention in her pre-written speech about the Muslim Brotherhood’s goals, will you?

In fact, the very document I reference speaks of:

Hmmm, global Islamic State, eh? I’m pretty sure Barack Obama knew about these goals before his speech the other night when he deceptively declared that the Islamic State was neither Islamic nor a state. But I digress.

Islam means to change the very culture you live in and the laws you live under America. If you have any doubts, understand that a current imam at the Islamic Society of Orange County and former president of the Islamic Society of North America, Muzammil H. Siddiqi, issued this fatwa on Islamonline.net (the link has now dead, but did find it in the web archives here).

“It is true that Islam stands for the sovereignty of Allah the Almighty and Allah’s rules are not limited to the acts of worship, they also include social, economic and political matters. By participating in a non-Islamic system, one cannot rule by that which Allah has commanded. But things do not change overnight. Changes come through patience, wisdom and hard work.

I believe that as Muslims, we should participate in the system to safeguard our interests and try to bring gradual change for the right cause, the cause of truth and justice. We must not forget that Allah’s rules have to be established in all lands, and all our efforts should lead to that direction.” (emphasis mine)

Our land was established on the teachings of the Scriptures of the Old and New Testaments, not the Qur’an, but Islamists are telling us their goal is to transform not just the US, but all lands into Islamic lands.

While she does state that national security must not target or single out anyone individually with techniques that focus on racial profiling, she claims to increase understanding and engagement. However, Islam is not a race. It’s an ideology. She attempts to do what Democrats always do and that is the same thing the homosexuals do: Equate a choice with a person’s skin color. To that end, she supported HR3618, which was a horrible piece of legislation that was thankfully not enacted.

Waters is right that we should not hold the entire Muslim community at fault for the violent acts of a few. The reality is that we have barely heard a peep from the Muslim community about terrorist attacks. In fact, in most cases, Muslims for the most part seem to be supporting them as evidenced in pro-Palestinian marches around the world, including in the US like this one here. However, every practicing Muslim holds to the Qur’an as the Word of God and as such, they have some explaining to do regarding what it teaches… usually that ends in deception rather than truth.

She then went on to quote the Southern Poverty Law Center, who claims that “hate groups” are at an all-time high. It’s funny that they don’t list themselves as a hate group. Since they failed to do so, I’ll just add them to my list of hate groups. But Waters went on to say the “radical right” terrorism was growing. As of yet, I haven’t seen them fly planes into buildings or behead their enemies.

One realizes that violence can erupt from various people. We are fallen and sinful. Of that, there is no question, but when a self-professed Christian engages in some act of random violence that is not self-defense or the defense of someone else, do they get shouted down? Absolutely. And why is that? It’s because they go against the teachings of Scripture. In Islam, that’s not the case, as has been demonstrated over and over.

While Waters quotes statistics of some in the Muslim community giving aid to stopping terrorist attacks and points out that across all ideologies there have been a number of terrorist attacks that have been thwarted. Again, one has to answer the question of the source of terrorism in those ideologies. In the case of Islam, it is their foundation, the Qur’an.

Though she claims there shouldn’t be racial profiling, she doesn’t say anything about mothers having their rights violated at the airports or grandmothers being held as a terrorist when buying a car that are supposed to be protected by the Fourth Amendment. She doesn’t raise the issue that the Islamic Society of North America is attacking your right to keep and bear arms that are also protected under the Second Amendment, does she? She doesn’t bring up the fact that federal attorneys, under Attorney General Eric Holder, have threatened you with fines and imprisonment if you speak out negatively about Islam, does she? No, she does not, because that would go against her assertions.

In conclusion, Waters continues to think America is a democracy when she is a Republic, and it is that very concept, if people keep advancing it, that enables those such as the Muslim Brotherhood and all their front groups, including ISNA, to advance their agenda. Keep that in mind America as you hold up the banner of Christ and advance the law in our Republic.
H/T Conservative Infidel