May the Federal Government Lawfully Make ANY Restrictions on Our Guns & Ammo?

Home » May the Federal Government Lawfully Make ANY Restrictions on Our Guns & Ammo?

The Truth is, that when WE THE PEOPLE “created” the federal government, we itemized (“enumerated”) in the Constitution all the powers WE delegated to it.

We nowhere delegated to any branch of the federal government power to restrict, infringe, etc., guns, ammo, etc.

So any federal laws or BATF (Bureau of Alcohol, Tobacco, Firearms & Explosives) rules for the Country at large which purport to restrict, infringe, etc., guns or ammo, are unconstitutional as outside the scope of the powers delegated to the federal government in Our Constitution.

This is what we need to get people to understand. Their misplaced focus on the 2nd Amendment as being the “source” of our right to keep & bear arms, has been a disaster:

Art. III, Sec. 2, cl. 1, enumerates the powers of the federal courts – it lists the types of cases they may hear. One category of case they may hear is “all cases or controversies arising under this Constitution”. The 2nd Amendment is part of the Constitution. That is how they claimed judicial power to decide the scope and extent of our “rights” under the 2nd Amendment; and hence, what federal restrictions on our “2nd Amendment rights” are “reasonable”.

Do you now see why you must point to The Declaration of Independence (2nd para) and assert that your right to keep and bear arms – to self-defense – comes from GOD and is Unalienable?

And yes, private American citizens can have armed ships! Remember the Privateers who fought the British ships in the War of 1812? Remember Letters of Marque & Reprisal (Art.I, Sec. 8, cl. 11)? Our Framers contemplated an American People who were so heavily armed that they could be Privateers, as well as wreak vengeance on our enemies via letters of Marque & Reprisal.

So be a patriot and buy a tank … or an armed ship! 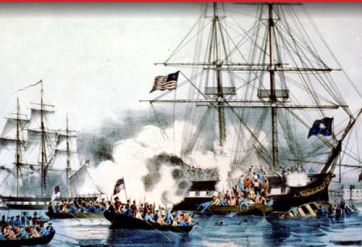 Originally Congress had very little problem with the Right of Citizens to own Warships, During some of our early conflicts Congress would contract (Letters of Marquee)with the owners to assist our Navy and raid enemy shipping.
‘In this painting the American privateer General Armstrong fires on British ships during the War of 1812 (painting by Nethaniel Currier, courtesy Library of Congress, LC-USZC2-1904).

Many Thanks to Grumpy Opinions for the photo and his caption.

Senator Lindsey Graham Is About To Get Maced By Nancy Mace

Senator Lindsey Graham Is About To Get Maced By Nancy Mace