35 Then Jesus asked them, “When I sent you without purse, bag or sandals, did you lack anything?” “Nothing,” they answered.

36 He said to them, “But now if you have a purse, take it, and also a bag; and if you don’t have a sword, sell your cloak and buy one.

Jesus’s view of gun control is made clear in Luke 22:35-36 when Jesus commanded his followers to purchase a sword in defiance of Roman law. Within the Roman Empire, to carry such a weapon was a crime punishable by death. I submit that this represents Jesus’ view of gun control, for when a government is permitted to disarm its citizens, genocide is usually what follows next.

Gun Control and Gun Confiscation Has Preceded Every Instance of Genocide In the 20th Century.

Twentieth century governments committed “democide” (i.e. genocide committed by government) to the tune of murdering 262 million of its own citizens, according to a University of Hawaii study. Just to give perspective on this incredible rate of murder by government, “this democide murdered 6 times more people than died in combat in” all of the wars fought in the 20th century.

How quickly we forget the lessons of history. If we ever allow government to subvert the second amendment, we very well could be witnessing a prelude to an American genocide.

There is nothing as dangerous to a totalitarian regime as an educated and well-armed populace. No Child Left Behind and Common Core are taking care of the well-educated variable. While Connecticut is leading the way in stripping Americans of their right defend themselves from a tyrannical government as called for by the Founding Fathers and the Second Amendment, these gun confiscation laws are taking care of the well-armed variable.

Before we strip away our last line of defense from an increasingly totalitarian government, by acquiescing to the United Nations and American advocates for gun control, perhaps we should examine a partial list of the end game resulting from past gun control efforts:

The total numbers of victims who lost their lives because of gun control is approximately 70 million people in the 20th century. The historical voices from 70 million corpses speak loudly and clearly to those Americans who are advocating for a de facto gun ban as proposed by the United Nations. Governments murdered four times as many civilians as were killed in all the international and domestic wars combined. Governments murdered millions more people than were killed by common criminals, and it all followed gun control.

Merry Christmas From the UN

The U.N. Arms Trade Treaty took effect on Christmas Eve. Even though the theory has very little chance of being ratified by two-thirds of the Senate, Second Amendment advocates are concerned that the Obama administration will use a United Nations treaty as a basis for executive action on gun control, as well they should be. Still others feel that this leftist gun control treaty becomes binding international law and any Executive Action by Obama would merely be an endorsement of our nation’s contractual obligation to support the UN ban on guns. Enough countries around the world have ratified it so the gun control treaty will now be enforced.

The founders included the words “shall not be infringed” for a reason. And they gave YOU the power to fight against any tyrannical government that would try to take your rights away.

The Most Egregious Portions of the UN Ban

• Article 2 of the treaty defines the scope of the treaty’s prohibitions. The right to own, buy, sell, trade, or transfer all means of armed resistance, including handguns, is denied to civilians by this section of the Arms Trade Treaty.

• Article 3 places the “ammunition/munitions fired, launched or delivered by the conventional arms covered under Article 2” within the scope of the treaty’s prohibitions, as well.

• Article 4 places all “parts and components” of weapons within the scheme.

• Perhaps the most egregious threat to the rights of gun owners in the Arms Trade Treaty is found in Article 5. Under the title of “General Implementation,” Article 5 mandates that all countries participating in the treaty “shall establish and maintain a national control system, including a national control list.” This list should “apply the provisions of this Treaty to the broadest range of conventional arms.”

• Article 12 adds to the record-keeping requirement, mandating that the list include “the quantity, value, model/type, authorized international transfers of conventional arms,” as well as the identity of the “end users” of these items.

• The agreement also demands that national governments take “appropriate measures” to enforce the terms of the treaty, including civilian disarmament. If these countries can’t get this done on their own, however, Article 16 provides for UN assistance, specifically including help with the enforcement of “stockpile management, disarmament, demobilization, and reintegration programs.” A “voluntary” trust fund will be established to assist those countries that need help from UN peacekeepers or other regional forces to disarm their citizens. THIS MEANS MARTIAL LAW OCCUPATION BY FOREIGN TROOPS WHO WILL HAVE NO HESITATION IN USING DEADLY FORCE AGAINST AMERICAN CITIZENS. 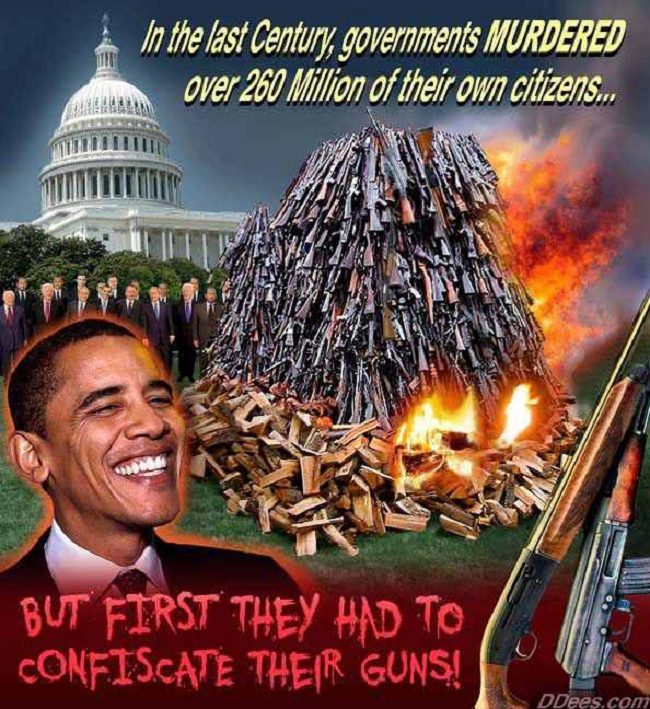 I would remind the reader that gun confiscation is not an end unto itself. It is a means to an end. For when the people are finally disarmed, the banking mafia that runs this country can have their way with this country with very little opposition. In the words of Jesus, we would be well-advised to never be without our swords (i.e. guns).

DID YOU CONSENT TO HAVING A FOREIGN ENTITY ENTERING YOUR RESIDENCE AND CONDUCT A ROOM TO ROOM SEARCH FOR GUNS?

The Founders: Look at their Fruit

The Founders: Look at their Fruit