In mid-October The Washington Examiner reported that Federal Officials only considered one firm to build the epic fail now known as healthcare.gov. When that story broke, you had to suspect that someone probably had a kickback coming. Richard Pollock reported on October 13th:

Federal officials considered only one firm to design the Obamacare health insurance exchange website that has performed abysmally since its Oct. 1 debut.

Rather than open the contracting process to a competitive public solicitation with multiple bidders, officials in the Department of Health and Human Services’ Centers for Medicare and Medicaid accepted a sole bidder, CGI Federal, the U.S. subsidiary of a Canadian company with an uneven record of IT pricing and contract performance.

CMS officials are tight-lipped about why CGI was chosen or how it happened. They also refuse to say if other firms competed with CGI, or if there was ever a public solicitation for building Healthcare.gov, the backbone of Obamacare’s problem-plagued web portal.

Why was CGI chosen and how did this happen? Good question. Could it be that a certain First Lady might have had an inside track with that company?

That would never happen. This is surely coincidence. But even though it is probably coincidental it pains me to report that a college classmate of Michelle Obama just happens to be a high ranking executive at CGI.

First Lady Michelle Obama’s Princeton classmate is a top executive at the company that earned the contract to build the failed Obamacare website.

Toni Townes-Whitley, Princeton class of ’85, is senior vice president at CGI Federal, which earned the no-bid contract to build the $678 million Obamacare enrollment website at Healthcare.gov. CGI Federal is the U.S. arm of a Canadian company.

Townes-Whitley and her Princeton classmate Michelle Obama are both members of the Association of Black Princeton Alumni.

Toni Townes ’85 is a onetime policy analyst with the General Accounting Office and previously served in the Peace Corps in Gabon, West Africa. Her decision to return to work, as an African-American woman, after six years of raising kids was applauded by a Princeton alumni publication in 1998.

Do you remember the controversial stories of Michelle Obama struggling to find her place as a black woman in a white world? Here’s a quick reminder from Leon Puissegur:

Michelle Obama attends and promotes a “Black Solidarity” event for guest lecturer Manning Marable, who was, according to Cornel West, probably “the best known black Marxist in the country.” The event is the work of the Third World Center (TWC), a campus group whose board membership is exclusively reserved for minorities. 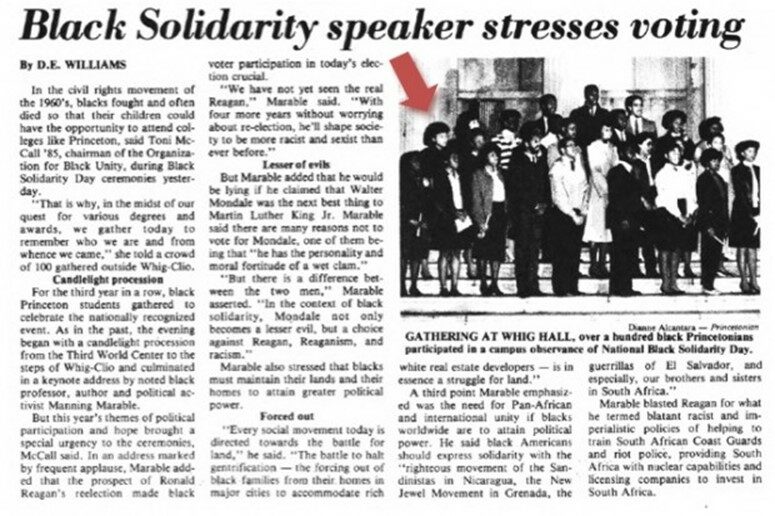 A classmate of Michelle’s identified her to TheBlaze as the second person on the left. Article/photograph taken from The Daily Princetonian – Vol. CVIII, No. 107 November 6, 1984

Even her thesis was about her “blackness.” Here is a quote from her groundbreaking racist work courtesy of Politico:

“My experiences at Princeton have made me far more aware of my ‘blackness’ than ever before,” the future Mrs. Obama wrote in her thesis introduction. “I have found that at Princeton, no matter how liberal and open-minded some of my white professors and classmates try to be toward me, I sometimes feel like a visitor on campus; as if I really don’t belong. Regardless of the circumstances under which I interact with whites at Princeton, it often seems as if, to them, I will always be black first and a student second.”

She is so torn up with the plight of blacks, who have the misfortune of going to Princeton, that she had no choice here but to give one of her struggling Ivy-League educated unfortunates a leg up.

So she somehow threw a bone to a fellow black woman who just happened to have a job at a firm that was deemed capable of handling a 678 million dollar government contract. Whether she did it for the cleansing of her black soul or the joy of a kickback we may never know.

What we do know is that this would seem to fit with Michelle’s hatred for anyone who is not black and not socialist. I wonder if she hates Barry’s white side.

I wish she would show some sympathy for a white guy who was not smart enough or rich enough to go to Princeton. Princeton currently costs over $58,000 yearly to attend.

I am obviously having some fun with this but it’s very serious.

How stupid was it that only one bid was considered and how convenient is it that Mrs. Obama just happens to have ties to the company that was awarded this contract?

I’m not a computer guy, but I’m thinking that Microsoft or Apple, or even those guys who make World of Warcraft might have done one hell of a job on this site. They might have even been able to do it for less money, but then the First Lady may have had to forego her door prizes, and I’d hate to see that.

White House Tries to Spin Obamacare As Penalty Not Tax

White House Tries to Spin Obamacare As Penalty Not Tax