Is it true that America is moving toward a militarized police force, a force that is more intent on taking out the trash than in building bridges with the community? It seems that this is the case, though numerous apologists for law enforcement say things are overblown and if not for the writings of Radley Balko and Peter Kraska, no one would even be paying attention. One article supporting police efforts and techniques says that all of these complaints and articles about alleged police militarization is little more than disinformation. Is it?

Maybe things have simply become more apparent due to the increased level and availability of technology. But that would not account for increased use of tactical gear, included armored vehicles, would it? I touched on this in a recent article. 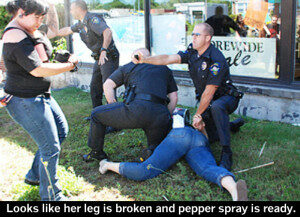 A former Marine tells one group that America is building a domestic army. He states that the reason the government is doing that (via Department of Homeland Security) is due to the fears the government has regarding its citizenry. “The comments by the Colonel Peter Martino were made during public testimony at a Concord City Council meeting on Tuesday. The meeting concerned a decision on whether to accept a $260,000 Homeland Security grant on behalf of the Central New Hampshire Special Operations Unit to purchase a BearCat armored vehicle.” People who attended the meeting had signs that read “More Mayberry – Less Fallujah!” showing that they had grown disgusted with the fact that more police departments are taking a military approach toward law-abiding citizens.

I understand that SWAT teams began in the 1960s and were originally used to meet force with force, in rare instances when things really had the potential to get ugly. It is because of concerns for safety for officers (and civilians) that these SWAT teams came into being. The problem though is that it appears to average citizens as though the cops are mainly interested in keeping themselves safe. Again, I understand that they want to go home each night after their shift and when push comes to shove, they are going to do what they can to make that happen.

One notable case occurred in Florida recently. “Two weeks ago, two Florida deputies shot 15 rounds at a 60-year-old unarmed Florida man who was looking for his cigarettes in his mother’s car, parked in his own driveway. Two of those bullets hit him in his left leg, which was shattered. Roy Howard Middleton says he was compliant when the cops told him to turn around. He says that as he was turning around to face deputies with his hands raised, they opened fire. (He believed his neighbors were playing a practical joke on him). The two deputies said they were responding to a 911 call about a car thief and that Middleton turned and ‘lunged’ at them with a shiny object in his hand. Middleton is black. The two sheriff’s deputies are white.”

I studied that case from a variety of sources and the gentleman who was retrieving his cigarettes did nothing wrong. According to one witness, the police just opened fire on him. Why does this “shoot first and ask questions later” mentality exist? Because it comes from the top down. This is the message that’s given to the cops on the street from superiors. The Sheriff in this case did what he could to downplay the incident and exonerate the officers. “Sheriff David Morgan of Escambia County hastily took to the airwaves to explain that ‘the tragedy of this is the noncompliance to the directions of law enforcement officers,’ and that Middleton was ‘both a suspect and a victim’.”

Notice that the Sheriff stated that this was a case of “noncompliance.” Based on what, or whose testimony? This same law enforcement department was in the news not long after the above incident. “A week later six Escambia County deputies climbed through the window of a private residence, without a warrant, dragging a sleeping couple out of their bed, shooting at their two dogs, one of which later died.”

It turns out that the officers were chasing down a suspect and they said they knocked on the front door of a home and received no response. They then let themselves into the home through an opened window. “The couple, who are white, say they were asleep in bed. Then the cops threw them on the ground, handcuffed them and dragged them into the hallway, and then started shooting at the dogs. No arrests were made. That case is also being investigated.”

Let’s consider the facts of just these two cases, based on what we know. In the first situation, Roy Middleton was shot at 15 times by officers at fairly close range. He did not die, but please don’t tell me that they were not trying to kill him. Fifteen bullets? They hit him twice, in the leg, by the way. Had they actually been decent shots, Middleton would now likely be dead instead of recovering. The officers said Middleton “lunged” at them and had a “shiny” object in his hand. There is no indication that the officers actually identified themselves. Middleton says all he heard was, “Get your hands where I can see them.” Aren’t they supposed to say something like, “Freeze. Hands in the air. Police Officers” or something that identifies them as law enforcement?

In the second scenario, did the police have the right to even enter that home? They did not have a warrant. They said they knocked and no one answered so they did what most thieves would do after it’s confirmed that no one is home. They simply entered the premises figuring they won’t encounter any problems.

But remember, the officers said they knocked and no one responded. Yet, when they entered the home, they apparently woke two dogs. My question is how the dogs didn’t hear them knocking? Were the officers that limp wristed with their knock that even two dogs could not hear them?

Dogs sleep pretty lightly and they’re very territorial. In this case though, according to the officers, the dogs didn’t hear anything until after the officers got inside the house. The occupants were still asleep as well, which means the dogs hadn’t started barking yet. Something’s weird. Either the dogs were very old and very hard of hearing or the officers did not knock.

We also learn, “Upon encountering the people in the house, the dogs became aggressive. One dog bit at one of the deputy’s leg. He pushed the dog away, but it came at him again so he shot the dog in self-defense, at which time the second dog began to run towards him. For his personal safety, he shot the second dog.”

I see. Both dogs did what was natural for them to do. The police came into the dogs’ territory and when the dogs defended their turf, the cops shot the dogs in “self-defense.” The officers had no right to be in that home and had they obeyed the law and obtained a warrant, things might have been different. Instead, they flaunted the law and did what they felt was expedient even though it meant eradicating someone’s rights.

I would be inclined to say we are not in a police state if things like these two incidents were few and far between. But they appear to be evolving into the norm for too many Americans. Something needs to be done about it or we can kiss our Constitutional Republic good-bye.

I’m not done with this subject and will be back with more soon.