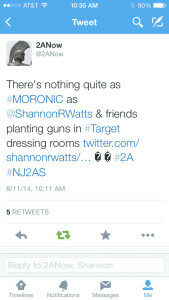 Pointing out the obvious to Moms Demand Action.

In a asinine twist of reality, Shannon Watts – founder of Moms Demand Action for Gun Sense in America, an anti-gun, anti-2A group – love to make the Second Amendment (2A) appear to be the problem in America. Their unbridled hatred of guns and the 2A seems to know no bounds and it is an understatement to say that it obviously clouds their thinking on the matter.

First of all, the name of the group is a bit misleading. Moms Demand Action for Gun Sense in America makes it appear as though they only want more so-called common sense laws created to reduce gun crime. Unfortunately, aside from the fact that there are already plenty of common sense gun laws in effect, some of their members or at least those who side with them tell us a difference story.

They won’t stop until the 2A is gone and with it the law-abiding citizen’s right to carry. No word on how they will eliminate guns from the hands of the criminals.

Or this one in which the individual clearly wants the 2A eliminated.

Finally, for those who doubt the true intentions of anti-gunners, here it is:

The problem of course is that not once have I read anywhere the plan from these anti-gunners to remove guns from criminals. There is no plan. Even Sen. Dianne Feinstein noted that by limiting or eradicating certain guns from society, it would affect criminals, but it would take time (paraphrase). This isn’t even true when we consider the fact that guns are routinely brought into this country illegally from Mexico and sold on the black market. This is fact, yet these anti-gunners obviously don’t even take that into consideration at all. They don’t even think that far.

They essentially want to create an America that is completely “gun free” (except in your homes), but criminals will no sooner note and obey that than they do today. Gun free is simply an invitation to all criminals to bring their guns because they are fairly certain they will meet with no resistance. This is what people involved in groups like Moms Demand Action will bring about in society if they have their way.

In response to @jashsf, another individual said the following.

The reality is very simple. Guns exist. Like drugs, people will obtain them and they will do so illegally if necessary. Beyond this, making a gun that fires a 12-ga shotgun shell is not difficult at all. 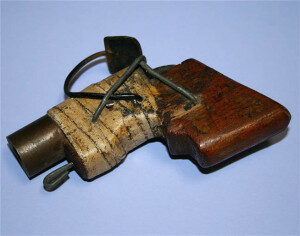 The street gangs in the 1950s in NYC had what are known as “zip guns” that fired .22 bullets one at a time. They were homemade then and are still homemade now. In fact, prison guards routinely find them in cells of prison inmates since it is fairly easy to make one that is extremely basic to something much more complex.

Yet, we have these “moms” who want to eliminate the 2A as if that will make criminals say, “Wow, I’d better stop carrying my concealed weapon illegally now.” Um…it won’t happen. They are already breaking the law because they’re the only group of people who do not go through the trouble of obtaining concealed weapons permits, which involves providing a set of fingerprints and undergoing a criminal background check.

Criminals simply lay out cash on the street for the gun they want and then start carrying it. Moms Demand Action and groups like them have absolutely no plan to disarm criminals and if they were honest, they would know they can’t. So what do they do instead? Go after law-abiding Americans who have jumped through the legal hoops to obtain a concealed weapons permit or to simply buy a gun and remain within the law as they own that gun.

We have all sorts of laws against illegal drugs, yet not one of those laws has ever helped reduce the drug culture. Drugs are still smuggled into this country big time and there is nothing that law enforcement can do to eradicate it.

IF the 2A was ever eradicated, criminals would still have guns. It is so simple that even a caveman can appreciate it. Apparently, that is too high for Moms Demand Action for Gun Sense in America though.

When alcohol was outlawed, we entered a period known as Prohibition. Did the alcohol stop flowing? Nope. It continued to flow and it made the mob very wealthy. Eventually, Prohibition came to an end because it did the exact opposite of what it was intended to do.

Too many people believe that the 2A grants the right to keep and bear arms. It doesn’t. It simply recognizes the right that already exists, given to us by our Creator. This is why it says it “shall not be infringed.”

It boggles my mind to read so-called arguments from people like @jashsf and others who truly believe that by eliminating the 2A, gun crime would be reduced to nothing. They would say that one life saved is worth it. The issue they refuse to deal with is found in their own propaganda that ignores the fact that guns actually save lives. Women have used guns to protect themselves from criminals. Others have used guns to save lives as well. These facts are clearly ignored by the left because it doesn’t fit with their agenda. For them, guns have no good purpose at all.

Criminals commit crime and many do it with some type of weapon. Guns are easy to conceal and easy to obtain. Getting rid of the 2A would not reduce the fact that criminals obtain, conceal, and use guns every day. All it would do is create a society in which the innocent would not have access to guns as they face criminals who still would.

People like those involved with Moms Demand Action for Gun Sense in America have no critical thinking skills. They wrongly believe that the 2A is the problem when in point of fact, it’s the criminal who is the problem. His access to guns is not determined by the 2A. It’s determined by the availability of guns on the black market and eliminating the 2A would create more of a need and expand the black market. Guns would not be eliminated from society. They would simply become thoroughly unregulated.

In essence, eliminating the 2A or further restricting guns would create the same situation that existed under Prohibition, but apparently, those against guns haven’t thought this all through carefully enough. But then again, that seems to be a consistent motif of the left, not thinking things thoroughly through.