The media is taking aim at Trump over the shootings and he responded in a manner that would make any Democrat smile.

“Well, I’d like to think about it,” Trump said in an interview with Piers Morgan on ITV’s Good Morning Britain. “I’m going to seriously look at it.”

While Trump said he didn’t “love” the idea of a ban, he also was unhappy to see the frequency and severity of mass shootings in the United States, according to Bloomberg.

The shooter used two legally bought .45 caliber handguns, with a suppressor, in the attack. The shooter was shot and killed by police.

Virginia’s Democratic governor, Ralph Northam, said Tuesday he will summon lawmakers back to the state Capitol to consider a package of gun-control legislation.

Republicans control the state’s legislature, however, if Trump is showing some support for more gun control, it’s possible other Republicans will follow in lockstep.

Northam’s proposals include a ban on silencers and high-capacity magazines.

He also seeks to limit handgun purchases to once a month – meaning the government will be tracking your purchases.

A ban on silencers will literally do nothing to stop mass shootings.

No gun law will stop mass shootings, but silencers only make the sound quieter.

It’s as pointless as a bump stock ban. 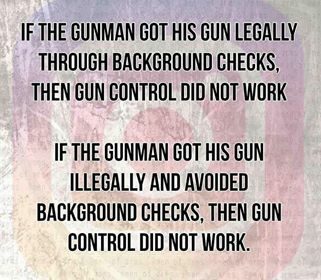 There’s a lot of talk of gun control once again and everyone claiming they have authority over the lives of others seem to think the blame lies on the shoulders of those who have committed no offense and violated no one’s rights.

But the power-hungry politicians are all too happy to trample all over our rights and punish good people for the acts of psychopaths.