Mr. President, Your Predecessor Actually Wire Tapped ALL Of Our Phones… What Are You Going To Do About It?

President Trump went on a Tweet storm this morning, presumably because at some point in the last 24 hours he learned that his predecessor President Obama reportedly “wire tapped” the phone lines in Trump Tower during the 2016 election campaign.

In the process of tweeting, the President actually confirmed what many of us already know – we are being actively monitored by a domestic police state. 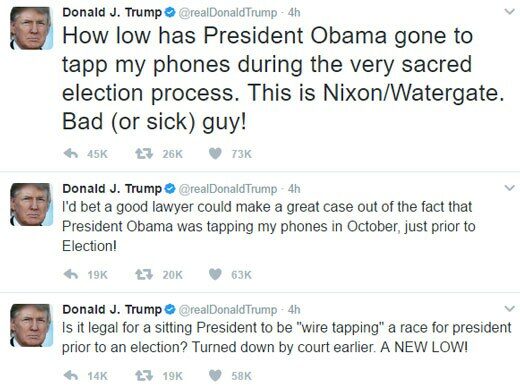 We can fully sympathize with the President’s outrage over being wiretapped, but it should be no surprise to our readers. Back in 2011, we noted, to accusations of being conspiracy theorists, that everything Americans do is being monitored, including real-time monitoring of our locations, conversations and even video.

At the time, our claims may have seemed ridiculous to most Americans. However, it was soon revealed by NSA whistleblower Edward Snowden that U.S. intelligence agencies had an incredible new program designed to do exactly what we originally described: full-on monitoring of literally every digital interaction in the world. We’re talking emails, phone calls and even the ability to remotely and secretly turn on the microphone and camera on your digital devices.

We realize this may be hard to digest for most, but the technology is very real and very capable, as evidenced by the following video clip from the recently released Snowden movie, which shows just how advanced the intelligence community’s capabilities really are:

While we have absolutely no doubt that these high-level surveillance tools were actively monitoring then-candidate Trump in 2016, it is necessary to stress the fact that the surveillance state did not disappear with Trump’s victory.

Thus, Mr. President, if you are outraged about being monitored and recorded, even when you have done nothing to warrant such surveillance, we have but one question: What are YOU going to do about it?

The Miscarriage of Justice Against Judge Roy Moore

Sticks and Stones – Advancing Constitutional Principles in the New Media

Sticks and Stones – Advancing Constitutional Principles in the New Media