Last September, a highly respected Muslim Brotherhood expert named Abdel Reheem Ali made some very explosive claims in an article that appeared on the El-Mogaz website. The reason we haven’t referred to this article sooner is that Ali’s claims seemed exaggerated and there was no sourcing. So we moved on… 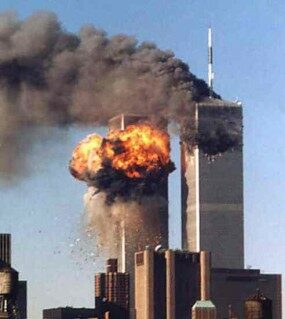 Based on our most recent discoveries (here, here, here, here, here, here, and here) about President Barack Obama’s brother Malik Obama – particularly about evidence linking Malik’s Islamic Da’wa Organization (IDO) to officially designated terror organizations, as well as a Sudanese bank linked to Osama bin Laden – the claims made by Ali deserve an honest analysis. Malik’s expressed desire to eliminate Israel, as well as his confirmed ties to terrorist groups and individuals demand it. However, as a caveat, we must stress that there are still some aspects that are unconfirmed and may still be exaggerated. Nonetheless, here is the relevant excerpt from the El-Mogaz article, which we will analyze and deconstruct below said excerpt (translated):

Dr Abdul Rahim Ali, probably the most prominent expert on the Muslim Brotherhood, its secret relationships and movements stated that, “Malik Obama has much to do with the international organization of the Muslim Brotherhood and attended all meetings of the organization that declared war in 1996. He is a war criminal and terrorist.” He added, “Had this been revealed prior to the election, during Barack Obama’s campaign, Malik’s brother would not have been elected. It was he (Malik) who brought in Khairat Al-Shater, Ayman Ali and Youssef Nada to meet with Obama during the election and pledged the support of Muslims in America. Obama employed the Secretary of State for the escalation of the Muslim Brotherhood in any way shape or form, and there is a report prepared by one of the intelligence units confirmed that Mohammed Mursi was the President of the Republic before the results were even announced.”

The two most explosive claims, which we will analyze, are:

Before getting to our analysis of these two charges, there are two independent reports of action and inaction respectively, by the Obama administration that would serve to relieve future political pressure on Malik for his terror ties.

Now, on to Ali’s two most explosive claims…

How far back do Malik Obama’s ties to Sudan go?
The key to proving or disproving claim number one is determining when Malik Obama joined the IDO. As of yet, this has not been determined. We do know that Malik is a prominent figure within the IDO now, which is an arm of the Sudanese government, still listed as a U.S. State Department-designated State Sponsor of Terrorism and has been since shortly after the first World Trade Center attack in 1993. Malik’s boss, Suar al-Dahab, sits on the IDO’s Board and none other than Sudan President Omar Al-Bashir oversees the IDO. Conversely, the Global Muslim Brotherhood Daily Watch (GMBDW) plays it so safe, it practically runs interference for Malik. GMBDW implies that the IDO adopted Malik to capitalize on the Obama name and that there is no real evidence connecting him to the Sudanese branch; this is nonsense we have refuted with multiple sources.

Following GMBDW’s rationale, Malik didn’t join the IDO until after his brother burst on the national scene, which would have been no earlier than 2004 and probably years later. Based on Ali’s claims, Malik was with the IDO long before then. Further backing up Ali is a report posted by the Al-Masry Network, which includes the posting of two ‘Top Secret’ documents from Egyptian Security forces; we wrote about that here.

Here is what Al-Masry says about when Malik began his tenure with IDO (translated):

According to sources confirmed by News Network Egyptian “U.A.M.” national security investigations include the Organization of the Islamic Dawa (IDO), a non-profit organization founded by the Sudanese government… and headed by Malik Obama since 1981 to support the regulation of the International Muslim Brotherhood and its assembly, which is overseen by Sudanese President Omar al-Bashir. He (Malik) personally collects donations from Muslims in all countries of the continent of Africa to support organizations and Islamic groups around the world, led by the Muslim Brotherhood and the international organization.

While the claim that Malik’s tenure with the IDO began in 1981 cannot be independently verified at this point, much of those other claims can be. In particular, the claim that Malik is a prominent figure with Sudan’s IDO and that Al-Bashir oversees it are confirmed via photos posted to Malik’s own website: 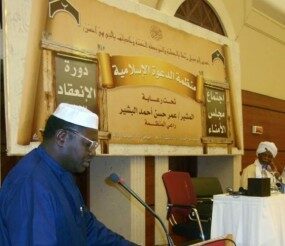 So, is GMBDW’s claim that Malik is a token IDO member who was adopted based on his relationship to the U.S. President accurate or is Ali correct? Does the truth lie somewhere in the middle? We still don’t have the answer to that but one thing is indisputable. Malik Obama works for an organization whose founders and leaders are linked to both attacks on the World Trade Center.

It is worth noting that Sudan had a strong connection to the first WTC attack in 1993, an attack for which Sheikh Omar Abdel Rahman (the ‘Blind Sheikh’) is serving a life sentence in the U.S. 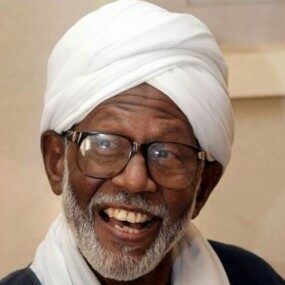 If there is one figure in Sudan who is directly tied to the masterminds of both WTC attacks, it is a man named Hassan al-Turabi; he was extremely close to the ‘Blind Sheikh’ and Osama bin Laden. Al-Turabi is credited with founding the organization that Malik Obama has helped lead for years – the IDO. Malik’s membership with the group warrants a question: Has he ever met with al-Turabi?

We encourage you to read this previous report of ours that details Turabi’s complicity in acts of terror against the U.S.

GMBDW seems to lack significant journalistic and intellectual curiosity on an issue of national security.

Brokering Talks between Muslim Brotherhood and the White House
The second explosive charge made by Abdel Reheem Ali is that Malik Obama brokered a meeting between President Barack Obama and Khairat al-Shater and that during that meeting, al-Shater pledged to get Muslims in America to support Obama’s election for President (we presume Ali is referring to Obama’s 2012 re-election):

It was he (Malik) who brought in Khairat Al-Shater, Ayman Ali and Youssef Nada to meet with Obama during the election and promised to support Muslims in America.

At minimum, this very much appears to be an exaggerated claim as there is no evidence that Barack Obama and al-Shater met.

However, there was a Muslim Brotherhood delegation that visited the White House about six months prior to Obama’s 2012 re-election. That delegation’s visit to the U.S. coincided with the announcement that al-Shater would be running for president of Egypt.

The delegation included Abdul Mawgoud Dardery, a Muslim Brotherhood member and Member of Parliament at the time; Sondos Asem, a senior editor with Ikhwanweb, the Muslim Brotherhood’s official publication; Hussein El-Kazzaz, a Brotherhood economic adviser, and Khaled Al-Qazzaz. All four members participated in a panel discussion at Georgetown University during their visit to the U.S. The discussion was moderated by John Esposito, a renowned Muslim Brotherhood apologist.

During the group’s visit to the U.S., Sondos – whose mother (Manal Abu Hassan) is a leader with the Muslim Sisterhood along with Saleha Abedin, the mother of close Hillary Clinton adviser Huma Abedin – reacted to the news that al-Shater would be running for President, via CNN:

As Asem settled into her hotel room in New York and prepared to meet with a prominent news organization’s editorial board, she got word that her boss had decided to run for the presidency of Egypt.

“Wow! I can’t believe it,” she exclaimed.

So, during her trip to the U.S., Asem’s “boss” (Khairat al-Shater) announced he would be running for president, an interesting coincidence.

As for representatives from the Obama administration the delegation met with, they included two mid-level members – Samantha Power and Steve Simon. At the time, Power – wife of former Obama Czar Cass Sunstein – was Senior Director for Multilateral Affairs at the National Security Council. Simon was the National Security Council Senior Director for the Middle East and North Africa.

In the White House press briefing at the time, Press Secretary Jay Carney attempted to dismiss Power and Simon being in the meeting by pointing to the fact that Senators John McCain, Lindsey Graham, and Deputy Secretary of State Bill Burns had met with members of the Muslim Brotherhood. Interestingly, it was McCain, Graham, and Burns who appeared to be in damage control mode during their visit to Egypt shortly after Mursi was removed from power (see below).

Khairat al-Shater (L) with his son Saad (R). Claims attributed to Saad about his father, bolstered by Brotherhood expert.

If al-Shater collaborated with the Obama campaign through emissaries like Dardary and Asem to help Obama get re-elected, al-Shater would be considered an extremely important and dangerous figure to the administration; potentially, even more so than Mursi. This comports with charges allegedly levied by Saad al-Shater, via reports of an interview he granted to Anatolia Press:

Saad also said that his father’s safety is more important to the Americans than is the safety of Mohammed Mursi.

Not long afterward, Saad was arrested in Egypt.

At the time, even Fox News / AP reported:

It was not immediately clear why police detained el-Shater’s 23-year-old son. Officials only said Wednesday that police had arrested Saad el-Shater and that he had threatened to release documents allegedly showing ties between his father and U.S. President Barack Obama. Officials did not elaborate.

Let’s not forget that Senators John McCain (RINO-AZ) and Lindsey Graham (RINO-SC) went to Egypt as emissaries for the Obama administration in an attempt to secure the release of Muslim Brotherhood leaders who had been imprisoned there. Al-Shater and Mursi were two such leaders.Deputy Secretary of State Bill Burns met secretly with al-Shater for 90 minutes despite the efforts of former Clinton Foundation employee, Mursi adviser, and al-Shater Chief of Staff – Gehad el-Haddad – to deny then diminish the importance of the meeting; he said it lasted only ten minutes.

El-Haddad and his father, Essam el-Haddad, are both currently in prison as well. The ‘Top Secret’ documents we wrote about last month also name Essam el-Haddad as being a participant in a very secret meeting with REPRESENTATIVES FROM SUDAN’S IDO.

The elder el-Haddad met secretly with IDO officials and the younger el-Haddad worked for the Clintons for five years:

As for Ali’s claims that the Secretary of State (Hillary Clinton at the time) was selected to help the Muslim Brotherhood rise in power, coupled with the charge that Mursi was essentially selected to become Egypt’s president before the election…

Last December, it was learned that in comments attributed to Mursi’s wife – Naglaa Mahmoud – her and her husband had been ‘recruited’ by the Clintons in the 1980′s and that the two couples are close friends.

One of the other three Muslim Brotherhood representatives Abdel Reheem Ali reports joined al-Shater in helping Barack Obama get re-elected is Ayman Ali. This figure is extremely prominent and notorious. As we have reported, Ayman Ali worked for a group known as Taibah, which was identified by the U.S. and the U.N. in 2004 as a terrorist entity.

Essam el-Haddad worked as a close adviser to Mohammed Mursi. According to El-Fagr, Ayman Ali did as well.

Regardless of whether you think Abdel Reheem Ali exaggerated or got some things wrong, one thing is clear.

He’s definitely on to something.

Abdel Reheem Ali: Something to his explosive claims?

The Death of the American Welfare State