Muslim Brotherhood's Hamas-CAIR: American Media is 'Lazy and Gullible' – Take Advantage of That

“Islam isn’t in America to be equal to any other faith, but to become dominant.”

“The Koran, the Muslim book of scripture, should be the highest authority in America, and Islam the only accepted religion on earth.”

That is the claim of a man who is the founder of CAIR, a Muslim organization that was also an unindicted conspirator in the Holy Land Foundation scandal, and has been linked to money laundering for Islamic jihadists in our nation’s capitol. Does it at all sound moderate to you? Right, it doesn’t to me either. 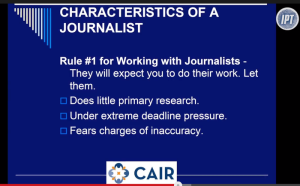 However, what is even more disturbing is the way Americans are accepting the method of taqiyya in order for Islam to advance its agenda in the West. CAIR presents itself as “moderate,” but as I’ve told you over and over, there is nothing moderate about Islam. In fact, we have seen CAIR actively intimidate others to shut down Pamela Geller’s talks where she exposes both CAIR and Islamic jihad. We have seen them demand and get Islamic prayer and special privileges in public schools.

We also see an administration that actively covers for and diverts attention from this Islamic organization and others like it.

Pamela Geller recently wrote about the means of stealth jihad in the United States and included video that documents how it is being taught. She writes:

A segment in the Investigative Project on Terrorism’s new award-winning documentary “Jihad in America: The Grand Deception” focuses on stealth jihadists and how they try to control public perception. Part of it is by manipulating a lazy and gullible media. But another part is to shut down any criticism of Islamist ideology — the notion that society is best governed by Islamic law. During a recent panel discussion on the film, panelists — including two anti-Islamist Muslims — discussed the way phony accusations of “Islamophobia,” or bigotry, are used to stigmatize critics.

“Media in the US is very gullible…If you have something to say, especially as a Muslim; they’ll come running to you. Take advantage of that!”

Commentary Magazine says CAIR is nothing more than a “political front for Hamas,” and Hamas was created by the Muslim Brotherhood.

CAIR is merely a wolf in sheep’s clothing, but there are occasions, like in the video above where the wolf shows you its teeth. As Bob Taylor writes, “no matter how genteel CAIR may appear on television, they are still a mouthpiece for Islamist ideals. CAIR uses deception as a means creating the public perceptions they desire.

With the aid of the federal government, which threatens sites like Freedom Outpost for voicing opposition in exposing the truth about Islam, CAIR seems to be well on its way to advancing its real agenda: A Western caliphate headed by the United States under the black flag of jihad.

Trailer Released for “The Other Interview”: The Film That North Korea Doesn’t Want You to See

Trailer Released for “The Other Interview”: The Film That North Korea Doesn’t Want You to See