Did anyone with a modicum of common sense expect that what was happening in Europe would not happen here? They are suffering more deeply, of course, because they imported millions of Muslims. The US moved more slowly, but Obama is accelerating the process. So expect the same kind of Islamic terror in American neighborhoods with high Muslim populations.

This news reporting is astonishing. First, because of the obvious. These vicious Muslim gangs are parading through unprotected neighborhoods shouting threats and rape warnings while destroying the property of homeowners. And their actions are escalating. Secondly, no big media is even talking about it. The little media coverage it got scrubbed the “Muslim” (Somali) out of it. But if someone leaves bacon in front of a mosque, it’s a national news story accompanied by cries and wails of “a plague of Islamophobia raging across the country,” “Muslims fear for their lives” … and all those outrageous lies designed to shut us up.

Screen shot of KTSP TVreport in Minneapolis reveals ‘Somali males’ entered and harassed neighbors near Lake Calhoun. No mention of ‘Somalis’ appeared in the verbal or written TV reports and the city’s largest newspaper, the Star-Tribune, ignored the story.

A mob of up to 30 young Somali men paraded through one of Minneapolis’ more upscale neighborhoods last week, yelling disparaging comments and threats against homeowners. 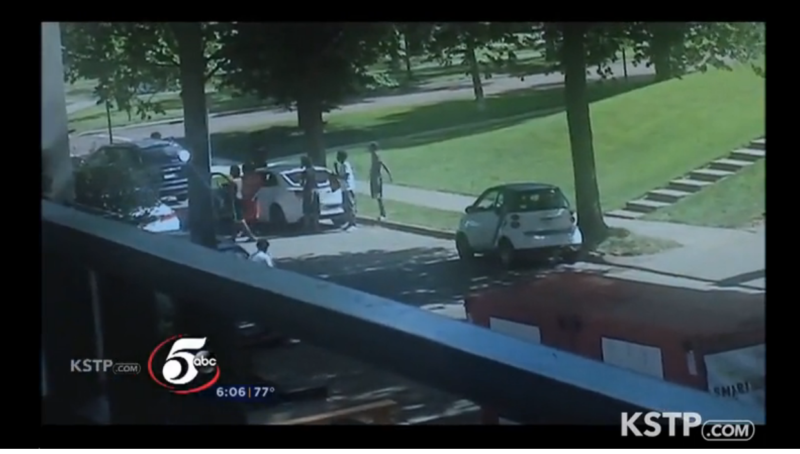 A female resident of the neighborhood, obviously shaken in a TV interview, related how she was screamed at by a Somali man who threatened to kidnap and rape her.

Somalis living in Minneapolis are almost all Sunni Muslims, and residents of the Lake Calhoun area say this isn’t the first time a group of Somali men has made an intimidating march through their neighborhood, which is filled with million-dollar homes.

No hate-crime charges are apparently being considered by either the Minnesota authorities or the Obama Justice Department headed by Loretta Lynch.

Police were called to the scene on June 28 about 9:30 a.m. and are investigating the incident as a potential case of terroristic threats. No arrests have been made, and the Minneapolis media appear to be largely uninterested in reporting on the mob threats.

According to a Minneapolis police report, between 20 and 30 young Somali men showed up in front of a woman’s house about 9:30 in the morning and started shouting insults. “The comments turned to threats,” the report said.

Nearly all Somalis living in Minnesota are either refugees or children of refugees. They form a burgeoning Muslim enclave created by the U.S. government’s long-term refugee policy.

The U.S. State Department, working with the United Nations, has permanently resettled more than 132,000 Somali ”refugees” into dozens of American cities since 1983, according to federal data collected by the State Department.

Over the last decade, the feds have resettled an average of 7,000 Somali refugees per year into the U.S., with Minneapolis-St. Paul receiving the largest number, followed by Columbus, Ohio, San Diego, Seattle and Atlanta. Maine, Texas, North Dakota, Tennessee and even Alaska have also received dozens if not hundreds of Somali refugees.

A check of the Star-Tribune website, Minneapolis’s largest newspaper, did not turn up a single story about the June 28 terror-threatening run through the Lake Calhoun neighborhood.

KSTP Channel 5, an ABC affiliate in Minneapolis, never mentions that those making the alleged terroristic threats were Somalis. The station’s video report by Brett Hoffland, however, zooms in on a police report highlighting that the suspects were “approximately 20-30 Somali males” who were making “comments” that turned to “threats.”

“Multiple young men have been harassing them,” Hoffland reported.

“We couldn’t get them out,” a woman tells Hoffland from behind shadows, her voice digitally altered to protect her identity. “We didn’t know what to do.”

When the shouts of “We’re going to rape you” rang out, “it was just a very traumatizing experience,” the woman said.

The Somalis were driving onto the sidewalk and onto the homeowners’ lawns, “all while shooting off bottle rockets and screaming” their threats, she said.

“It’s a scary thought especially for those who have young children.”

It’s not the first time they’ve showed up, but on June 28 the threats were “much more personal,” the female resident told KSTP.

The Minneapolis Police Department told KSTP it has opened an active investigation, and police were taking it “very seriously.”

The Somali refugee program has been among the most widely criticized of all refugee programs for the lack of assimilation that the Somalis have exhibited over the past 30 years. At least three-dozen Somali men from Minnesota have been charged since 2007 with trying to leave the U.S. and join overseas terrorist organizations including the Islamic State and al-Shabab. Others have been convicted of providing material support to terrorist organizations. That prompted the state’s U.S. Attorney Andrew Luger in April 2015 to admit that “Minnesota has a terror recruitment problem,” but he stopped short of saying the “S” word.

Minnesota politicians and media have for the most part toed the line of political correctness whenever crimes or terrorist activity surfaces involving Minnesota’s Somali community, say local activists.

The Cedar Riverside area of Minneapolis is often called “Little Mogadishu” for its swelling Somali community. The city’s mayor, Betsy Hodges, has in the past showed up for meetings with leaders of the local Somali community dressed in a hijab – the headscarf worn by Muslim women as a sign of their submission in a male-dominated society governed by Shariah law. 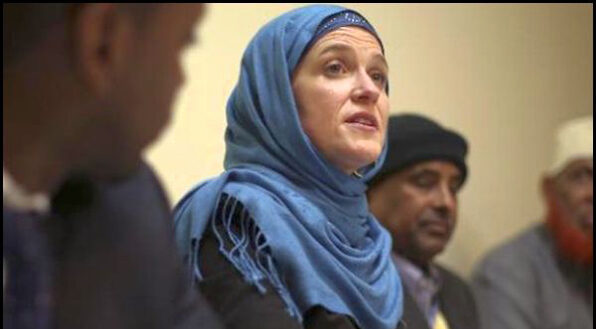 Last year, Ami Horowitz of the David Horowitz Freedom Center filmed a series of interviews on the streets of Minneapolis’s Cedar Riverside community, and the vast majority of Somalis he spoke with said they preferred Shariah law over U.S. law, WND previously reported.

Governor tells critics of multiculturalism to ‘find another state’

Yet Minnesota Gov. Mark Dayton, a Democrat, has let it be known his commitment to the multicultural model, the same model followed by the European Union which is now breaking apart, is unwavering.

Last October, Dayton told those attending a town-hall meeting in St. Cloud that those Minnesotans not comfortable with the arrival of Syrian refugees and the state’s expanding Somali population “should find a new state” because Minnesota’s economy “cannot expand based on white, B+, native-born citizens. We don’t have enough.”

The PowerLine’s Scott Johnson posted a blog on the Lake Calhoun incident titled “Minnesota men at play,” in which he mused:

“This has become a familiar story out of Europe, but it is something new under the sun in Minneapolis. Although it is big news, I can’t find any evidence of the story in the Star Tribune (please let me know if I missed it) – another element that gives the story a European dimension.”

Congress squawked over President Obama’s Syrian refugee plans and said nothing about the Somali program that has been going on for 30-plus years. House Speaker Paul Ryan ended up negotiating a deal that fully funded all of Obama’s refugee plans, including those from Syria, Afghanistan, Iraq, Somalia, Bosnia, Uzbekistan, Burma and other jihadist hotspots.

Refugee watchdog Ann Corcoran said the vast majority of Americans have no clue what is going on with refugees until they start arriving in their communities. And even then, the quality of local news reporting is often focused on flowery feature stories about refugees getting a new start after escaping war in their homeland. The underlying costs, in terms of the tax burden and risks to public safety, never make into local news reports.

“I guess we should be grateful that at least the broadcast version of the KSTP story used the ‘S’ word,” said Corcoran, author of the blog  Refugee Resettlement Watch.

“This should be on the national news,” Corcoran wrote. “Just envision this happening in your neighborhood. How are Americans ever going to be prepared and proactive if we don’t even know what is happening in the next city, let alone the next state?”

Corcoran says it’s important to remember the Somalis didn’t just “make their way” to Minnesota. They have been permanently resettled there for three decades by the U.S. State Department and three major contractors – Catholic Charities, Lutheran Immigration and Refugee Service and World Relief. (Additional contractors have moved in since.)

“The ‘youths’ harassing homeowners at Lake Calhoun were born here or came as very small children,” she said.