The British supermarket chain Tesco is getting heat for a Christmas ad featuring hijabbed Muslimas, and Muslim “reformer” Maajid Nawaz is enraged – not at Tesco, but at those who are complaining about the ad.

Says LBC: “The supermarket has responded to an outpouring of racist abuse after featuring a Muslim family in a Christmas advert.”

And Nawaz adds: “Your real agenda here is you just want a white, nativist, non-Muslim Britain.”

Once again: Islam is not a race. There are Muslims of all races.

Objecting to Muslims being featured in a Christmas ad is not due to “racism.”

It stems from Tesco’s obvious agenda in putting Muslims in the ad in the first place: to remind non-Muslims in Britain that Muslims are present in Britain, and are there to stay, and only racist, bigoted “Islamophobes” would have any objection.

It’s propaganda and manipulation disguised as an ad for turkey.

Nawaz, meanwhile, blasts those who are unhappy about the ad: “The only conclusion I can come to is that this is driven, and fuelled, by a rising anti-Muslim sentiment that wants no Muslim presence in this country and will take any opportunity to decry and bemoan a semblance of a Muslim presence in this country. Your real agenda here is you just want a white, nativist, non-Muslim Britain. You want to hark back to that nostalgic sense you have of a country before immigration. That’s the only conclusion I can come to because you’re not happy either way. If Muslims refuse to integrate you complain. If Muslims integrate you complain. That tells me there’s an axe to grind and you’re grinding it.”

The only conclusion you can come to? Really? What a failure of imagination, Nawaz!

Here is another conclusion you can come to: non-Muslims in Britain are concerned about jihad terror and the repeated boasts from Islamic jihadists that Britain will before too long become a Sharia state.

They don’t see anyone in the British government or establishment media addressing those concerns adequately: no one is challenging Muslims to work for reform, no one is questioning what is being taught in mosques, no one is opposing the establishment of Sharia enclaves.

Instead, tens of thousands of British girls have been sacrificed to Muslim rape gangs operating in accord with Qur’anic teaching, because British officials were too afraid of being called “racist” and “Islamophobic” to prosecute them.

Jihad preachers speak freely in mosques all over the country, often coming from other countries and having no trouble getting into Britain, because barring them would also be “Islamophobic.”

And while all this is going on, you tell us that Tesco featuring Muslims in a Christmas ad is a sign of “integration,” and that we’re racist for opposing it.

In reality, every Muslim in Britain could celebrate Christmas, and it wouldn’t be a sign of integration.

Why not? Because it’s off the point.

When Muslims sincerely renounce and work against jihad terror, and all the aspects of Sharia that conflict with British law (the denial of the freedom of speech, the denial of the freedom of conscience, the institutionalized discrimination against women and non-Muslims, the death penalty for homosexuals, the stoning for adultery, the amputation of the hand for theft, and all the rest), then they are integrating?

Because even though the celebration of Christmas is often denounced by Muslim clerics, it doesn’t touch upon the aspects of Islam that make non-Muslims concerned, and is not necessarily an indication that Muslims have renounced those aspects of Islam.

There are unfortunately numerous examples of Muslims who lived in close proximity to non-Muslims and were quite friendly to them, until it came time for jihad. 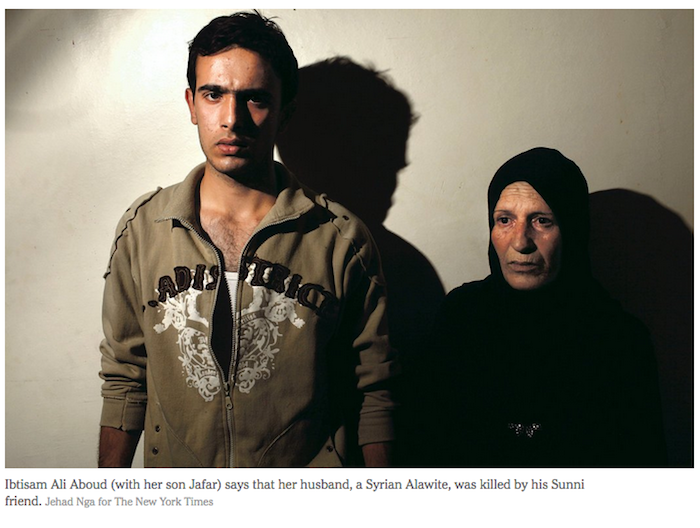 The above photo and caption are from the June 19, 2013 New York Times.

It illustrates how the call to jihad can override all existing loyalties — such that a Syrian Alawite can suddenly be murdered by his Sunni friend.

There are innumerable other examples, such as Tamerlan Tsarnaev’s 9/11/11 throat-slitting murder of his Jewish “best friend.”

An anecdote from the Ottoman Empire in the late nineteenth century:

Then one night, my husband came home and told me that the padisha had sent word that we were to kill all the Christians in our village, and that we would have to kill our neighbours.

I was very angry, and told him that I did not care who gave such orders, they were wrong.

These neighbours had always been kind to us, and if he dared to kill them Allah would pay us out.

So yeah, Maajid, you can call me racist all you want, but I don’t find it a wonderful reassurance that Tesco shows us Muslims celebrating Christmas.

What are you doing to facilitate that, or is all your energy taken up with smearing and defaming foes of jihad terror and endorsing Muslim Brotherhood politicians?

Phyllis Schlafly: Same-Sex “Marriage” Goal is to “Wipe Out the Christian Religion”

Phyllis Schlafly: Same-Sex “Marriage” Goal is to “Wipe Out the Christian Religion”