Bangladesh is awash in the blood of free thinkers, poets, secularists and non-Muslims. The slaughter is daily now.  Devout Muslims tried to kill us here in America for perceived insults to Muhammad.

This is life in a Muslim country under Islamic law (sharia). Just a whisper that you offended or criticized Muhammad and you are marked for death. It’s just that simple. The world is looking away just as it did during the rise of the Third Reich. Deaf, dumb, blind is the world to the extermination of the millions in jihad wars. There is no excuse now. Echoing Dr. Ernst Janning from ‘Judgment at Nuremberg’, no one can pretend not to know. There are websites – mine, Jihad Watch, The Religion of Peace et al. “We didn’t know” won’t fly. The world was guilty then and the world is guilty now. The world said take Sudetenland. Take the Rhineland, Take Austria. Take Czechoslovakia. And now, the world says, take Syria. Take Gaza, Take, Judea, Samaria, Lebanon, Ivory Coast, Libya …….

The world says, Islam is peace. The world says, it’s not millions of victims, it’s hundreds. That’s a blatant lie but what difference does that make? We stand for justice, truth, and the value of a single human.

What will you tell your children and grandchildren when they ask you, “Where were you?” 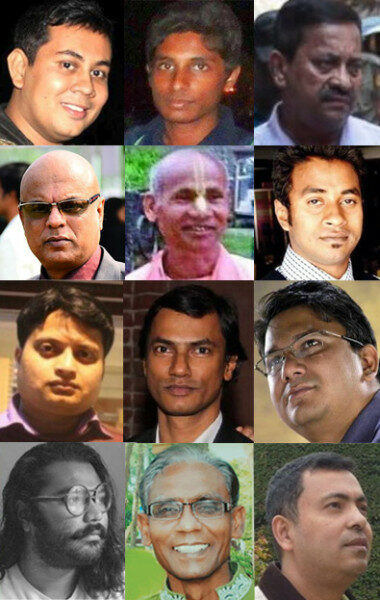 Hacked to death by Religion of Peace activists in the last two years (thanks to TROP):

A Hindu man was hacked to death in central Bangladesh on Saturday, police said, following a spate of similar attacks in the Muslim—majority South Asian nation.

Authorities are investigating whether the killing of Nikhil Joarder was connected to a 2012 complaint against him for alleged comments he made against Prophet Muhammad, said Aslam Khan, a police officer in the district of Tangail, where the attack took place.

Joarder was attacked with sharp weapons by two men on motorcycles as he sat in his tailor shop, Mr. Khan said.

There was no immediate claim of responsibility for the attack.

Joarder spent two weeks in prison in 2012 and was released after the complaint against him was withdrawn.

The attack on him was similar to recent killings of atheist bloggers, academics, religious minorities and most recently a gay rights activist in Bangladesh by radical Islamists.

Five people have already been killed in such attacks this year and nine were killed last year. While there have been some arrests mostly of low-level operatives there have been no prosecutions so far and authorities have struggled to make any headway in naming those planning the attacks.

For the 2013 killing of an atheist blogger, a court has sentenced two men to death and six others to time in prison.

Nearly all the attacks have been claimed by international Islamist extremist groups, including the Islamic State group and various affiliates of al-Qaida. The government, however, has refused to accept that these groups have a presence in Bangladesh, and has blamed the violence on its political opposition.

Minnesota: School Teacher And His ‘Husband’ Rape And Molest Underage Students – Kill Each Other in Murder/Suicide

Minnesota: School Teacher And His ‘Husband’ Rape And Molest Underage Students - Kill Each Other in Murder/Suicide