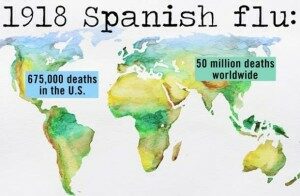 A scientist recreates deadly virus for what purpose? As if it’s not bad enough that the Ebola Scare that my co-host, David R, and I spoke of on the most recent episode of TRUTH TRENDS is growing, but now we’re hearing some other things that are sure to add to the displeasure of many of us. Yet, for those who don’t believe that there is an evil cabal of very rich (and therefore powerful) individuals doing everything they can to control the course and direction of this world toward a one-world system of government, this additional news will have no effect. That’s certainly up to them. For me? It concerns me…greatly.

Ever heard of a scientist by the name of Yoshihiro Kawaoka? He’s interesting. Apparently, he has succeeded in creating a deadly virus that is capable of making the human defense system completely useless. If that’s true, then I’m sure the globalists are dancing their heels off now, swilling the most expensive champagne they can get their hands on. They are on their way to decimating the population of the earth from its current 7 billion plus down to 500 million or less. With a guy like Kawaoka, it’s good for them to have him around…at least until they don’t need him anymore.

A scientist who carried out research on making influenza viruses more infectious has deliberately created a potentially lethal strain of flu that can evade the human immune system.

Isn’t that swell? One can only wonder why he felt the need to start manipulating things as he did. A scientist recreates deadly virus?  The article goes onto say, “Yoshihiro Kawaoka of the University of Wisconsin-Madison has genetically manipulated the 2009 strain of pandemic flu in order for it to ‘escape’ the control of the immune system’s neutralising (sic) antibodies, effectively making the human population defenceless (sic) against its reemergence.”

Why would anyone do that? There is only one purpose (besides being able to say “I did that!”), and that is to decimate the human population on the earth. There is no other reason of which I am aware. I guess Kawaoka was attempting to see if he could convert the 2009 flu virus into something more hardcore by taking the virus back to its pre-pandemic state. Apparently, he was successful.

The study is not published, however some scientists who are aware of it are deeply concerned that Dr Kawaoka was allowed to deliberately remove the only defence (sic) against a strain of flu virus that has already demonstrated its ability to create a deadly pandemic that killed as many as 500,000 people in the first year of its emergence.

The flu virus is said to have killed 500,000 during the time it emerged into society. Do you recall any type of flu scare or talk of being taking to camps or quarantining people then? I don’t either. But now that Ebola is here, things have changed apparently.

Allegedly, this same Yoshihiro Kawaoka has also attempted to recreate the Spanish flu from which millions died. I wonder if he has a dead person composed of body parts from various deceased individuals in his lab? The guy is like the worst serial killer nightmare waiting to happen.

As long as we’re talking about deadly viruses, let’s bring things up to date on Ebola. Apparently, a drug company with a felony record has the task of creating the vaccine for Ebola. Isn’t that exciting? I mean, if I knew my doctors or dentists had felonies, gosh, that wouldn’t be a problem, would it? Actually, yes it would.

But as far as our government is concerned, it’s not a problem and the company – GlaxoSmithKline – continues to do business as though they never plead guilty to fraud and were ordered to pay $3 billion in fines. Get this – they admitted bribing doctors to push dangerous drugs to their patients in exchange for “Madonna tickets, Hawaiian holidays, cash and lucrative speaking tours. They also admitted distributing misleading information regarding the antidepressant Paxil. The report claimed that it was suitable for children, but failed to acknowledge data from studies proving its ineffectiveness in children and adolescents.”

Obviously, for this company, it’s all about the Almighty dollar and they stand to make plenty off the new Ebola vaccine they are now creating. Yet, we are to trust this company to make a vaccine that is to be used to treat people with a preventative so that they will not become infected with Ebola. Can I see a show of hands, please, of those who would put their faith and trust in such a company? Anyone? No?

We have problems in this country. The left likes to say the problem stems from capitalism. No, that’s not the problem. The problem is the greed that grows in the human heart. Capitalism is amoral. He has the potential to be good but it can also be used for bad. It depends on the individuals associated with it.

We’ve got to be vigilant. We’ve got to do our research. We’ve got to do what’s best for ourselves and our loved ones. If you can trust a company like GlaxoSmithKline to create a vaccine that is allegedly going to keep you from picking up the Ebola virus, then you’re probably a few brain cells short of a real brain.

The information is out there. It has become obvious what the globalists want to do to the rest of us. If they can’t kill us, they’ll enslave us, then kill those they don’t want around any longer.

You can appreciate the growing tone of the situation, or you can quietly get on the train, not know where you’re going (but trust those who are telling you it’s a good thing), and then learn too late that your destination is ultimately your death.