Nelson Mandela: Media Fawns Though He was a Marxist Terrorist

I got a little nauseated tonight after I learned of the passing of Nelson Mandela. Some of the sources that I would expect to give that “fair and balanced” reporting they promise, definitely failed in that regard. That is my opinion. Check out these headlines:

I could go on with this list. The question is, are people are buying it? Unfortunately, I think most probably are. 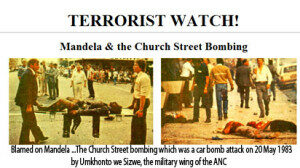 I received an email yesterday from an overseas friend who has some expertise on this subject matter:

Mandela has finally been proclaimed dead.  The world – including your President are now gushing about what a wonderful man he was.

He was not. Obama could take lessons on how to live a lie and keep people fooled! Obama says he studied Mandela – I can believe it.

I wrote this article in June:
http://www.allvoices.com/

It’s an excellent article. I was already busy gathering facts and sources when I received her email.

Now let’s get this out of the way because I am sure I will receive the typical response from the uninformed who will call me a racist rather than arguing the facts, which they usually seem to know nothing about.

Nelson Mandela was very instrumental in the defeat of apartheid, and apartheid is, and was, a crime against humanity. It is his methods I question, and his methods that the world tends to conveniently overlook.

Are you aware that Nelson Mandela could not enter the United States without a special waiver until 2008? Up until that time, he was on a terrorist watch list.

Nelson Mandela and the African National Congress were on a U.S. terror watch list until President George W. Bush signed a bill removing them in 2008.

How can the man that is most credited with the end of apartheid be on a terrorist watch list in the U.S.? Well, you are about to hear the rest of the story.

Ronald Reagan was instrumental in the classification of Mandela’s ANC (African National Congress) as a terrorist group. He cited the ANC as one of the world’s “most notorious terrorist groups.” Now let’s pause there for just a moment. I want you to ask yourself whose judgment you would trust if given the choice. Would you trust George W. Bush or Ronald Reagan on correctly assessing the character of this man?

The argument is that Mandela was a different man in 1988 than he was in 2008, but I think we need to look hard at the facts and see that, in South Africa, there are people very much on edge even today.

I want you to understand why Ronald Reagan and Margaret Thatcher were outspoken against the African National Congress. Were they racists? Not at all.

There was a revolution going on in South Africa, and it was not blacks killing whites (that would come later). It was the ANC killing anyone who opposed them or anyone who was in the wrong place at the wrong time, including over 20,000 blacks. Here is a video that you might find interesting.

The thought of some is that Nelson Mandela was orchestrating these planned attacks from prison. Either way, you can not dispute that it was his organization that was responsible. If he didn’t want to be associated with such violence then he could have renounced the ANC and its violent tactics.

Here is a short list of the ANC bombings from CSBR:

SA exile Henri le Riche writes: “Other than the ANC siding with the communists during the Cold War, why did UK prime minister Margaret Thatcher and US president Ronald Reagan call the ANC a terrorist organisation? I will let the current US president, Barrack Obama, answer that question. After the April 16 2013 bombing at the Boston Marathon, he said: “Any Time Bombs Are Used to Target CIVILIANS It Is an Act of Terror.”

The ANC had an easy choice: Fight soldiers, or take the easy cowardly option terrorists worldwide take,and that is target civilians..

In 1985, Mandela received an offer for his freedom. All he had to do was renounce the violence and help end the bloodshed.

On 31 January 1985, State President P W Botha offers Nelson Mandela, leader of the banned African National Congress (ANC), conditional release from the prison sentence he had been serving since the conclusion of the Rivonia Trial in 1964. The condition of his release is that he renounces violence, and violent protest, as a means to bring about change in South Africa.

Does that sound like a “man of peace” to you? Whether the violence was justified or not is a matter of opinion, but I think it is fair to say that Mandela was never the Ghandi-like man that he was portrayed to be in American mainstream media.

What people need to understand is that the violence in South Africa did not end when Mandela was released, and it did not end with the death of apartheid. In fact, it may have grown worse.

Despite the end of apartheid, the racial division of a leader who claimed to be about peace has caused black on white crime and genocide to explode.

In July of 2012, Dr. Gregory Stanton, head of the nonprofit group Genocide Watch, conducted a fact-finding mission in South Africa. He concluded that there is a coordinated campaign of genocide being conducted against white farmers, known as Boers. “The farm murders, we have become convinced, are not accidental,” Stanton contended. “It was very clear that the massacres were not common crimes,” he added — especially because of the absolute barbarity used against the victims. “We don’t know exactly who is planning them yet, but what we are calling for is an international investigation,” he added.

It seems like the black population of South Africa finally decided to take out generations of built up hostilities on the white people who once ruled them. But this is not the ruling class they are killing. These are civilians. Notice a theme here?

So what did Mandela have to do with the killing of white farmers?

Like any world leader, he was so well insulated that even if he was ordering these killings you would likely never prove it. And since the ANC has now gained a sense of legitimacy they would be careful to cover their tracks as well. So how can I logically relate Mandela to this senseless violence?

Mandela wass a race baiter. He wass very much like Barack Obama, Jesse Jackson and Al Sharpton. He has been about inciting people to violence on the basis of skin color. The thing is that he was far less subtle than the black-on-white race baiters in America. In this YouTube video he sings about killing whites:

So where does all of this leave us?

Should I have simply kept my mouth shut and reported upon the passing of this world leader?

Folks, that would be wrong because the legacy of Mandela is not dead yet, and there are white South Africans heading for cover as we speak. Let’s revisit an RT article from October:

A section of the white population in South Africa is preparing for the worst scenario in case aging former South African President Nelson Mandela passes away. The national evacuation plan over possible genocide was drafted almost a decade ago.

Since Mandela’s was elected South Africa’s first black president in 1994 after spending 27 years in prison for actively opposing the segregationist policies of apartheid in the country, Afrikaners say over 3,000 white farmers have been murdered in revenge for the suppression enforced by its own National Party. Afrikaners say the government has never shown much desire to investigate the deaths.

And now as Mandela is in and out of hospital at age 95, Afrikaners and their supporters are preparing for the worst upon his death.

Genocide Watch, an organization that analyzes conditions around the world that could result in mass murder, puts Afrikaners’ risk of slaughter at level six or “preparation” stages, one level away from killings.

Gustav Muller and his team preparing for the worst are afraid level seven could start any moment. A former intelligence officer in the South African army, he says it was simple to read the warning signs.

Muller, a leader of the Suidlanders movement, has helped establish a countrywide operation with more than a hundred safe areas.

When the alert is given, people across the country will be notified by SMS, and they will go to a pre-arranged meeting point from where they will travel by convoy to the safe areas.

“The death of Nelson Mandela is a risk scenario,” Muller said. “He is a political icon and his passing could see violence flaring up again.”

You don’t just stay on a terrorist watch list for 20 years for no reason my friends. Republican and Democratic administrations alike had a chance to take him off of that list. But it wasn’t until he was 90 years old that George W. Bush signed his release.

Or you can go read about how great he was if you would like. It doesn’t matter to me. I am after the truth.

I don’t care if he was white, black, yellow, green or purple. The man was about hate, and he was very dangerous and divisive.

Nelson Mandela was a Marxist and a terrorist, who drove people to kill on the basis of skin color. After his death, they will likely continue to reign terror upon their countrymen and that is what he leaves behind.

That is the truth.