For a brief review of why there is so much interest in Seth Rich’s death, recall the news from August of 2016. At first glance, upon learning of Seth Rich’s death,“conspiracy theorists” couldn’t help but notice the rather obvious absurdity of how police labeled his murder a botched “robbery,” when Rich hadn’t been robbed of anything. At the time Rich’s body was discovered, he still had his wallet, money, watch, cell phone, etc. He was, however, beaten, and then shot in the back, neither of which is consistent with a typical “robbery,” and certainly not a “robbery” where nothing was taken.

In addition to the decision by police not to investigate Seth Rich’s death as murder, what really drew the attention of all the crazy “conspiracy theorists” was the fact that at the time of his murder, Rich was one of five former Clinton “associates” who had become Clinton “adversaries,” all of whom died under very mysterious circumstances over a six-week span leading up to the DNC convention. Looking at both circumstances together, it’s hard to fathom how any well-trained, logical member of law enforcement, would not find any need to investigate the potential for possible ties between the two.

When this story first broke, not only did the police see no need to investigate possible ties between the two circumstances mentioned, but when people did start asking questions, terms like “conspiracy theorist” were thrown around, and police still refused to investigate further.

Now, thanks to a team of George Washington University forensic psychology graduate students and their instructors who analyzed the case and provided their findings in a 48 page report (below), the fears of many “conspiracy theorists” appear to be even more legitimate than ever!

In the following video, Today’s Yellow Snow (formerly Right Wing News) looks at the 48 page report released by the George Washington University Team, and analyzes what portions of the report line up with the theory that links Hillary Clinton to Seth Rich’s murder, and which portions of the report MIGHT not fit.

This report, if correct, just confirms exactly what we have all been thinking. Although those who have spoken out about it, such as Hannity, have received extreme backlash from the liberal mainstream media. Perhaps because they know the truth and want to keep it buried.

This new, independent report suggests that DNC staffer Seth Rich was not killed at random or by way of a robbery….but rather murdered by a third part: a “hired killer.”

Here is a summary of an “all-volunteer group of current and former George Washington University forensic psychology graduate students and instructors” and what they found: 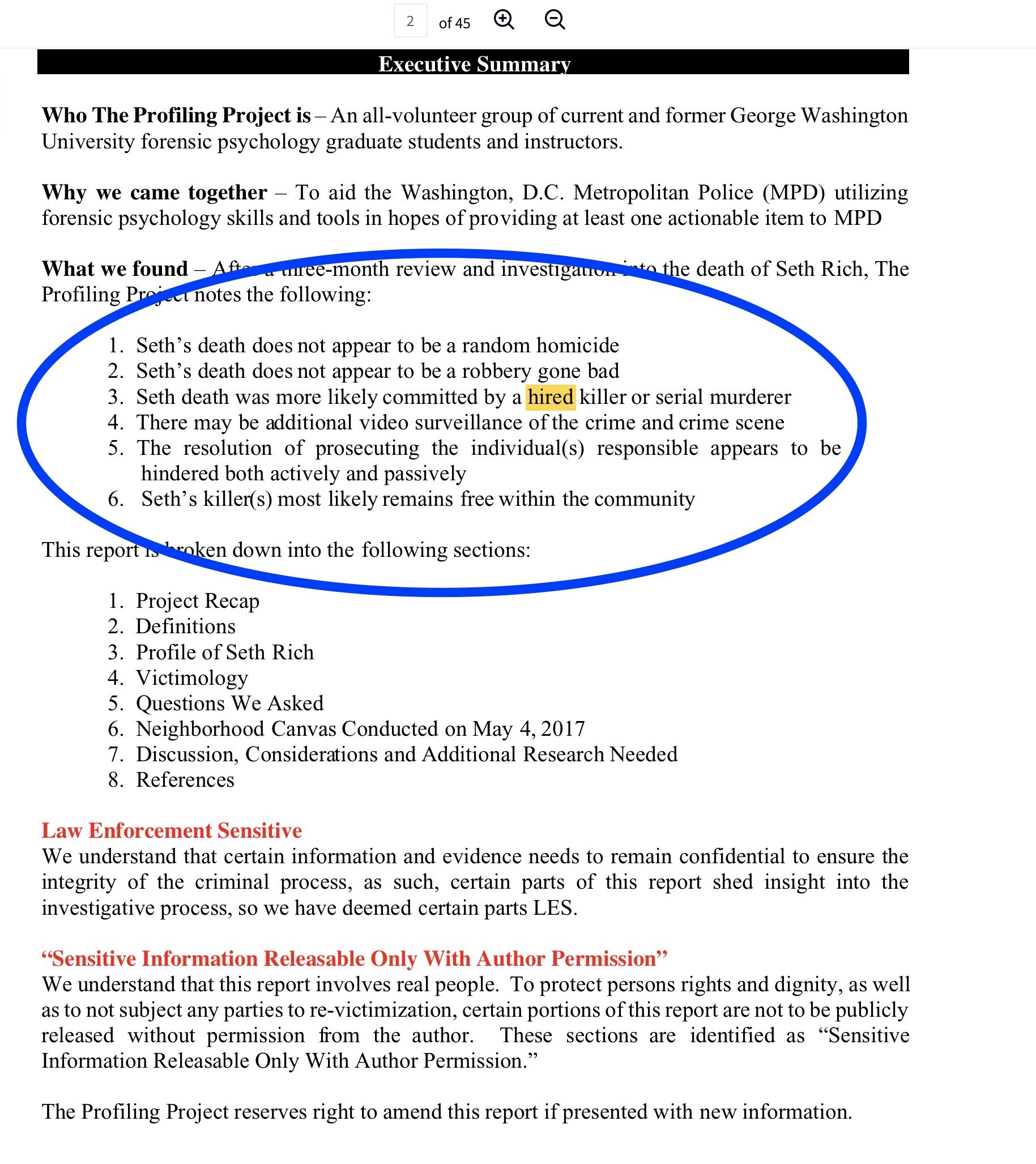 The report states that they told the family of Seth Rich before releasing the details of their findings.

On Page 10 of the report above it says:

“The decedent was conscious and breathing with apparent gunshot wound(s) to the back. The decedent was transported to local area hospital and was pronounced by attending physician at 0557 hours.”

Compare that with the testimony of a 4th-year surgery resident who was actually present the night Seth Rich was treated at the hospital, before “unexpectedly” dying. Needless to say, the surgery resident sure does have an interesting story. If this 4th-year resident’s testimony existed in a vacuum that would be one thing, however, it does not as you’ll see below, posing some very serious questions!

Furthermore, on Page 28 of the report above, it covers the theory that Seth Rich was “Killed for Leaking DNC Documents to Wiki-Leaks”

Findings – Not Likely, unless a toxin was introduced into Seth

Further Information Needed to Answer This Question – Any forgiven substance in Seth’s system could support this theory. Any poison or radiation indications would support the professional killer theory, as the killer would have known that once the matter entered the bloodstream it would take effect.

Comments – Such toxicology reports are required per the 2016 version of the DC Office of the Chief Medical Examiner Standard Operating Procedures. Section 10 Ancillary Studies, C Toxicology25 states the following:

What’s interesting about that finding, is that in addition to claims that everyone was kicked out of Rich’s room except for the attending physician, comes from a report published on June 3 at Intellihub.

Intellihub reported that mainstream D.C. Journalist, ABC 7’s Scott Taylor, was denied multiple Freedom of Information Act requests on Seth Rich, by both the District of Columbia Metropolitan Police Department AND the Chief Medical Examiner, who could have answered the question about toxicology. Hmmmmm.

Are journalists starting to get too close to the truth in the Seth Rich case?

ABC 7’s Scott Taylor was recently denied a Freedom of Information Act Request that he filed with the Government of the District of Columbia Metropolitan Police Department which requested copies of video footage captured at the crime scene by police officers body cameras and surveillance video captured from the hospital where DNC staffer Seth Rich was taken before his death.

Frustrated with the official response, the investigative journalist tweeted: 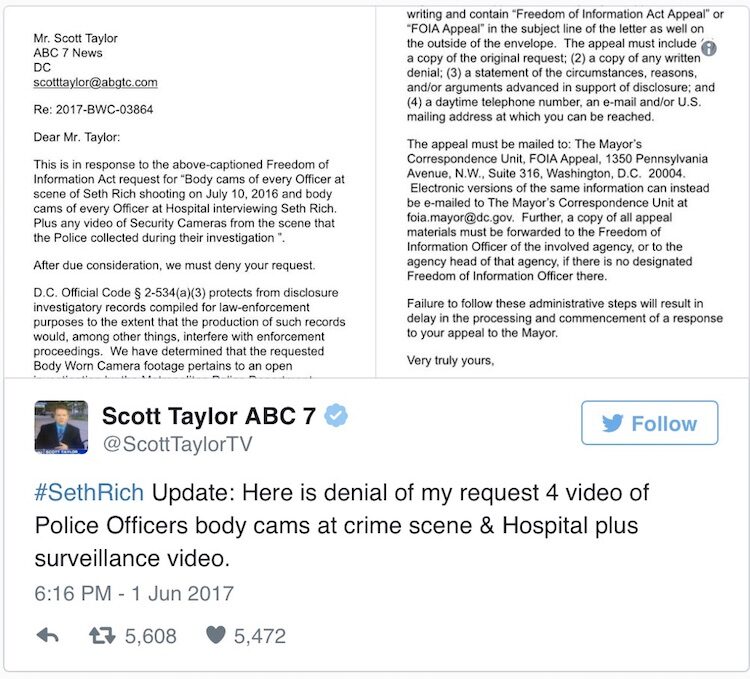 Two attachments included in the tweet read as follows: 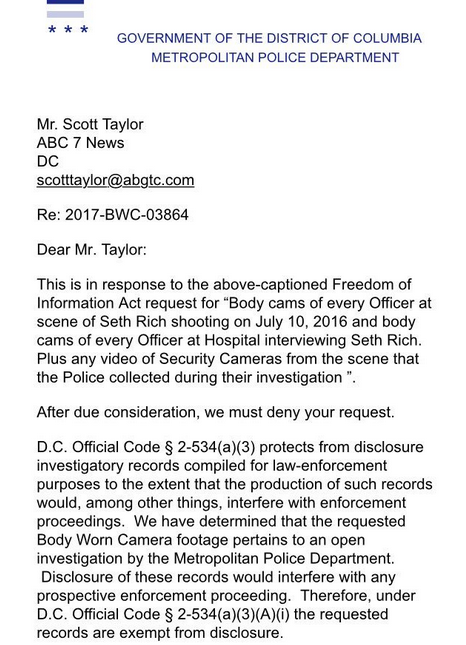 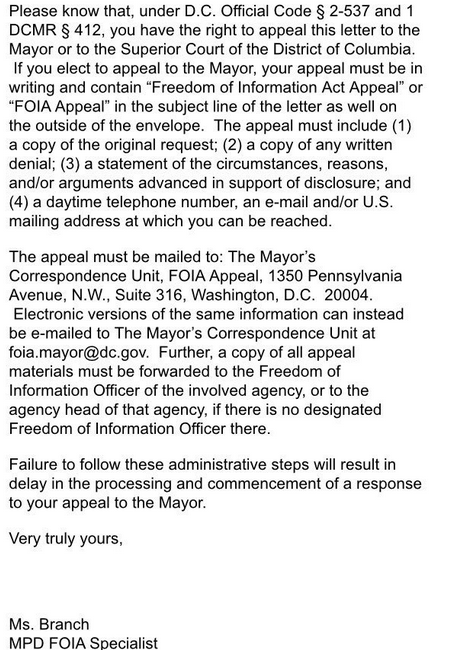 The response from DC Metro Police makes no sense, especially because body camera footage has been released by the department in the past and can only help in solving the case.

“Body cams in homicides have been released in the past in #DC.”

An additional FOIA request filed by Taylor was denied by the Chief Medical Examiner. 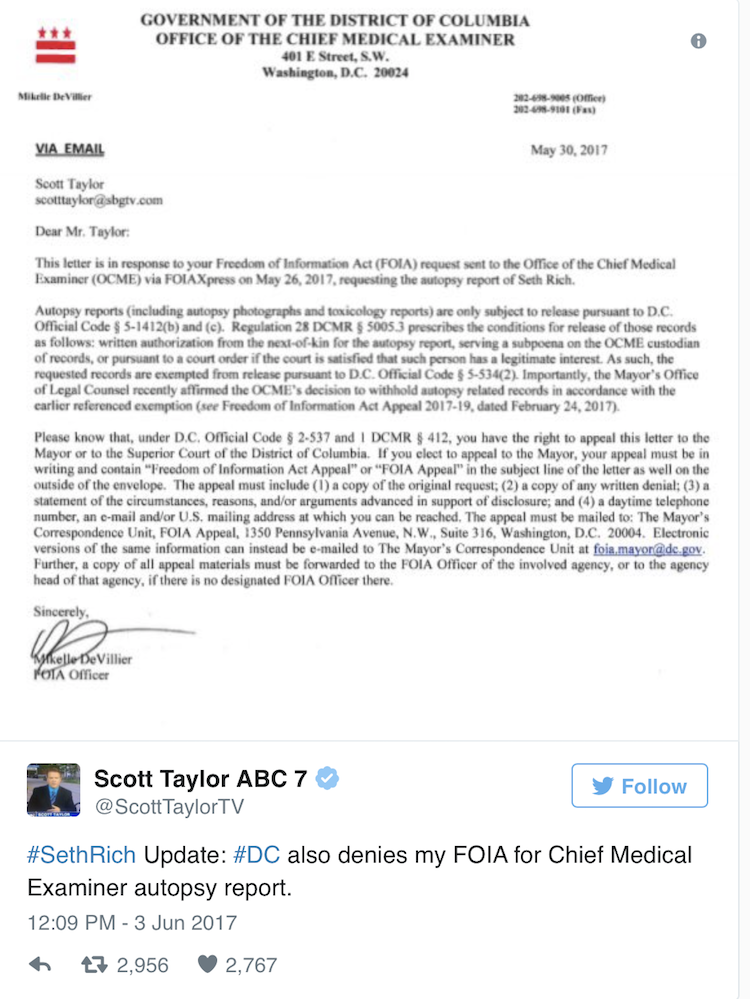 How deep does the deep state go?

In a post from June 6th titled, Toxic New Details About Seth Rich’s Murder Emerge, it was revealed that Heather Podesta, ex-sister-in-law to John Podesta (Hillary Clinton’s campaign manager), just so happened to be serving on the board of the Washington DC Police Foundation together with the Metropolitan Police Chief Cathy Lanier, who served as police chief when DNC staffer and widely-reported WikiLeaks source Seth Rich was murdered in July 2016. Lanier stepped down as police chief the next month.

People have also discovered that comments on Rich’s Reddit account have also been altered to better fit the narrative. Finally, rumors are swirling that the corporate higher-ups are ready to hand Hannity the pink slip very soon if he keeps pursuing the story. This is all just coincidence though, right? Not likely. 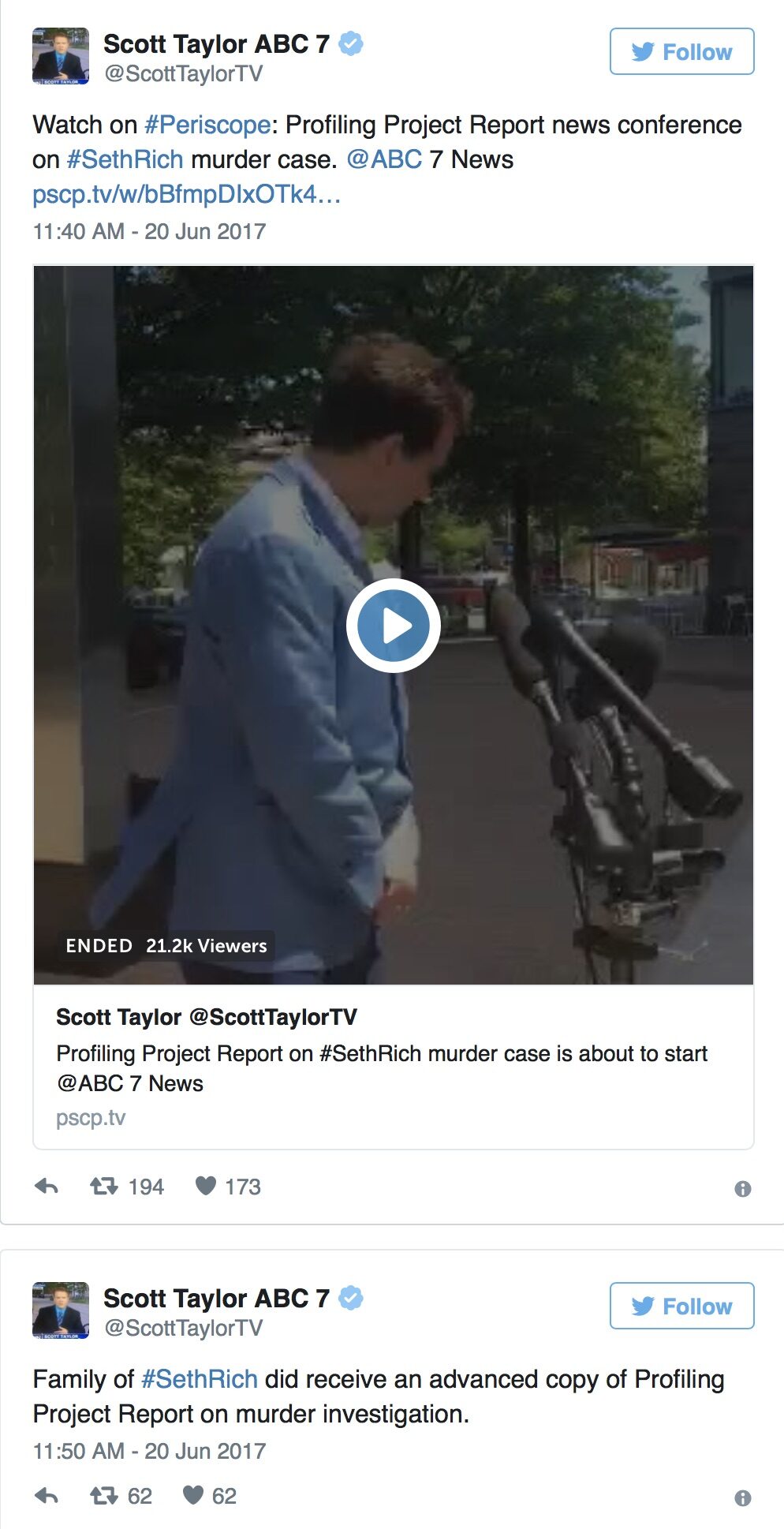 What do you think about this report? There are too many factors that do not add up in Rich’s murder. Why would someone who was robbing him, kill him and then leave all his belongings on him? Yet that is the story that the left would like you to believe. That he was simply killed in robbery-gone wrong.

Before we go locking up Hillary and throwing away the key, there is still one nagging issue: Recall that Seth did not die at the scene. If Seth Rich’s murder was a professional hit, the killer was a total amateur because he/she did accomplish their only mission prior to escaping. Considering the list of 67 mysterious deaths previously mentioned that are connected to the Clinton’s, it seems unlikely that a professional hit would have been so sloppy, unless of course… positive toxicology reports show that a toxin was introduced into Rich’s system.

Why do you suppose the Freedom of Information Act was denied? Just sayin…

School Calls Cops On 11-Year-Old After Seeing A BB Gun During Virtual Lessons, Says It's No Different Than Bringing A Gun To School

School Calls Cops On 11-Year-Old After Seeing A BB Gun During Virtual Lessons, Says It's No Different Than Bringing A Gun To School