It seems like the Federal Government has competition in the spying and back door gun registration business. Just when you thought Big Brother had a monopoly on privacy violations and tyrannical information sharing, the private sector has moved in. This can only be good for the spying and oppression industries in this country. Competition is healthy. Though some would say that the government has done a decent job of violating our rights, I happen to believe that the private sector can do it better. This is what we need. Smaller government and the ability for everyone to spy on each other while creating our own propaganda.

This is one of those stories that is so bizarre that I don’t know where to start. How would you like to see a file attached to you, through an android app that gives explicit details about your guns, your children, your mental health, etc?

This android app promises to help Americans “geolocate” dangerous gun owners. Is it not bad enough that our government is continually invading our privacy? Now we have the private sector jumping on board?

Though the intentions may be genuinely good the idea is beyond stupid. This is a total violation of privacy and conducive to loads of misinformation. I want to show you their recommended gun marking list and I will put my own comments beside the entries in bold:

It gets worse. In addition to marking addresses, users are encouraged to leave useful information. 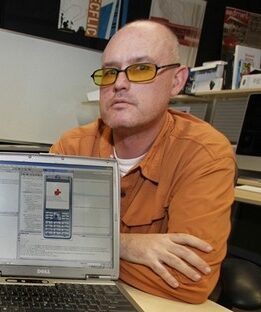 The local context of the site marking is very important to other users who might view the marker you have placed. In as few words as possible (limited to 64 characters), you can provide some extra information that would be relevant to the local community. This might be a specific street address, the names of the owners, or brief details explaining why you are reporting the site.

Thank God for the 64 character limitation. But that’s enough room to give more info than you or I would want shared.

Here is something quite interesting… Bizpacreview uncovered a little info on the creator of this Android app:

The app’s developer is Brett Stalbaum, a lecturer at the University of California, San Diego. His university biography brags that he helped develop software used to attack the Pentagon, among other things you’d have to be an academic liberal to be proud of.

Sounds to me like a modern day Bill Ayers. I have to stop and apologize now. I didn’t realize the creator was a terrorist. This changes everything. We need to get him onto the lecture circuit as soon as possible.

If anyone can find one redeeming quality with this app I would surely like to read it in the comments below. The info he is asking for needs to be reported to the cops and truly has little to no value to regular citizens. Other than making a choice about where to move after our next eviction notice I can see no benefit. It simply invades the privacy of people and sets them up as targets for criminals. Misinformation is a major concern as well. The only people who will be using this info are criminals (including the tyrannical government variety).

Yeah whatever. The bottom line is that this app could end up getting people killed if it gets widespread distribution. Anyone who hacks government computers and creates apps that might potentially get people killed is a terrorist in my book.

I sincerely hope that the app flops. If it does not then it is a series of lawsuits waiting to happen.

Regardless of what happens with the app it would appear that Brett Stalbaum’s true calling is politics. Put him with Feinstein and Pelosi and we would have quite a contingent coming from California.

I have lots of good friends that I know and love from the left coast but I don’t know why you people choose to stay there. I continue to write about one whack job after another from that state and I don’t see that trend dying any time soon.

So what do you think? Do we need this android app to save our children since congress has failed to do so?

Knowing where Adam Lanza lived certainly would have precluded him from traveling to Sandy Hook Elementary and killing those innocent children. This app might have made all of the difference.

We need androids in the hands of every American quickly. Lives are at stake. Besides, I have my own list of terrorists to add.

Sorry for ranting but the ignorance of some people is really disturbing.

Editor’s Note: I actually think if this is the game the anti-gun crowd wants to play then two can always play it. I’m hoping someone in this reading audience can develop an app to point out non-gun owners. We’ll start with Mr. Brett Stalbaum, if he indeed doesn’t own guns. If you do, let me know and we’ll spotlight that at Freedom Outpost.