Every day it’s something new. Another attack, more beatings, an unending stream of brutality that is akin to wild animals. The carnage and bloodshed is too much to take in. Late last night, an innocent group of students were attacked by vicious Nigerian Islamic militant jihadists, in an area where an Islamic uprising is in progress. But why these students? Why were they targeted? There is no reason. The only reason is Islam. There is no group that is immune to to the bloodshed. Kill the infidels. Kill everyone, and this they keep doing. 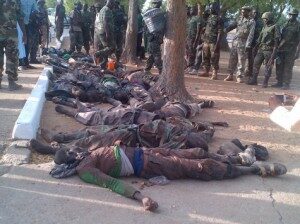 Why? Islam demands it. However, the horror of gunning down and burning sleeping college students in the dead of the night is nothing short evil and demonic. Even fictional vampires wouldn’t do this, but Islamic jihadists would, in a heartbeat, or whatever they have in place of a heart.

“They attacked our students while they were sleeping in their hostels, they opened fire at them,” he said.

The students were sleeping in their hostels. All of the students were between the ages of 18 and 22, and they are still in the process of collecting bodies. The exact death toll is not known, merely estimated. Not unlike last weeks church bombing in Pakistan, it may take time to figure out exactly how many are dead.

Naturally, that attack was much larger in scale. But the endless wave of attacks in the region shows no sign of letting up. What’s next? No one wants to contemplate what might happen next. For the next attack could be hours away. Or merely minutes.

The Nigerian military has collected 42 bodies and transported 18 injured students to Damaturu Specialist Hospital, said a military intelligence official, who insisted on anonymity because he is not authorized to speak to the press. The school’s other 1,000 enrolled students have fled the college that is about 40 kilometers (25 miles) north of the scene of similar school attacks around Damaturu town, said provost Mato.

Vicious monsters without souls. This is the enemy we are fighting, and we don’t realize it. Most schools in this region have been closed since July 6th attack that killed 29 students and a teacher, who too were burned alive in their hostels, much like the college students in this attack. But this school bravely stayed open. But there was a huge price to pay for their bravery. 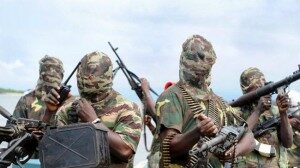 Just in the last week alone, 30 people have been murdered by jihadists in Nigeria. And not just murdered, but tortured, and brutalized in unimaginable ways.

Twenty-seven people died in separate attacks Wednesday and Thursday night on two villages of Borno state near the northeast border with Cameroon, according to the chairman of the Gamboru-Ngala local government council, Modu-Gana Bukar Sheriiff.”

The attacks in Nigeria are intensifying with every waking moment. A pastor and his son were slaughtered at a Christian church in Dorawa on Thursday. And now the attack on sleeping college students.

Nigeria is in peril, as is the entire Middle East region. Where is the outcry from U.S. government officials about the atrocities being committed by Islamists in the region? There’s only silence, and arming so-called “moderates.”

About the attack last night, “The extremists rode into the college in two double-cabin pickup all-terrain vehicles and on motorcycles, some dressed in Nigerian military camouflage uniforms, a surviving student, Ibrahim Mohammed, told the AP. Almost all those killed were Muslims, as is the college’s student body, said Adamu Usman, a survivor from Gujba who was helping the wounded at the hospital. One body had its fists clenched to the chest in a protective gesture. Another had hands clasped under the chin, as if in prayer. A third had arms raised in surrender.”

Forced surrender. What other option did the young man have when being ambushed by the jihadists, who came with one intent: to kill? Never mind who was there, or why. Slaughter them all, like a pack of dogs. Save no one.

“We ran into the bush, nobody is left in the school now,” Ibrahim Mohammed said.

There is no one left. The school is empty. Islam is overtaking the region and Jihad is sending those running for any safe place to escape.
This is Islam, and there is no escape.