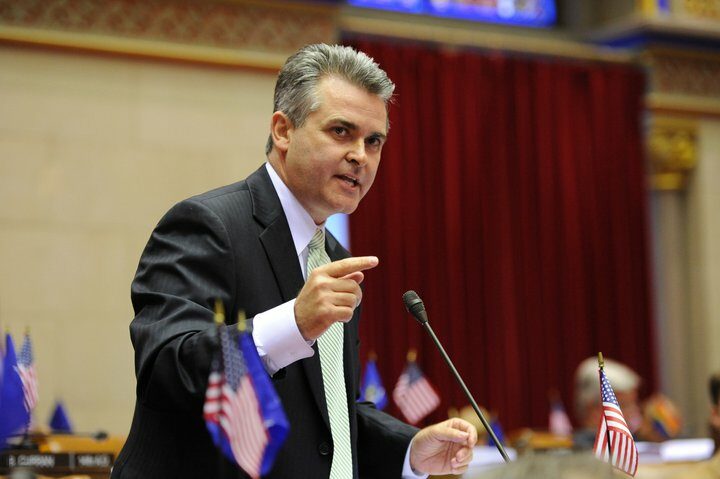 On his Facebook page, McLaughlin not only shared the video, but also the following:

Here it is. This is the video where I was asked to keep the Democrat proposals for the NY SAFE Act away from the public. This list was given to me by a colleague and it is not confidential.

This bill was an attack on the 2nd amendment and the Democrats clearly wanted to dismantle the work of the Founding Fathers. None of these amendments were included in the final bill thanks to us fighting back. I will not stand silent while these unpatriotic proposals are pathetically thrown at us a 11 o’clock at night:

1. Confiscation of “assault weapons” 2. Confiscation o ten round clips 3. Statewide database for ALL Guns 4. Continue to allow pistol permit holder’s information to be replaced to the public 5. Label semiautomatic shotguns with more than 5 rounds or pistol grips as “assault weapons” 6. Limit the number of rounds in a magazine to 5 and confiscation and forfeiture of banned magazines 7. Limit possession to no more than two (2) magazines 8. Limit purchase of guns to one gun per person per month 9. Require re-licensing of all pistol permit owners 10. Require renewal of all pistol permits every five years 11. State issued pistol permits 12. Micro-stamping of all guns in New York State 13. Require licensing of all gun ammo dealers 14. Mandatory locking of guns at home

What’s even more disturbing is how the new law that Governor Andrew Cuomo signed will effect police officers. The Daily Caller reports:

A New York lawmaker says that the state’s recently passed gun control law stunningly fails to include any exemptions for law enforcement officers, and technically prohibits police from ever bringing guns on school grounds or possessing extended ammo magazines.

The NY SAFE Act, which was championed and signed into law by Democratic Gov. Andrew Cuomo, bans all magazines that hold more than seven bullets and pre-1994 high capacity magazines, and prohibits the carrying of guns on school grounds.

But because no loophole for law enforcement was included in the law, every police officer in the state is technically in violation of the statute even though the prohibition is unlikely to be enforced, according to New York Assemblyman Al Graf.

So it seems that if police had to respond to a school shooting that many of them could not legally go to the school with a firearm that carried more than 7 bullets.

However, in a statement that should make every red blooded American scream their head off, Graf said, “It doesn’t exclude retired police officers, so all of them have to turn in guns and magazines and stuff like that. What they did is disarm the good guys and make sure the bad guys outgun them.”

Yeah, exactly, but the police are not the only good guys that were disarmed with this unlawful law that was passed.

UPDATE: Here’s what Cuomo’s “gun-free” New York actually looks like. This is what the Obama administration proposes as well people. Notice who has the gun!