While the media remains obsessed with Weiner’s sexcapades, there is actually some serious news happening around the world. Though it is not being reported in very many places, the U.S. has apparently released 5 inmates from Guantanamo Bay in order to get those peaceful negotiations with Afghanistan and The Taliban off to a roaring start. Don’t worry though. The U.S. has made all 5 released inmates promise to be good boys.

Without much publicity or official announcements, the United States released five Guantanamo Bay detainees as a nod of willingness to open peace talks in Afghanistan. After officials in Kabul expressed desire for negotiations, the Obama administration released five members of the Taliban who were detained at the US detention center.

A top US official said that the prisoners were released under the condition that they will not engage in any violent activity. While it is clear that they are guilty of crime, the benefit in releasing them—the potential withdrawal of US forces from Afghanistan by the summer of 2014—is greater than the risk. The US announced it will attempt to negotiate peace talks with the Taliban and Afghanistan government officials some months ago.

This gesture from the US government was a departure from the Obama administration’s policy of zero tolerance to negotiations with terrorists and releasing prisoners; thus, in preparation for talks with Afghan officials, the US state department redefined the Taliban as an organization that is no longer included in the US enemy list.

Releasing the detainees from Guantanamo Bay serves another purpose for President Obama: The more prisoners released from the camp, the likelier it is for Congress to approve shutting down the facility altogether—a campaign promise which Obama he has been trying to realize since first being elected in 2008.

It appears that we have absolutely no reason to worry. They have been released under the condition that they engage in no violent activity. That’s a relief. I realize that they are former terrorists but they have surely been rehabilitated. They will probably all go to work in the private sector now and be fine upstanding citizens.

And furthermore, Obama does not negotiate with terrorists. He has a zero-tolerance policy for that. Since our government no longer sees The Taliban as a terrorist group then I should not worry about that at all. They are the good guys.

I for one do want to see Guantanamo closed but it’s not for the same reasons as many. The place is basically a country club for alleged Muslim terrorists. Do some research. It is not a corrections facility as much as it is a “political correctness” facility.

Obama can claim that he doesn’t negotiate with terrorists because he doesn’t view any of the radical Islamic groups as terrorists. But let’s look at some facts:

These are just the first several things that popped into my head and I could literally list dozens more. If this story was really anything positive then the mainstream media would be all over it. Obama knows that this story will cause controversy and has purposely tried to keep it out of the media. My guess is that they have been told to ignore it. The Obama administration is trying to hide it and was hoping that no one would notice.

But honestly we already know that you negotiate with terrorists.

I am continually embarrassed by our foreign policy. Between Horseface and The Dictator we will be very lucky not to trigger World War III before we get to the 2016 elections. 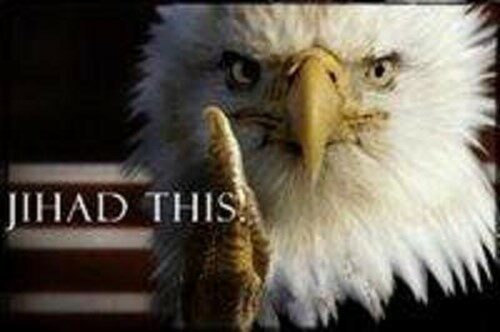 I am not someone that most Americans would want in The White House. I have anger issues. I don’t know why but when terrorists want to bring America to its knees I tend to take offense to that.

But if you want to compare my policy to Obama’s it is pretty simple. If my finger was on the button that he controls…Allah would have long run out of virgins. He’d be passing out sheep by now.

Negotiating with terrorists is a sign of weakness and the world laughs at our president while planning more jihad in America.

I happened to notice a comment on one of my blog posts today. The guy was basically calling me a drama queen and saying that I was overreacting in my article. I can’t help it. I am angry. My opinion is that someone needs to start doing a little overreacting and we need a lot less of this “let’s just see how it plays out” attitude.

This country is in trouble and you have to pick sides now. That “sit back and wait” attitude is exactly why we are at this point and it’s time to show some fight America. There is no more time for apathy. Primetime TV can wait. Your country needs you now.

Like most of my rants, this one is likely destined for internet obscurity but I can’t reach the heart of Americans by coddling them and telling them it’s OK.

Because it’s not OK.

It’s not OK to negotiate with terrorists and it’s OK to be angry about it.

If you don’t think that the Taliban is about terrorism and don’t think they are still very much our enemy you need to talk to one of our young Marines who has been fortunate enough to come home.

We have not yet begun to fight.