Amid an outcry from Americans criticizing the Obama Administration over the possibility that terrorists may be among the tens of thousands of illegal immigrants entering the United States without documentation, the Department of Homeland Security has instead turned its scrutiny on American citizens.

The Obama administration has quietly approved a substantial expansion of the terrorist watchlist system, authorizing a secret process that requires neither “concrete facts” nor “irrefutable evidence” to designate an American or foreigner as a terrorist, according to a key government document obtained by The Intercept.

The “March 2013 Watchlisting Guidance,” a 166-page document issued last year by the National Counterterrorism Center, spells out the government’s secret rules for putting individuals on its main terrorist database, as well as the no fly list and the selectee list, which triggers enhanced screening at airports and border crossings. The new guidelines allow individuals to be designated as representatives of terror organizations without any evidence they are actually connected to such organizations, and it gives a single White House official the unilateral authority to place “entire categories” of people the government is tracking onto the no fly and selectee lists. It broadens the authority of government officials to “nominate” people to the watchlists based on what is vaguely described as “fragmentary information.” 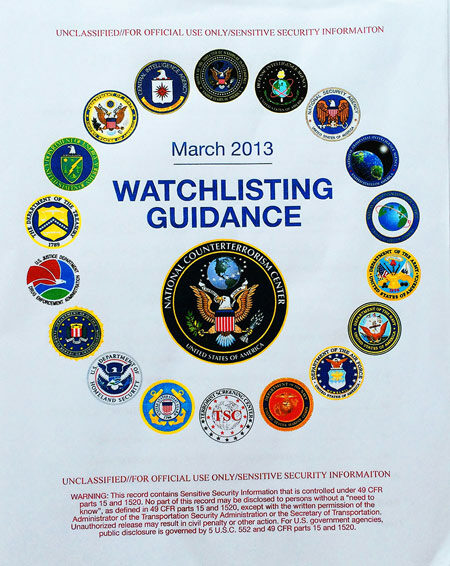 The recently declassified Watchlisting Guidance rule book issued in 2013 and developed by members of 19 law enforcement agencies that include the FBI, NSA, CIA, and NSA, outlines the rules for placing individuals, including American citizens, on the various watch lists currently in use. As noted by The Intercept, the rules, much like America’s secretive anti-terrorism laws, are vague and often contradict each other.

It reveals a confounding and convoluted system filled with exceptions to its own rules, and it relies on the elastic concept of “reasonable suspicion” as a standard for determining whether someone is a possible threat.

“Instead of a watchlist limited to actual, known terrorists, the government has built a vast system based on the unproven and flawed premise that it can predict if a person will commit a terrorist act in the future,” says Hina Shamsi, the head of the ACLU’s National Security Project. “On that dangerous theory, the government is secretly blacklisting people as suspected terrorists and giving them the impossible task of proving themselves innocent of a threat they haven’t carried out.”

The guidelines for who is or is not a terrorist are now so vague that any American could potentially be added to a list for something as menial as knowing someone who has committed an activity deemed to be of terrorist nature. And as has been highlighted previously, those activities could range from making a hand gesture that looks like a gun or manufacturing your own gold and silver coins.

The newly expanded guidelines have completely redefined terrorism, turning even innocuous crimes or suspicions of crimes into activity that is now equivalent to traditional terrorist activities such as bombings and hijackings.

The document’s definition of “terrorist” activity includes actions that fall far short of bombing or hijacking. In addition to expected crimes, such as assassination or hostage-taking, the guidelines also define destruction of government property and damaging computers used by financial institutions as activities meriting placement on a list. They also define as terrorism any act that is “dangerous” to property and intended to influence government policy through intimidation.

This combination—a broad definition of what constitutes terrorism and a low threshold for designating someone a terrorist—opens the way to ensnaring innocent people in secret government dragnets.

What’s even more mindboggling than the actual crimes and activities for which an American can now be designated a terrorist are the rules for how law enforcement agencies are supposed to place names on the watchlists.

The heart of the document revolves around the rules for placing individuals on a watchlist. “All executive departments and agencies,” the document says, are responsible for collecting and sharing information on terrorist suspects with the National Counterterrorism Center. It sets a low standard—”reasonable suspicion“—for placing names on the watchlists, and offers a multitude of vague, confusing, or contradictory instructions for gauging it. In the chapter on “Minimum Substantive Derogatory Criteria”—even the title is hard to digest—the key sentence on reasonable suspicion offers little clarity:

“To meet the REASONABLE SUSPICION standard, the NOMINATOR, based on the totality of the circumstances, must rely upon articulable intelligence or information which, taken together with rational inferences from those facts, reasonably warrants a determination that an individual is known or suspected to be or has been knowingly engaged in conduct constituting, in preparation for, in aid of, or related to TERRORISM and/or TERRORIST ACTIVITIES.”

The rulebook makes no effort to define an essential phrase in the passage—”articulable intelligence or information.” After stressing that hunches are not reasonable suspicion and that “there must be an objective factual basis” for labeling someone a terrorist, it goes on to state that no actual facts are required:

“In determining whether a REASONABLE SUSPICION exists, due weight should be given to the specific reasonable inferences that a NOMINATOR is entitled to draw from the facts in light of his/her experience and not on unfounded suspicions or hunches. Although irrefutable evidence or concrete facts are not necessary, to be reasonable, suspicion should be as clear and as fully developed as circumstances permit.”

While the guidelines nominally prohibit nominations based on unreliable information, they explicitly regard “uncorroborated” Facebook or Twitter posts as sufficient grounds for putting an individual on one of the watchlists.

According to the rule book, no actual evidence or concrete facts of wrong doing are required. In fact, according to the rules, even a single White House administration member can, for whatever reason they choose, add entire categories of people, including family members, friends and associates of suspected individuals, to a watch list.

It gives a single White House official the unilateral authority to elevate entire “categories of people” whose names appear in the larger databases onto the no fly or selected lists. This can occur, the guidelines state, when there is a “particular threat stream” indicating that a certain type of individual may commit a terrorist act.

This means that you merely knowing someone, whether in person or in a virtual space like social media networks, could lead to you being placed on a terror watchlist.

In a previous article we facetiously opined that at the rate at which terror watchlists have been expanded since 2003, the number of people on the lists will exceed the U.S. population by 2019. The new rules implemented under the watchful eye of the Obama administration suggest that such a possibility is no longer a joking matter.

Though Americans who have been added to terror watchlists are currently faced with the inconvenience of restricted travel on public transportation systems and increased government scrutiny into their personal lives, how long before government officials start rounding up suspects, or those suspected of being suspects, under anti-terrorism laws like the Patriot Act? Under those guidelines, as well as those outlined in the National Defense Authorization Act, not only can American citizens be held without charge or trial indefinitely for mere suspicion of terrorist activities, but so too can they be assassinated by drone strikes or other government action.

Adolf Hitler and Joseph Stalin couldn’t have dreamed of the power that currently resides in the hands of the U.S. government and its subordinate agencies.

“She deserves to be murdered according to Sharia”: Muslims in Pakistan enraged over new acquittal of Asia Bibi