Obama: Claims To Respect Second Amendment While Undermining It

Barack Obama just wrapped up his press conference where he introduced proposals from recommendations by Vice President Joe Biden. The executive order signed at the end of his speech was what Obama referred to as “a directive giving law enforcement, schools, mental health professionals and the public health community some of the tools they need to help reduce gun violence.” In total, Obama just signed 23 executive actions today, including a directive titled “Improving Availability of Relevant Executive Branch Records to the National Instant Criminal Background Check System.”

Four children, who wrote to the White House, flanked Barack Obama and Joe Biden as they spoke. Obama said of these children, “These are some pretty smart letters from some pretty smart young people.” I don’t know about that. Their letters seem pretty common among men in the fact that they don’t want people to die at the hands of murderers. That doesn’t take a genius. I was kind of hoping he might demonstrate whether or not they actually understood the Second Amendment or could even quote it, but that measure of “smart” didn’t occur.

Obama said, “”While reducing gun violence is a complicated challenge, protecting our children from harm shouldn’t be a divisive one.” Actually it should. It is the parents responsibility to protect their children, not government and personally I want as many semi-automatic rifles and handguns to train my children with as I can get.

What Obama fails to understand is that those of us that own weapons, the ones he said were law abiding and responsible gun owners, do so to protect ourselves, not only from criminals, but a tyrannical government. Obama mocked those who believe that measures such as the ones he signed and those he seeks to impose through Congressional legislation would set the stage for a tyrannical government and violate the Constitution. To demonstrate that the writer here is not “paranoid” when it comes to infringements made on the Second Amendment by our government, I suggest people remember the after effects of Hurricane Katrina when government confiscated guns from law abiding citizens. Take a look here and here. Do you see anyone but gun owners respecting the Second Amendment in those videos?

Barack Obama is calling for another assault weapons ban, one that will surely be introduced on January 22 by Senator Dianne Feinstein (D-CA).

He has called for a ban on “military style” weapons and magazines that can hold more than 10 rounds of ammunition. Apparently, ten is the magic number for these people. It’s completely subjective, but it makes for a good emotional argument. There has been no reason given as to why it couldn’t have been eight, twenty or twenty-nine.

He did cite a letter from Ronald Reagan in support of the “assault weapons ban” in 1994. I’ll add that Reagan even persuaded at least two Republicans in the vote on the assault weapons ban bill, which was passed 216-214. Reagan also wrote a New York Times op-ed piece in 1991, in which he called for the passage of the Brady Bill.

What’s interesting is that during Reagan’s two terms there was no significant gun control legislation passed. Also, keep in mind that his own son said that his father was experiencing Alzheimer’s while he was president and continually got worse. I think it can hardly be concluded that these actions of Reagan in the 90’s were anything like the Reagan of the early and mid 80’s.

I deal with the issue of Reagan because we are not ruled by Ronald Reagan or his legacy. We are ruled by the Constitution in this land. This is why it is important to not make idols of men and to call them out when they stray, even when they are wearing your team’s jersey.

In fact, he is utterly opposed to it. He claims that he doesn’t want to infringe on the rights of law abiding gun owners, those that he says “hunt” and are involved in “sports shooting” and “collecting.” Not once does he mention the fact that the Second Amendment doesn’t include any of those things. The Second Amendment is about a militia. Pardon me, but I’m a little worked up over this… The Second Amendment ain’t about hunting. It ain’t about sports shooting and it certainly ain’t about collecting. It’s about defending through militia for the security of a free state! Yes, I know it’s not good English, but frankly this is ridiculous that a man in the highest office in the land isn’t held to account by anyone in that room of people that listened to him blather.

Obama continued to reference that the people must demand these things and provide “common sense” legislation. First, we are not a democracy, so mob rule doesn’t apply here. The people don’t get everything they want. If they did we wouldn’t have Obamacare and we would be getting taxed less this year, not more. Second, if he really doesn’t like the Second Amendment, and I’ve just shown he has absolutely no respect for it, then the Founders gave a way to amend the Constitution, but there is no way that will be taking place and he knows it. So he seeks to undermine the Second Amendment with a purely emotional argument, not a Constitutional one. 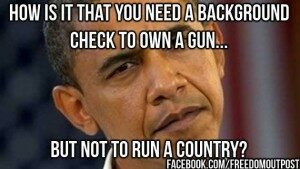 Obama also said that he wanted to see universal background checks conducted. The Federal government should have no say on transactions that take place within a state between state residents. There is no constitutional authority that I’m aware of that allows for the federal government to deal with commerce that simply occurs within the state. If a state wants to legislate that, that is part of what the Tenth Amendment is for. However, in a private transaction where I sell a firearm to another individual in my state, the federal government should have no say in that matter. After all, responsible gun owners are not going to be selling to people that they shouldn’t in the first place. Obama acknowledges this while the other side of his mouth denies it.

He also spoke about studying violent video games and proposing to ask for $10 million for the Centers for Disease Control and Prevention to study the root causes of gun violence. I can save them that money. Jesus said that if you hate your brother in your heart without cause, you have committed murder. Hatred in the human heart is the cause of murder. No one commits murder out of love. By the way, no mention was made of banning violent video games, movies or anything of the sort, only that our tax money would be spent on a study.

He also claimed the rights of victims at Sandy Hook, Virginia Tech, and Aurora were violated by the shooters. No my friends, their rights were not violated by the shooters. The victims’ Second Amendment rights were violated by the Federal government in 1990 under President George H. W. Bush with the Gun-Free School Zones Act of 1990. That’s right, the Federal government violated the rights of students and teachers to keep and bear arms on school property. The blood of those victims is on their hands of the legislators that passed that law and on those who continue to support it.

As for the Aurora shooting, clearly it was the theater that posted “No Weapons allowed” signs. While I agree that the theater has the right to determine things like that and that they were not violating anyone’s rights, they are definitely culpable in the tragedy that took place there, in my opinion, by not providing adequate security. As such, I think it is well within the families and victims who possessed a concealed carry permit who were not allowed to carry into the theater to seek damages from the theater for what happened to them.

“I intend to use whatever weight this office holds to make them a reality,” Obama said regarding the “changes” he put forth. “The most important changes we can make will depend on Congressional action.” So just what power did he flex? He signed 23 executive actions that were based on Biden’s proposals. One of those proposals will be that doctors are to report anyone they feel shouldn’t have a gun.

The suggestions put forth by Biden to Obama are said to cost tax payers $4.5 billion.

•“$14 million to help train 14,000 more police officers and other public and private personnel to respond to active shooter situations.”

•“$10 million for the Centers for Disease Control to conduct further research, including investigating the relationship between video games, media images, and violence.”

•$150 million to “put up to 1,000 new school resource officers and school counselors on the job.”

My fellow Americans, I ask you, since this administration kills American citizens in drone strikes all over the world and since they kill hundreds of innocent little children all over the world and support the murder of thousands of unborn children everyday and watch, knowing that firearms are being trafficked over our borders into Mexico during Operation Fast and Furious, resulting in the deaths of hundreds of Mexicans and at least two federal agents, is it safe to say that there is just a bit of hypocrisy in this administration? I thought so.

UPDATE: Meanwhile, as I finished writing this, the National Rifle Association released a video, via their press office, promoting their big government solution of placing police officers at every school. Obviously it’s well produced. I’m just wondering why the call was not made for the Federal government to stop infringing on the Second Amendment rights of teachers and school officials.

Psychologist Concerned About Mental Stability of President: Obama May Not Be “Sane”

Psychologist Concerned About Mental Stability of President: Obama May Not Be “Sane”