“The condition that an operational leader present an ‘imminent’ threat of violent attack against the United States does not require the United States to have clear evidence that a specific attack on U.S. persons and interests will take place in the immediate future,” reads a confidential Justice Department memo defending the U.S. government’s ability to order the killing of American citizens if they believe them to be “senior operational leaders” or “an associated force,” even if they don’t have any evidence that the person targeted is actually engaged in or plotting an attack on the U.S. 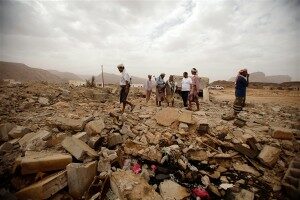 Tribesmen this week examine the rubble of a building in southeastern Yemen where American teenager Abdulrahmen al-Awlaki and six suspected al-Qaida militants were killed in a U.S. drone strike on Oct. 14, 2011. Al-Awlaki, 16, was the son of Anwar al-Awlaki, who died in a similar strike two weeks earlier.

All of the controversy stemmed from the September 2011 drone strike in Yemen that killed alleged al-Qaida operatives Anwar al-Awlaki and Samir Khan. Both were U.S. citizens who had never been indicted by the U.S. government nor charged with any crimes.

The “kill list” was affirmed last year as then Obama’s assassination czar, John Brennan, was appointed. Now that same Brennan, who was a key architect in the drone campaign, has now been appointed by Obama as the new head of the Central Intelligence Agency (CIA), following David Petraeus’ resignation.

The memo states that “no clear evidence of a specific attack on persons and interests” is needed, nor does the “operational leader present an ‘imminent’ threat of violent attack against the United States” in order to be targeted for assassination by the Federal government.

Michael Isikoff points out the following:

As in Holder’s speech, the confidential memo lays out a three-part test that would make targeted killings of American lawful: In addition to the suspect being an imminent threat, capture of the target must be “infeasible, and the strike must be conducted according to “law of war principles.” But the memo elaborates on some of these factors in ways that go beyond what the attorney general said publicly. For example, it states that U.S. officials may consider whether an attempted capture of a suspect would pose an “undue risk” to U.S. personnel involved in such an operation. If so, U.S. officials could determine that the capture operation of the targeted American would not be feasible, making it lawful for the U.S. government to order a killing instead, the memo concludes.

The undated memo is entitled “Lawfulness of a Lethal Operation Directed Against a U.S. Citizen who is a Senior Operational Leader of Al Qa’ida or An Associated Force.” It was provided to members of the Senate Intelligence and Judiciary committees in June by administration officials on the condition that it be kept confidential and not discussed publicly.

Although not an official legal memo, the white paper was represented by administration officials as a policy document that closely mirrors the arguments of classified memos on targeted killings by the Justice Department’s Office of Legal Counsel, which provides authoritative legal advice to the president and all executive branch agencies. The administration has refused to turn over to Congress or release those memos publicly — or even publicly confirm their existence. A source with access to the white paper, which is not classified, provided a copy to NBC News.

Jameel Jaffer, deputy legal director of the American Civil Liberties Union (ACLU), in an interview with NBC said the document was “chilling.”

“Basically, it argues that the government has the right to carry out the extrajudicial killing of an American citizen. … It recognizes some limits on the authority it sets out, but the limits are elastic and vaguely defined, and it’s easy to see how they could be manipulated,” Jaffer said.

Justin Sink recalls, “In November, the New York Times reported that the White House was working to codify rules to govern the targeted killing of terrorists by unmanned drones. The codification work was begun during last year’s presidential election. According to the report, the Obama administration wanted to provide Mitt Romney with a clear set of procedures and standards for the use of drone strikes, were he to be elected.”

“The president himself has spoken publicly about the need to better codify the use of drone strikes,” he writes.

“One of the things we’ve got to do is put a legal architecture in place,” he continued, “and we need Congressional help in order to do that, to make sure that not only am I reined in but any president’s reined in terms of some of the decisions that we’re making,” Obama said during an appearance on “The Daily Show with Jon Stewart” shortly before the election.”

There is something in place. It’s called the Constitution, something Barack Obama and members of Congress swore to support and defend. Specifically it’s called the Sixth Amendment that is being violated here. I realize that many people will scream about “terrorists” and all sorts of things, but the issue is that this administration and its thug partners are already defining those who believe that the Federal government is “too big for its britches” and are overstepping their bounds as “domestic terrorists.”

Additionally, our public education system is beginning the indoctrination of who is and is not a terrorist. The y are doing it by teaching that those that engaged in the Boston Tea Party were terrorists. Even our own government training agents that the Founding Fathers were terrorists.

In addition, I would like to point out the hypocrisy of those making the decisions to murder those who have not engaged in any acts of terrorism nor have they been proven to actually be plotting attacks on the United States. These same people within the Obama administration have supplied aid to the organization they say they are opposed to in Libya and more than likely in Syria, yet they do not target themselves, do they? No, they hide behind executive privilege and government charades.

We don’t see them coming clean on matters where they have put weapons in the hands of Mexican drug cartels that have resulted in the deaths of untold numbers of Mexicans and at least two federal agents.

This is not just chilling, it’s unlawful. It’s unconstitutional. It’s a mockery of our Constitution and before you say that you would never find yourself on the presidential “hit list,” perhaps you should consider the open talk of assassination by Defense Secretary Leon Panetta as he told CBS’ 60 Minutes, “If someone is a citizen of the United States and is a terrorist (I’ll note, is not proved to be a terrorist, just claimed to be one by the government) who wants to attack our people and kill Americans (again that would make a person a suspect and should be innocent until proven guilty) in ‘my book’ that person is a terrorist.”

I point this out because Panetta openly claims that the Federal government can bypass the Constitution and just do whatever they want to American citizens. How long before they start targeting State militia groups, true patriots, those that believe in the Second Amendment (contrary to Jesse Jackson’s claims), and even those opposed to the Obamacare mandate? How long before those “bitter clingers” of religion and guns are targeted as terrorists? Think about it.

The Racist Curriculum Chicago Public Schools will be Teaching

The Racist Curriculum Chicago Public Schools will be Teaching