While many believe the “birthers” are “right wing extremists,” there is much evidence that demonstrates that Barack Hussein Obama is not only ineligible for office, but that he is knowingly a usurper to the highest office in the land. The Obama eligibility case is likely to be heard in a court room by a judge who questions Obama’s eligibility. Judge Roy Moore was elected chief Justice of the Alabama Supreme Court last November, a decade after he defied a federal order to remove a Ten Commandments monument from the state Supreme Court building. Attorney Larry Klayman, founder of Judicial Watch and now the head of Freedom Watch, is appealing to Moore’s court after the Montgomery Circuit Court dismissed the Obama eligibility case.

2012 Constitution Party presidential nominee Virgil Goode and Alabama Republican Party leader Hugh McInnish are asking the state’s highest court to force Secretary of State Beth Chapman to verify that all candidates on the state’s 2012 ballot were eligible to serve.

“We are hopeful that Chief Justice Moore and the rest of the jurists on the Alabama Supreme Court will follow the law,” Klayman told WND.

Klayman says he and his team “have great respect for Chief Justice Moore and his integrity and legal acumen.”

“He is one courageous and brave man. There are few in this country.”

The case is an appeal of a dismissal by the Montgomery Circuit Court.

In his brief, Klayman says “credible evidence and information from an official source” was presented to Chapman before the election indicating Obama might not have been qualified for Oval Office.

The complaint argues Chapman failed her constitutional duty as secretary of state to verify the eligibility of candidates.

Last year, Moore defended Lt. Col. Terrence Lakin who was court-martialed, imprisoned, and stripped of all military rank and privileges because he refused to obey deployment orders, arguing that Obama had not documented his eligibility under Article 2, Section 1 of the U.S. Constitution.

Moore said Lakin “not only has a right to follow his personal convictions under the Constitution, he has a duty.”

“And if the authority running the efforts of the war is not a citizen in violation of the Constitution, the order is unlawful,” he said.

Klayman said that a refusal by Chapman to investigate the qualifications of candidates for president has resulted in “a person believed to be unqualified for that office” having been “elected.”

Following Obama’s taking the office for a second term in November, Judge Moore declared that Obama violated the Constitution by bombing Libya. He said, “No president has the power to violate constitutional restraints of power,” Moore said.

“There is little regard for the Constitution in the courts today, even the U.S. Supreme Court.”

Not only has there been the fake birth certificate, which Obama’s own attorney admitted was fraudulent, but even Barack and Michelle Obama, along with the Kenyan Ambassador Peter Ogego, have all said that Obama was either born in Kenya or referred to Kenya as “his homeland.” Sheriff Joe Arpaio brought additional evidence and claimed this is a national security issue. Lord Monckton called Obama an illegal president after demonstrating the fraudulent nature of the birth certificate and even Israeli Science claims that Obama’s birth certificate is a fake. Apparently so is Obama’s selective service card and his social security number.

In case you are skeptical, you should go back and read the Kenyan Parliament’s own minutes on November 5, 2008, where they openly stated,

“Mr. Obama, is a son of the soil of this country (Kenya). Every other country in this continent is celebrating the Obama win. It is only proper and fitting that the country which he originates should show the same excitement, pomp and colour.”

This statement was followed by the Deputy Speaker warning the member who just made the statement,

“You had better be very careful where you transgress between watching your own sovereignty and what can be interpreted in some quarters as some form of treason.” 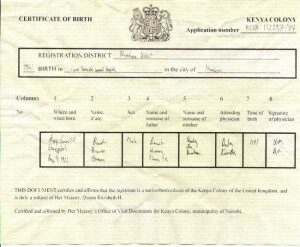 Several courts have listened to the Obama eligibility case, but rejected it. Even the U.S. Supreme Court was entertaining a request to move to oral arguments concerning Obama’s eligibility. Should the case get before Judge Roy Moore we should be able to at least have a decent hearing of the facts of the matter and a reasonable ruling. Freedom Outpost’s Publius Huldah has put forth exactly what the Founders intended in regards to being a natural born citizen and how it relates to the Constitution.

The video below walks you through the Kenyan Parliament’s documentation and much more:

Fact Check: Did Bill Nye Tell A Huge Lie About The Fossil Layers?

What to do When Forced to Perform Same Sex “Weddings”

What to do When Forced to Perform Same Sex “Weddings”