Obama: "I got Re-elected in Part because People did think I was Trustworthy"

Home » Obama: “I got Re-elected in Part because People did think I was Trustworthy”

That was a quote from President Obama’s recent interview with Barbara Walters at the White House. He also said, “Every president in their second term is mindful that you’ve only got a limited amount of time, and you want to make sure you are squeezing every last ounce of energy that you have to try to deliver on the commitments you made to the American people.”

Here is that interview:

Well I hate to break it to ya ‘Sparky,’ but no we don’t think you are trustworthy and as far as being “re-elected,” that point is up for debate. Nobody gets 99% of the vote during an election in several districts and in several states and I mean nobody. While it is true that Obama has set a new standard for an American President, a low standard that is, on everything from job performance to foreign policy. 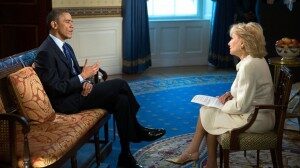 About those “commitments,” well our President is keeping one promise and that is to “fundamentally transform” this nation.

There was an article published here on Freedom Outpost about Obama’s 252 documented lies, and in my previous article, which was an open letter to President Obama, “You have lied so much and so many times to the American people, that not even you can keep track of them. And when you are confronted with a lie that you have told, you simply lie again to cover-up the previous one. That has to be exhausting.”

So why on earth would Obama even think that we find him “trustworthy”? It is one more example just how out of touch this moron really is. Or maybe, he just doesn’t give a rat’s behind. I think the latter part of those statements is the real case here.

Whatever the case, the President has shown the American people that he is woefully under-qualified to hold the office of President. Maybe, if we could find him a job more suited to his particular skill set, like- “Fund Raiser in Chief “or “Liar in Charge” or “Divider in Chief.” Those seem to be Obama’s real “talents.” But as far as being “Commander in Chief,” I don’t think so.

As far as most Americans finding Obama “trustworthy,” well that ship sank at the dock before it was even launched.

Excuse me Mr. President, but why don’t you ask the families of the four Benghazi dead or slain border agent Brian Terry’s family if they think you’re “trustworthy”?

Benghazi: Just Tell Them What They Want to Hear!

Benghazi: Just Tell Them What They Want to Hear!