In ancient times, in the Roman Republic, traitors and perjurers were the recipients of a special kind of punishment. If convicted, they were taken to a place of execution, a steep cliff of the southern summit of the Capitoline Hill, overlooking the Roman Forum, called The Tarpeian Rock. There, they were thrown to their deaths. In England during the reign of King Henry the 8th, it was a crime punishable by death, to envision the death of the King. Offenders of that crime were hanged, drawn, quartered and beheaded, with the head stuck on a spike on the London Bridge for all to see.

Today, we would consider that extreme. So what offense is justifiable for mocking President Obama? Well, if you were a Rodeo clown at the Missouri State Fair, who dared to wear an Obama mask while performing, you would be banned for life! 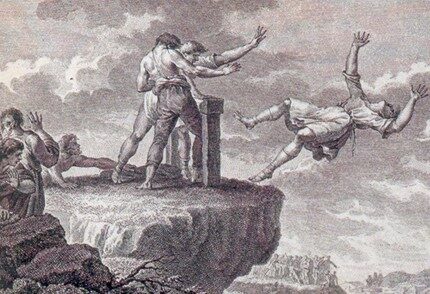 No, I am not joking! Because the Missouri State Fair receives money from the State, I guess such freedom of expression is verboten! Fair officials also say they are with the Missouri Rodeo Cowboys Association, which ran the event, and that the association’s personnel and performers must undergo sensitivity training if they are to work with the fair again. That association, meanwhile, has saying it wishes to “extend a sincere apology for the inappropriate act during the Bull Riding at the Saturday performance of the MRCA Rodeo.

But in 1994, a writer for the Philadelphia Inquirer chronicled a rodeo clown featuring George H.W. Bush.

The big white gate flew open. The bull came out bucking. The rider flopped from side to side and the bullfighters held back, letting the bull make his moves until the rider dropped off. Licciardello crouched in a heavily padded barrel, a human target should the bull decide to charge. Hawkins waited near the barrel, holding his big inner tube. A dummy with a George Bush mask stood beside the clown, propped up by a broomstick.

T.J. Hawkins rolled out the big inner tube, and the bull lowered his head, shot forward and launched into the tube, sending it bounding down the center of the arena. The crowd cheered. Then the bull saw the George Bush dummy. He tore into it, sending the rubber mask flying halfway across the sand as he turned toward the fence, sending cowboys scrambling up the fence rails, hooking one with his horn and tossing him off the fence.

On Tuesday, the Missouri State National Association for the Advancement of Colored People (NAACP) issued a statement asking for federal involvement in the case of a rodeo clown who wore an Obama mask and then asked the crowd if they’d like to see Obama run down by a bull. “The activities at the Missouri State Fair targeting and inciting violence against our President are serious and warrant a full review by both the Secret Service and the Justice Department,” said State President Mary Ratliff. “Incidents involving individuals acting out with extreme violent behavior in movie theaters, schools, churches, political appearances, and outdoor events in general speaks volume to the irresponsible behavior of all the parties involved with the incendiary events at the Missouri State Fair.”

One would have thought this Rodeo clown had hung Obama’s effigy from a burning cross while wearing a white hood, with all this backlash. 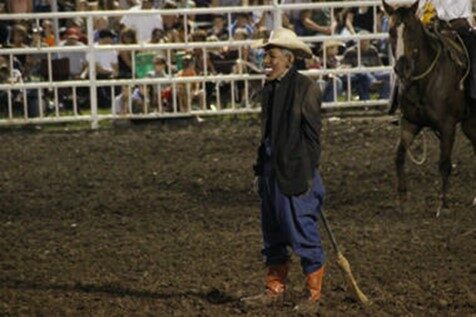 I thought we lived in a free country, where freedom of expression was a right guaranteed by the Constitution. What happened to that?  Well, one explanation could be; sure, that’s all well and good as long as you don’t mock Barrack Hussein Obama. Apparently, but if you ARE President Obama you can: Lie, commit voter fraud, make racist comments against anyone you like, put automatic weapons in the hands of our enemies and drug cartels, fund Islamic Jihad, use drones to kill American citizens, spy on the American people using the NSA and harass your political enemies using the IRS as your personal attack dogs. Yeah, that’s all well and good.

Since now the clown in question cannot peruse his vocation of choice and won’t be able to earn a living and feed himself for his horrific crime, maybe he qualifies for the Supplemental Nutrition Assistance Program (SNAP). Maybe this is another way to force people to vote Democrat eh?

Perhaps it would have been kinder to the clown to have simply thrown him off of the Tarpeian Rock!

Trump Wishes He Chose A Different Attorney General – We Do Too!