America’s largest mosque complex, officially known as Turkish-American Culture and Civilization Center, was built with Turkish funding under the supervision of the Turkish religious foundation (Diyanet). The $100 million mega mosque in Lanham, Maryland, will soon be open for Muslim worshipers in the Washington, DC area, as their link shows: “Turkey’s President Tayyip Erdoğan and US President Barack Obama are expected to open the mosque.”

I guess you can learn about your president’s next step towards building Islam in the U.S., not from your media, but from Erdogan’s official media Yeni Safak instead: 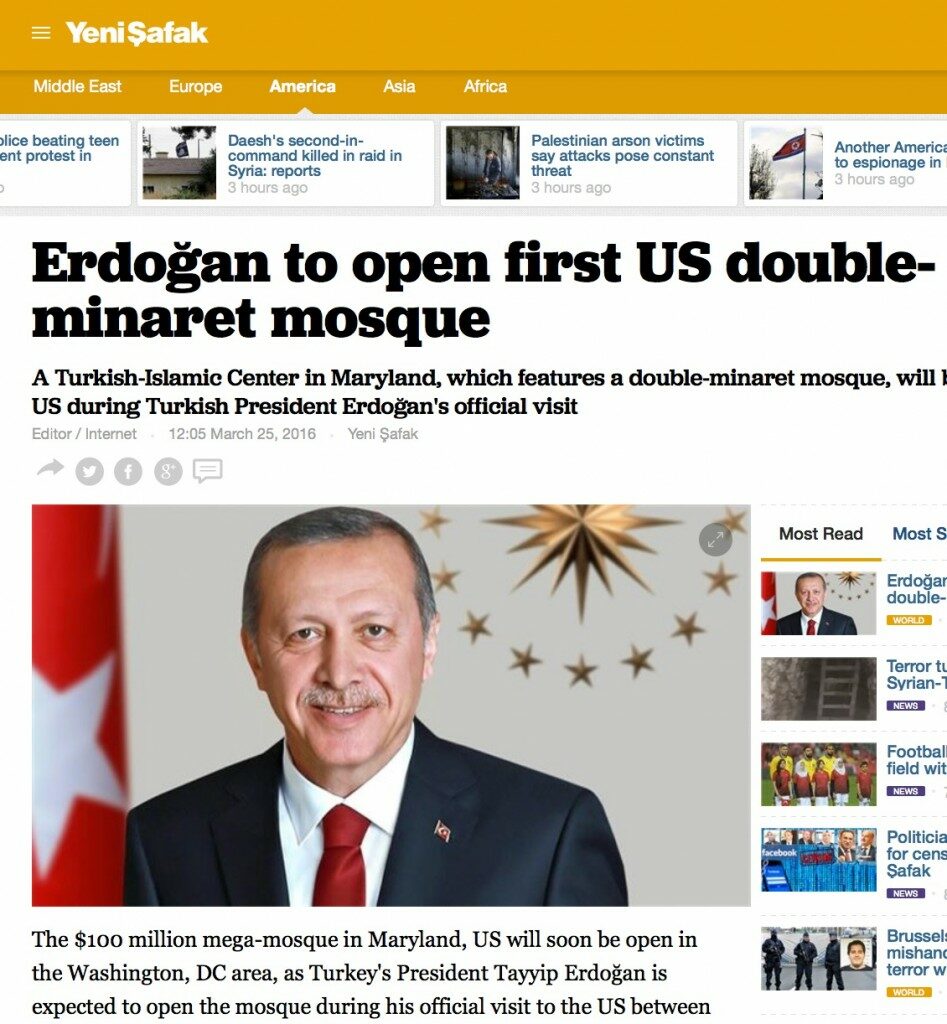 Do you see “US Double Minaret Mosque” above in the article Erdogan published? Why “Two Minarets”?

Turkey is an empire that will arise TWICE, once after it is wounded and another for its glory.

Even Daniel the prophet recognizes this feature, Antichrist loves to have his established castles between the “two seas”:

“And he shall plant the tabernacles of his palace between the [two] seas in the glorious holy mountain; yet he shall come to his end, and none shall help him.” (Daniel 11:45)

Will the West ever awake its slumber and learn just how packed each verse is in the scriptures?

The $100 million mega-mosque in Maryland, US will soon be open in the Washington, DC area, as Turkey’s President Tayyip Erdoğan is expected to open the mosque during his official visit to the US between March 29 and April 2.

America’s largest mosque complex, officially known as the Turkish-American Culture and Civilization Center, was built with Turkish funding under the supervision of the Turkish religious foundation (Diyanet). 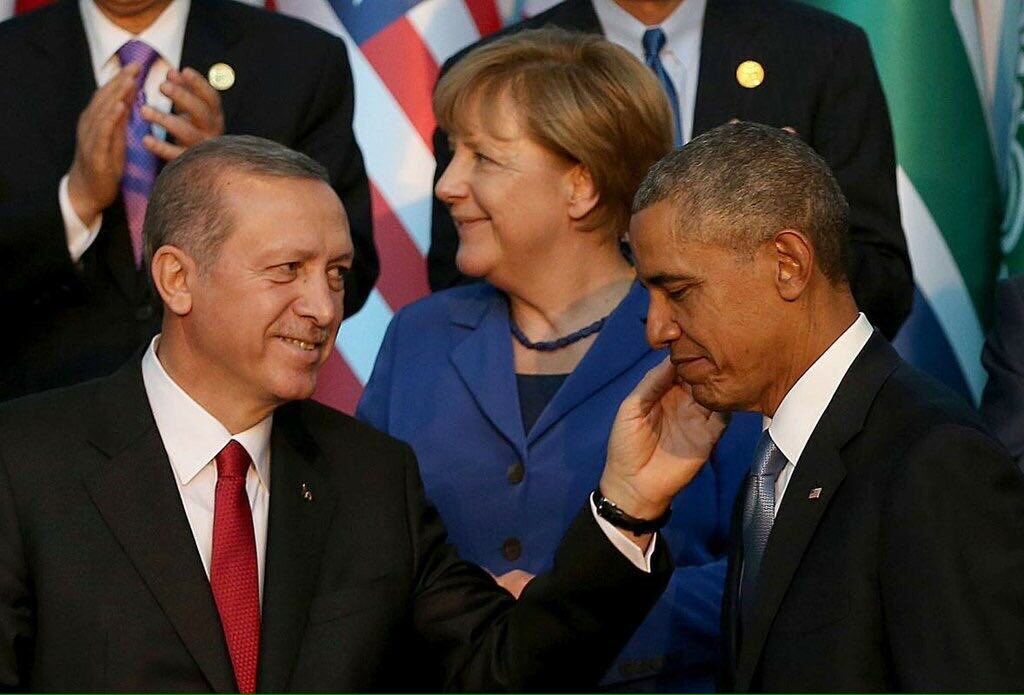 Will Obama disappoint his Caliph? No. Stupid Americans voted for this servant of the Sultan, Sovereign of the Two Continents

The mosque is part of the Turkish-Islamic Center also known as the “American Religious Center,” built on a large area in Lanham, Maryland that will have the capacity to host 3,000 Muslim worshippers indoors and outdoors.

Turkey builds $100 million mega mosque in Maryland, US will include a community building, a guest house, traditional Turkish houses, library, conference and exhibition halls, meeting rooms, reception, museum of Islamic art, coffee house, gift shops, cultural center, amphitheater, computer lab, library and even Turkish baths in the old Ottoman style … the works. It “aims at bringing all Muslims together, to enlighten people about the facts of Islam and guide believers to a correct way” says Yeni Safak. 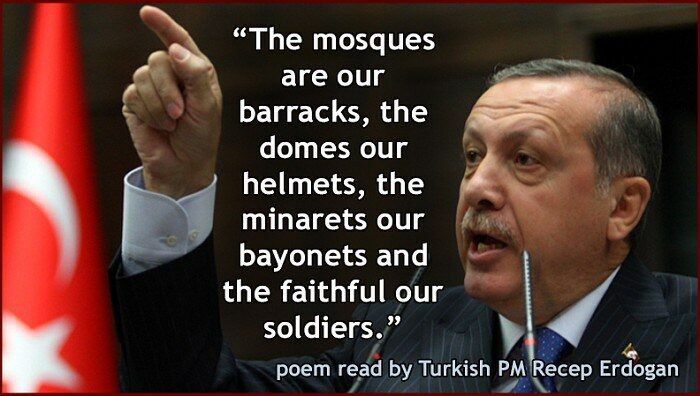 And these projects are not only in Maryland (keep in mind, it was called Maryland, as in the Land of Mary for Catholics), in Dayton you have some really excited stupid Americans there as well who enjoyed another mosque there too, courtesy of Antichrist Erdogan:

And it is not only in the U.S., Erdogan of Turkey wants to revive Islam in the “far reaches of the north” and is leading the Muslim world in shaping and spreading an objective: to speedily revive  Islam in the regions of the north, the Turkic republics in Central Asia and African nations. 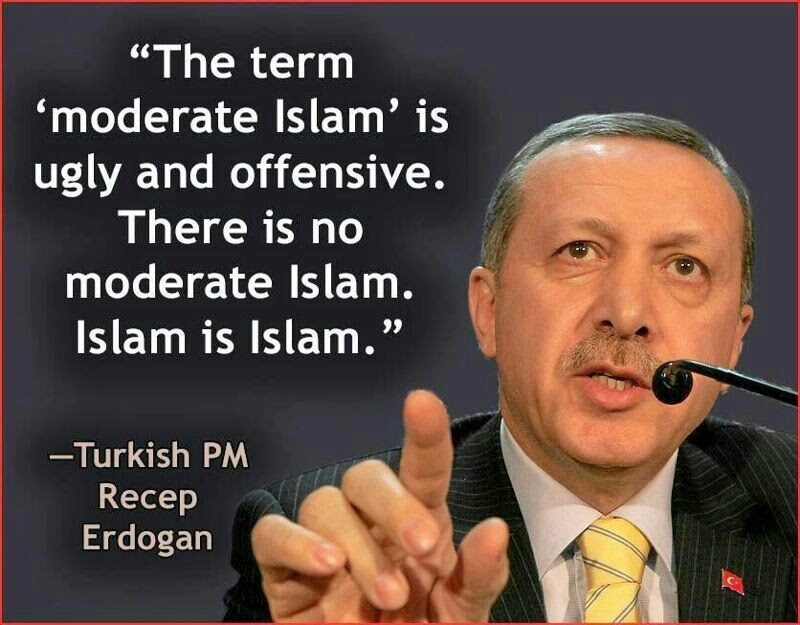 Believe it or not, the Turkish religious authority had had 200,267 meetings, conferences, panels and symposiums, all organized solely in the northern parts of the globe as an objective to influence non-Arab Muslim countries, especially in the Balkans. To Turkey Central Asia’s C.I.S nations (Uzbekistan, Tajikistan, Turkmenistan, Kazakhstan, Kyrgyzstan)  is the goal of this anti-Christ agenda and Turkey today takes the lead in what the Bible prophecies Antichrist will do in  the region of Meshech, Tubal, Gomer and BethTogarmah. 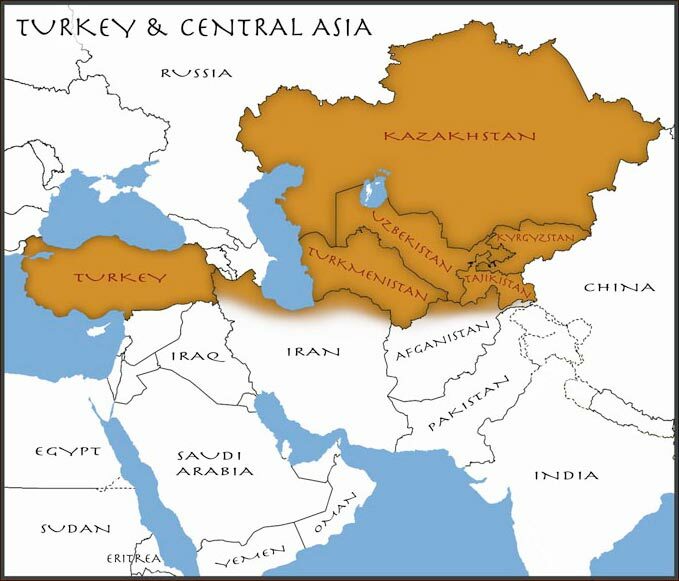 A state-sponsored program to build mosques in countries from Kazakhstan to Cuba has emerged as a foreign policy instrument for Turkey, boosting the country’s claim to a place on the international stage as a leader of the Islamic world that looks after Muslims everywhere. 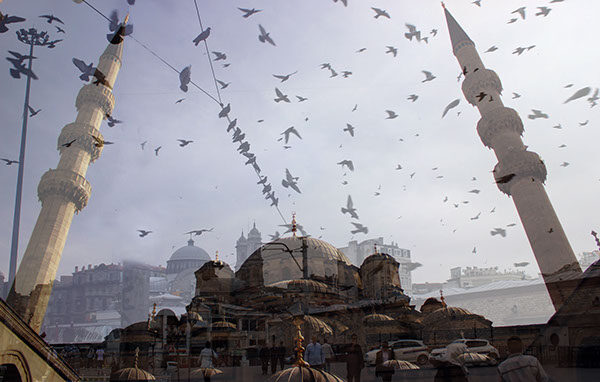 The Grand Mufti of Turkey, Mehmet Gormez, Turkey’s giant Directorate of Religious Affairs, which runs the country’s 85,000 mosques and employs 122,000 people, has assumed an increasingly active role in the government’s foreign policy. 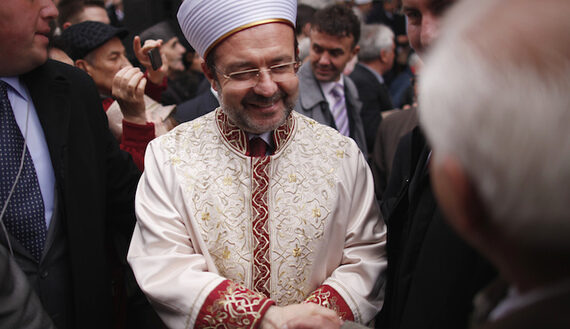 Grand Mufti of Turkey Mehmet Gormez shakes hands with an onlooker after an inauguration ceremony in front of the Gazi Husrev Begova Mosque in Sarajevo, Nov. 15, 2012.  (photo by REUTERS/Dado Ruvic)

A glance at its website is enough to see how active the directorate has become internationally. The institution’s 2013 activity report, available on the website, describes a transboundary agenda of “shaping and spreading an objective perception of Islam around the world.” It says the directorate aims “to present an understanding of Islam, which is based on Islam’s scientific foundations, and lead the efforts to spread it.” It notes that 200,267 meetings, conferences, panels and symposiums were organized abroad as part of this objective.

The above video shows more beneath the surface and Americans need to pay close attention! “Minarets have no mahya” says Erdoğan. Mahya is a string of lights that links minarets with Islamic banners.

Here is a photo of the American mosque in Maryland from Erdogan’s own source, Yeni Safak, notice the connect between the two minarets: 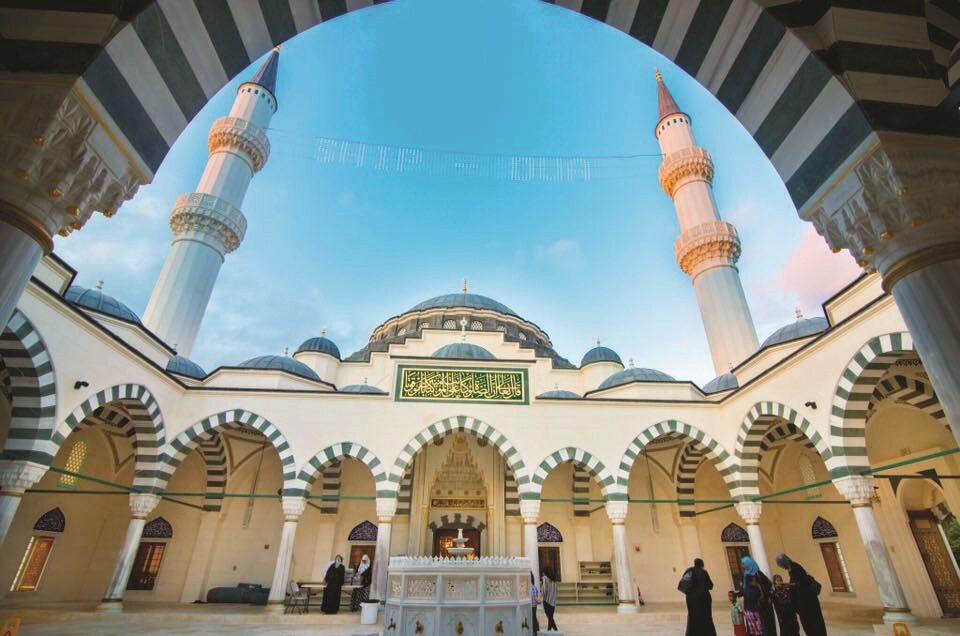 Notice carefully, the words “Ship” “Dua”. “Dua” is Prayer. Turkey’s symbol is the Tugra(see image below). According to the Tughra Analysis and Form Turkey’s emblem represents a ship: “The three vertical letter “alef” (III) with what appears three looking squiggles SSS represent ship masts with the sails going westward to invade and conquer the west [Europe]” (to learn more click here). 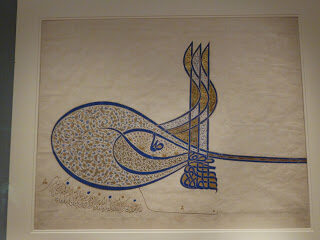 This is Erdoğan’s dream, a symbolic link with all mosques (minarets) across the globe, especially in the Caucasus in order to unite all Muslim lands to himself. Such a connection is why Erdoğan is building a grand mosque in the U.S. (with many more to come with the help from President Barack Hussein Obama) as claimed by Turkey’s Minister of Foreign Affairs, Mevlüt Çavuşoğlu. What Erdogan says in the video above is a prayer of victory:

“We all have a hoarse voice… do not leave our minarets with no calls to prayer, my God! Either bring us those who make honey or do not just leave us with no hive, my God!

Minarets have no mahya [a string of lights set up between two minarets to flash a short text, often featuring moral or religious themes]…

and with no country, my God!”

This is his prayer for the coming Mahdi “the hero.”

All over Europe, the Middle East and Asia, Erdogan takes the lead in mosque building where the Saudis dream of advancing as Turkey in mosque building. The directorate’s wide range of overseas activities includes 80 visits paid by official delegations to Islamic countries or countries with Muslim communities, as well as joint initiatives in 79 countries, mostly Turkic republics in Central Asia and African nations, to provide mosques, schools and other educational services. A total of 3,791 students have been brought from the Balkans, the Turkic republics and Africa to study in Turkey’s imam-hatip religious high schools, Quranic courses, and post-graduate and doctoral programs. 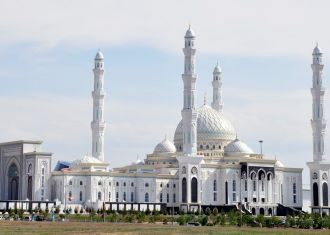 “Hazrat Sultan” is the mosque in Astana, Kazakhstan, the biggest mosque in Central Asia.

Observers of the directorate’s activities say the institution has notably increased its influence over Islamic institutions in non-Arab Muslim countries, especially in the Balkans.

Erdogan added that the Directorate of Religious Affairs, or Diyanet (Religion) a Turkish state institution that administers Turkey’s 80,000 mosques and runs the international mosque-building program via a foundation, and Turkey’s development aid agency, TIKA, would keep track of the mosque project in Cuba. “There has been no negative approach” by the Cuban authorities regarding the Turkish proposal, Erdogan said.

According to the Diyanet, Turkey is currently involved in the construction of 18 big mosques in about a dozen countries, including the United States, Russia, Kazakhstan,Kyrgyzstan, Albania, the Philippines, the United Kingdom, Palestine and Somalia. In total, the Diyanet foundation TDV has overseen the construction of around 50 mosques in 25 foreign countries since it was created in 1975.

The ongoing project in Tirana, the capital of Albania, will be the biggest mosque in the Balkans, providing praying space for 4,500 worshippers. The Diyanet says it’s also helping to repair mosques abroad that have been damaged by war. 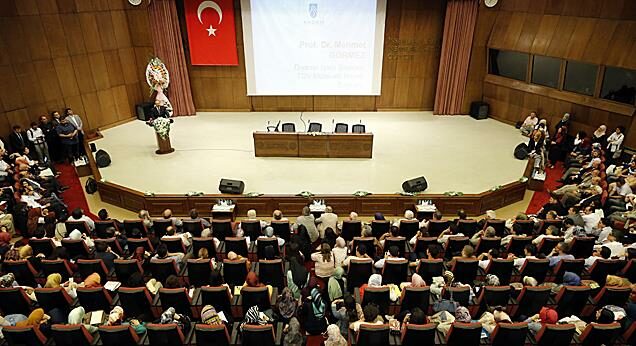 The purpose of the mosque-building project goes beyond the aim of providing Muslims in other countries with modern places of worship. Speaking about the mosques and Turkey’s humanitarian aid program, TDV official Mazhar Bilgin said recently that the country had “become the sole hope for Muslims in the world.”

The guise for Turkey in selling its idea is simple. The help offered by Turkey is claimed to prevent radical groups, but truth is, it is an instrument of soft power to widen Turkey’s influence and to become the role model for all Muslim nations.

In a nutshell, expect to see Sufi Islam in a mosque near you with sounds of Allahu-Akbar.