Did Obamacare Cause an Increase in Part-Time Jobs? No Says Ritholtz and Reuters; I Say Yes

Home » Did Obamacare Cause an Increase in Part-Time Jobs? No Says Ritholtz and Reuters; I Say Yes

A friend sent me an article in Reuters today that claims Little evidence yet that Obamacare costing full-time jobs. 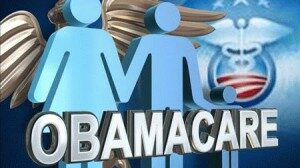 One in five businesses in the service sector think President Barack Obama’s signature healthcare reform has hurt employment at their firms over the last three months, a National Association of Business Economics survey showed on Monday.

But there is little discernible impact in the employment figures released in recent months, including the September numbers out on Tuesday. The number of people with part-time jobs who want full-time work, for example, was essentially flat in September at 7.9 million.

The number of part-time workers spiked in 2008, well before Obamacare was enacted, and has been slowly falling as a share of total employment since 2010. In September people working part time because they could not find full-time work made up 5.5 percent of the employed, unchanged from August. The spike in 2008 and the steady drift downward since then suggests the elevated level of part-time workers is more likely due to the economy’s weakness.

Did Obamacare Cause an Increase in Part-Time Jobs?

Barry Ritholtz at the Big Picture Blog says “no” in his October 7 post Did Obamacare Cause an Increase in Part-Time Employment?

“How can you make investment decisions about future returns in light of Obamacare driving so many workers to part time status?“

Ahhh, a classic bit of misdirection — an assumption built into a question. The first step in answering that is to verify the reality of that assumption: Has Obamacare actually caused an increase in part-time employment?

As you can see in the black line below, the number of part time workers spiked because of the Great Recession. It peaked and began to slowly reverse before the ACA [Affordable Care Act – Obamacare] was even passed. 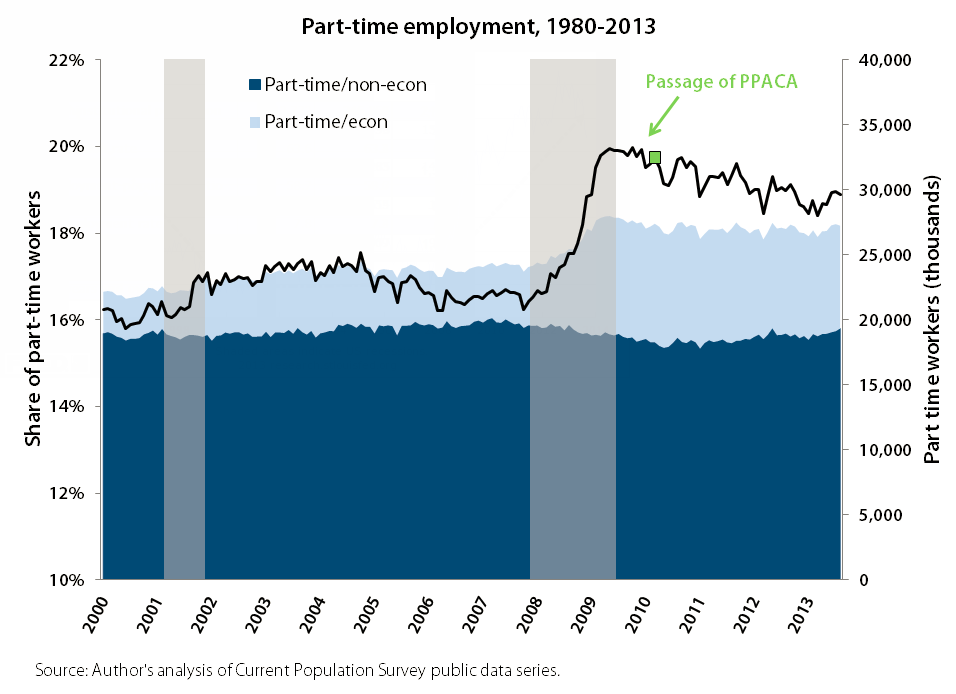 No, there does not appear to be an increase caused by Obamacare.

For now, let’s assume the above chart from the Economic Policy Institute is correct. Does that imply there was no Obamacare effect?

Of course not, and Ritholtz should know better.

Even if the EPI chart is correct, it does not show what would have happened had Obamacare not passed.

Realistically, to determine the Obamacare effect, we need to measure what we didn’t see (which is what would have happened in the absence of Obamacare).

I am inclined to believe what corporate CEOs are saying given strong evidence they did what they said.

Reuters reported “Many businesses polled by the NABE said they were holding back on hiring due to the costs imposed by the law. The survey also showed 15 percent of service sector firms planned to shift to more part-time workers due to Obamacare.“

OK Mish, Why Doesn’t the EPI Chart Support Your Case? 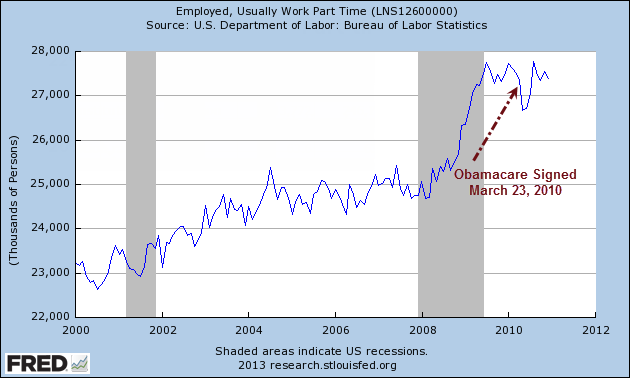 Let’s hone in on that for a closer look. 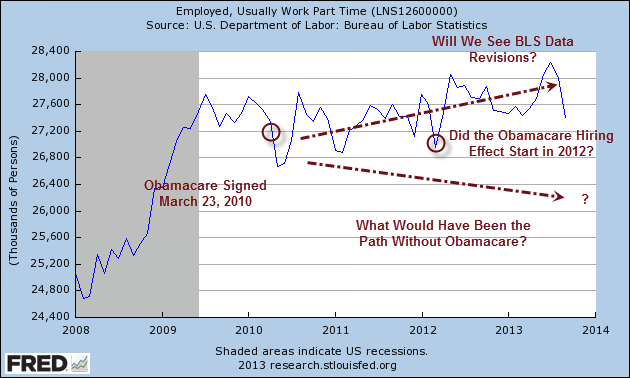 Q.What would the chart look like without Obamacare?
A. Better

Q. Was the Obamcare hiring effect delayed until 2012?
A. Probable. That is when CEOs started complaining. That is when numerous restaurants cut back hours.

Q. Will we see BLS revisions that make the reported data look worse?
A. Probable

Q. Does the Economic Policy Institute chart reflect reality?
A. The chart from the St. Louis Fed is a closer approximation, but revisions are likely

Q. Has Obamacare actually caused an increase in part-time employment?
A. Absolutely.

That is what the chart suggests (even before expected BLS revisions). That is what CEOs say. And that is what plain common sense suggests in the first place (even though we will not understand the full impact for years, if ever).

George Zimmerman, the 911 Operator and the Search for Truth

George Zimmerman, the 911 Operator and the Search for Truth