On Friday Barack Obama issued an executive order on climate change which directs a government-wide effort to boost preparation in states and local communities for the impact of global warming, you know that scam that has been pushed on the world for the past couple of decades? Yes, that global warming. This executive order expands upon his previous one following Hurricane Sandy and will not only cost billions in taxpayer dollars, but will drive up the cost of energy. 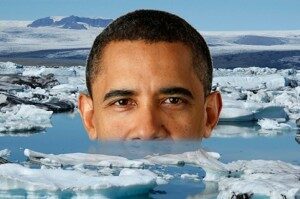 The order reads that the feds will be working to build “resilience” against major storms and other weather extremes. No doubt this is going to cost a lot of money, which I was under the impression that we just don’t have.

“The impacts of climate change — including an increase in prolonged periods of excessively high temperatures, more heavy downpours, an increase in wildfires, more severe droughts, permafrost thawing, ocean acidification and sea-level rise — are already affecting communities, natural resources, ecosystems, economies and public health across the nation,” the executive order reads. “The federal government must build on recent progress and pursue new strategies to improve the nation’s preparedness and resilience.”

Oh, and you can count on more government bureaucracy as this executive order establishes the Council on Climate Preparedness and Resilience.

Already, the federal government has been shown to be inefficient in dealing with major weather related issues. Just look at New York and New Jersey in 2012 and you can readily recognize how inefficient FEMA was. Local authorities and charity groups were far more helpful than the feds. In fact, one could argue that the states keeping the money this will cost would be best used to serve the people, rather than Washington.

However, it’s the underhanded and deceitful way this is promoted. It’s promoted as “climate change.”

Following Hurricane Sandy, Obama issued an executive order which called on Americans to adapt to climate change. He wrote:

Obama adds to the previous executive order with this one, ordering the Department of Defense, EPA, NOAA, and several other agencies to meet within nine months and create a plan to adapt their land- and water-related policies to protect watersheds and natural resources in the face of climate change, including a timeline for any changes.

An overhaul plan revealed earlier this year was praised by many for its efforts at adding protections against climate change. Its actual effects though are proving devastating. Already, the EPA has moved forward with attempts to reduce coal plant pollution by requiring new plants to adopt carbon capture systems in the coming years, and more changes are on the horizon.

Already Obama’s war on coal has forced the shutdown of a 60 year old Utah coal plant, with subsequent job loss and increased prices in energy.

However, Obama isn’t stopping there. No, he’s using taxpayer money, $8 billion in fact, to wage war on coal. So he’s using our tax money to fight companies that provide us with cheap energy, in order to drive up the cost. Americans are being screwed from both ends by Obama, while at the same time his miserable failures are being kept under wraps by his useful idiots, the media.