The Obama administration is engaged in a four-part plot to eviscerate both the First and Second Amendments;

Then there is the X-factor: does anyone else wonder why this administration is so determined to end the private ownership of guns when it has been clearly established that those areas who have the most stringent gun control (e.g., New York, Chicago, and Washington DC) also have the highest gun violence and homicide rates?

What will this administration do once they have all of our guns? What are trying to accomplish?

I was recently having a discussion with Doug Hagmann about how much we have learned about what is coming. We also collectively bemoaned the fact that sometimes we have interesting facts, but sometimes we are not able to fully appreciate the significance of some events until they fall into context at a later time.

This article deals with this reality of our previous failure to connect some very ominous dots. Over the past three months, I have had information but did not appreciate how the facts demonstrate such a well-orchestrated plot designed to eradicate the Constitution by obliterating the First and Second Amendments to the Constitution as a direct result of ushering in more false flag events designed to eliminate all private gun ownership. This plot also includes the silencing of all governmental critics and destroying the fabric of the American jurisprudence system. We now have enough contextual data to identify a clear and undeniable pattern to demonstrate that there is a very thin line between our Constitutionally protected rights and falling into the abyss of living under a type of East German Stasi society.

Finally, I feel that I have fully connected these dots. The plot is child-like in its simplicity, and it is not new.

And, of course, please allow me, one more time to remind everyone what Mao had to say on this topic: 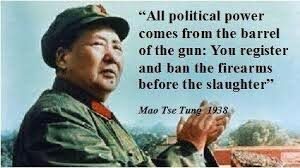 The Independent Media has been relentless in their criticism of the heinous and unconstitutional proclamations by Attorney General Loretta Lynch, as she promised to prosecute any journalist who dared to speak out about the folly of the Muslim-inspired Refugee/Resettlement Program or to criticize radicalized Muslims, estimated to be 10% of the Muslim population, who would do/have done innocent people harm. Lynch also went on to say that she was interested in preventing anti-government rhetoric, as well. In other words, the First Amendment is on life-support.

Sometimes, if we just pay attention, our opponents will give us the ammunition we need to expose an improper and immoral agenda.

Assistant Attorney General John Carlin would eliminate the Bill of Rights, if given the opportunity.

To help combat them, the department has created a new counsel that will coordinate the investigation and prosecution of anti-government and hate groups.” (Editor’s note: It is legal to be anti-government in one’s speech, and this attitude does not imply the subsequent use of violence).

From CNN, “Assistant Attorney General John Carlin, who oversees national security at the Justice Department, announced the new position — the Domestic Terrorism Counsel — following a number of violent attacks or plots against the U.S. that he said were motivated by “anti-government views, racism, bigotry and anarchy, and other despicable beliefs.”

This is the very Domestic Terrorism Counsel that Doug Hagmann and I have identified that has devoted a task force to harassing and silencing members of the Independent Media for daring to express the “wrong views.” We have learned that there are over 20 Justice officials and one US Attorney who report directly to Carlin on the activities of the members of the Independent Media.

Please take note of the use of the strategy often referred to as incrementalism. Carlin vilifies groups that most Americans do not approve of (e.g., the KKK, overt practices of racism, acts of violence, etc.). However, Carlin slips into his rhetoric that anyone that characterizes any person harboring any expressed anti-government views as a domestic terrorist. This is a thinly veiled attempt to end all criticism of the government and government officials. This action, by Carlin, was the precursor to Lynch’s public threats made against the Independent Media of this country.

Historically, it has been in the DNA of America to oppose governmental tyranny, such as what we are witnessing in today’s Obama administration. It is our duty to protect and defend the Constitution. However, these “Anti-government” views and activities are being characterized as the actions of a domestic terrorist by this administration.

From the NDAA to the plethora of illegal and unconstitutional Executive Orders, the present (Obama) administration has made a mockery of the Constitution.

Again, the CNN coverage of Carlin’s inflammatory comments continues, “Groups such as ISIS and al Qaeda, who are inspired by religious extremism, are designated by our federal government as terror organizations, which makes it illegal to support or assist them. But no such statute exist to prosecute white supremacists, the Ku Klux Klan or anti-government extremists, forcing federal law enforcement to find more concrete charges to lock them up.”

Did the Assistant Attorney General of the United States subtly ridicule the fact that law enforcement must have “concrete charges” before locking up a criminal? Is the number two person in charge of our legal system mocking due process and characterizing it as a handicap to proper law enforcement practices?

Please also take note of the “guilt by association strategy” being employed by Carlin. Reasonable Americans do not sanction the actions of white supremacists groups, such as the Klan. However, in the same series sentence, Carlin throws in the term anti-government extremists. Therefore, are we to conclude that if American citizens oppose the wealth redistribution strategies of the Obama administration which has led to the largest income gap in the history of this country, they are to be considered domestic terrorists? If Americans oppose the unconstitutional Trans Pacific Partnership, they are to be considered to be home-grown terrorists? Please note that all Americans who oppose the communist-inspired actions of this administration are not white supremacists or planning to blow up buildings. Therefore, being a supporter of the Constitution is what is being criminalized here.

Do you remember when, this past fall, journalists such as Lisa Haven, introduced the American people to the newly announced Strong Cities Network, whose job it is to combat home-grown domestic terrorism? On September 29, 2015, Loretta Lynch announced, in her speech to the United Nations General Assembly, the formation of a global police force that is targeting domestic terrorists. Several American cities are involved.

Here is Haven’s very accurate description of this New World Order program, which has granted itself the authority to supersede the United States Constitution. There can be no other way to interpret this – America is now under a UN mandate to outlaw all criticism of the state. The time-honored practices of governmental criticism and public debate are quickly coming to a close. All Americans must pay homage to the new (world) authority or face dire consequences.

Here is Haven’s summary of Loretta Lynch’s first major violation of her oath of office to “protect and defend the Constitution of the United States from all enemies both foreign and domestic.”

A Direct Threat Against the People of the United States

Illinois House Resolution 855, urges “the courts, especially the U.S. Supreme Court, to adhere to the clear wording of the Second Amendment being a right afforded to state sponsored militias and not individuals.” This is a thinly veiled attempt to disarm the people. I have covered, on multiple occasions, how, in the 20th century, there were a total of 17 genocides perpetrated against various citizens by their government. In each instance, the government confiscated the guns of its citizens prior to murdering them. Please tell me why this should be considered to be any different?

As if this Illinois resolution is not enough, the Assault Weapons Ban of 2015, introduced by Representative Cicilline (D-RI), would target semi-automatic and other military-style guns; this should convince you that both our First and Second Amendment rights are being attacked. This bill guarantees that no so-called assault weapons are to be manufactured for consumer use and places new restrictions on the sale of existing assault weapons. The legislation is supported by 90 Democratic co-sponsors. This bill has little hope of passing through Congress. However, passage of these actions is not the point. These actions will simply remain dormant until the next big series of false flag attacks take place. These are acts of psychological conditioning for when the majority of sheep wrongly and desperately look to their government for security. So long as they are willing to sacrifice their security, most Americans (not all) will capitulate and give up their guns. That’s when this generation’s Hunger Games will begin–or should I say genocide instead?