Last week, when the US government was shut down for lack of money, the Department of Defense informed the US Congress about its plans to deliver 10 billion dollars of US weapons hardware to Saudi Arabia and the United Arab Emirates (UAE). In case you have forgotten, Saudi Arabia and the United Arab Emirates just happen to be two of the world’s top Sunni financiers of global terror.

The US weapons systems slated for delivery include bunker buster bombs, sophisticated Boeing made Standoff Land Attack Extended Range (SLAM-ER) bombs and Raytheon Joint Standoff Weapons (JSOW) cruise missiles. These weapons systems —for the first time in history—will provide Sunni Islamist monarchies US made F-15’s and F-16’s with the power to destroy ground targets from as far away as 100 kilometers. 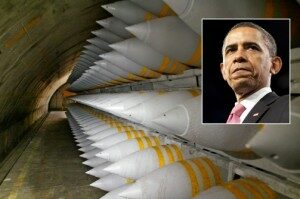 There is no denying that prior to 911, Sunni Islamists (Saudi Arabia, Qatar and the UAE) were long time customers of the US Defense establishment. After Islamist financed Al- Qaeda terrorists attacked America on September 11, 2001, the Bush administration, understandably scaled back its defense department contracts with Saudi Arabia and other countries long suspected of providing financial support to Islamist terror. Since 2010, President Obama’s Department of Defense has eagerly pursued—with little opposition from Congress—new historic Middle Eastern arms deals.

If you are wondering why the Republicans and Democrats—who have 30 days to protest this deal—will more than likely acquiesce to Defense Secretary Chuck Hegel’s plan, look no further than Boeing and Raytheon.

According to the Defense Security Cooperation Agency (DSCA) —supposedly founded on a tradition of cooperation between the United States and other sovereign nations with similar values and interests—the weapons shipment to these Gulf States “will contribute to the foreign policy and national security of the United States by improving the security of friendly countries that remain forces for stability.”

Washington would like America to believe that Saudi Arabia and the United Arab Emirates require these weapons to aid the United States in isolating Iran’s unfriendly nuclear ambitions. This is the same Washington drivel that attempted to lead us into another war to support the Saudi backed Al Qaeda affiliated Al Nusrah Front rebels overthrow of Bashir Assad’s Syrian regime.

US foreign policy, both the Bush and Obama foreign policy, has done little to discourage Iran’s nuclear weapons development program. Now the US Department of Defense is planning to arm Gulf States (known supporters of Islamist terror) in order to provide stability in a region that grows increasingly more unstable because of ISLAMIST TERROR. This is like arming the Zeta cartel to provide stability in Mexico’s drug wars that are spilling over into US Border States and beyond.

Does the US Congress intend to support the arming of Gulf state governments responsible for financing past-unprovoked attacks on Americans here and abroad?

Clearly, the boys and girls in Washington know better than to allow this to happen. Then again, with the 2014 election right around the corner and defense contractor money pouring into Washington like illegal immigrants flowing to US entitlement programs, my guess is this Gulf states weapons transfer is already done deal.

Interview: Obama Had Marxist Vision For US At Occidental College

Interview: Obama Had Marxist Vision For US At Occidental College