Officials Warn: “Make Sure You Are Prepared for a Period of Disruption” Before Michael Brown Decision

The tension near Ferguson, Missouri, is nearly palpable right now, as area residents await the Grand Jury’s decision on whether to bring criminal charges against Ferguson Police Officer Darren Wilson for the fatal shooting of Michael Brown in August.

The shooting of a black teen by a white police officer was followed by riots, looting, and civil unrest that lasted for weeks.

Local officials believe that it doesn’t matter which way the verdict goes: violence will most likely erupt again.

Area schools have sent out notices, warning parents of the potential for emergency actions to be taken by the school and allowing for the possibility that some parents may opt to keep their students home. 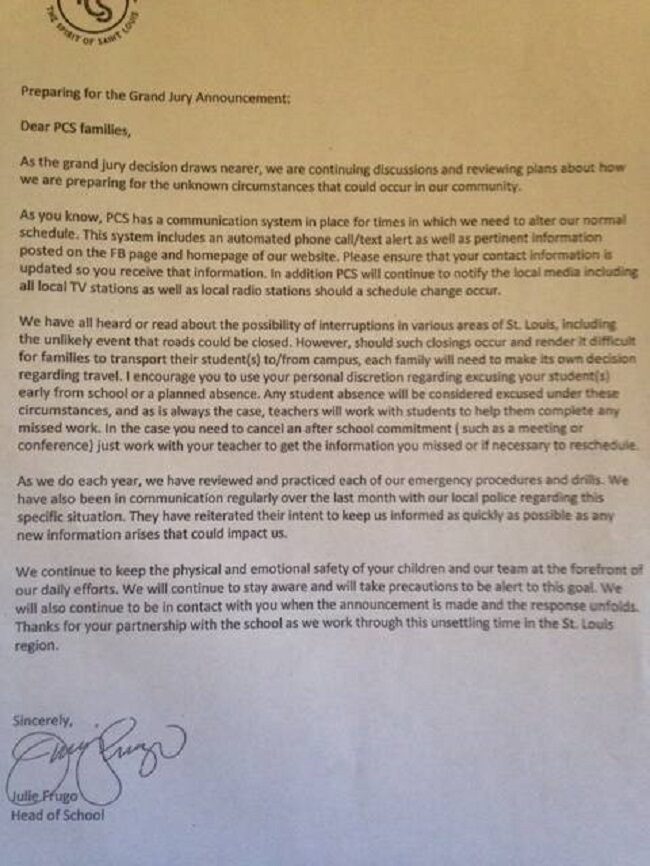 As well, a local township has sent out a letter warning residents to stock up on supplies before the decision. 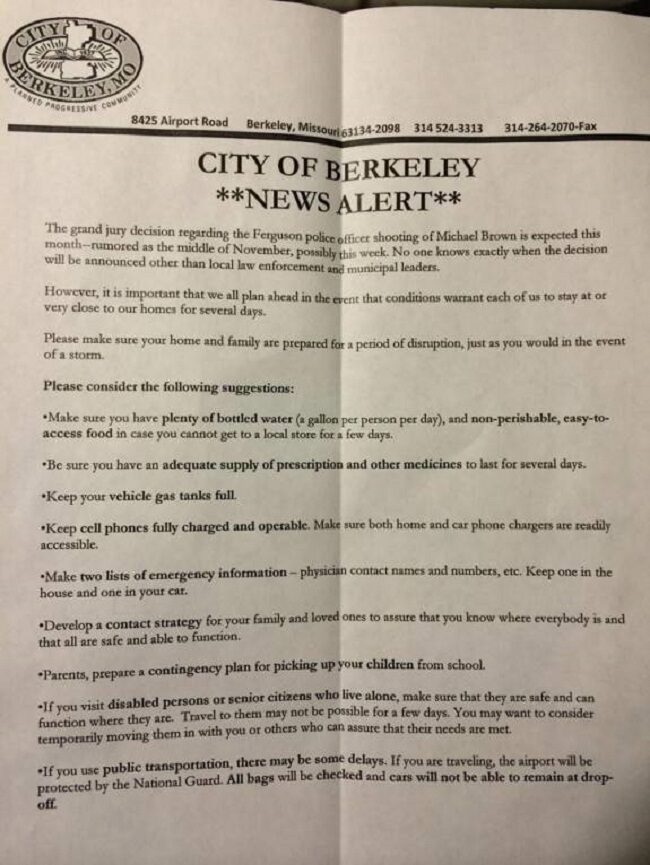 After the previous riots, business owners are wary.

“We’re hearing some rather specific threats through law enforcement and customers coming in the store,” John Stephenson, the general manager of Metro Shooting Supplies in nearby Bridgeton, told ABC News. “I can’t take them as cast in concrete, but word is on the street they’re going to be hitting gun stores.” (source)

Are you prepared for civil unrest?

The thing about racially motivated conflicts is that the divisive emotions and actions can spread far beyond the local area. You don’t have to live in the Ferguson area to face the potential for civil unrest. Here’s a synopsis of the threats during such an event and what you can do to prepare for them. (These preparedness tips were previously published on The Organic Prepper)

In this case, there’s nothing like a good sports analogy. “The best defense is a good offense.”

When the looting began in Ferguson, nearly every store in town was ransacked. Two of them, however were not: St. Louis Ink Tattoo Studio and County Guns.

It turns out that when violent looters come face to face with people prepared to kill to defend their property, the looters tend to choose a ‘safer’ target.

The take-home lesson here is this: If the situation has broken down to the point that looters are running around carrying TVs down the street, you’d better make it very clear that you are NOT a victim and that you WILL fight back.  There are plenty of people who have been brainwashed by the media to believe that guns are bad who will be far easier pickings for those who want to steal.  Looters will select the easiest targets – not those who are clearly determined to fight back.

The best way to win a fight is to avoid getting into that fight in the first place. Secure your home and lay low, but be prepared if trouble comes to visit.

Here are some tips to make your home less of a target:

If, despite your best efforts, your property draws the attention of people with ill intent, you must be ready to defend your family and your home.

It’s very important to make a defense plan well before you need one.

Violence for the sake of violence

Not every criminal frolicking through a WROL zone is there to steal. Some people want to hurt people just for the rush of power it gives them.

There is no pacifist answer to an encounter like this. If someone wants to do harm because they find it enjoyable, or because they are swept up in a mob mentality, you have to meet force with greater force.

In these situations, firearms are the great equalizer.

I can’t repeat this enough: you must practice. Frequently. If you don’t know how to use a firearm, you shouldn’t have it.  When you handle your weapon awkwardly, it’s very obvious to a person who is trying to intimidate you. Likewise, if you are so comfortable with your weapon that it looks like a natural extension of your arm, that is also very clear. It sends a message that you mean business and that you know what you’re doing. No one wants to get shot. Most thugs will search for an easier target.

Of course, it’s better still to avoid these encounters.  When your city is under siege, it’s far safer to stay home.  Don’t go to work or send the kids to school. Wait until normalcy returns to go about your business.  It isn’t worth risking your life.

Of enormous concern in these situations is the destruction of property.

For some, vandalizing and destroying property is the order of the day.  Often, times of civil unrest give people of a certain mentality the excuse they need to seek vengeance against those who have “more” than they do.  Tensions erupt between the “haves” and the “have-nots.”  When this occurs, often, destruction of property is the way these people choose to show their “power.”

While this starts out as purely a property crime, the situation can quickly turn violent. If someone is outside bashing the headlights of your vehicle, it isn’t a far stretch to think that they’ll bash on you if you confront them.

How to respond to this is a very individual decision, and depends to a great extent on your personal skill levels and confidence.

If you are a person who is unaccustomed to physical confrontations, you may be better off staying inside and calling your insurance company after the fact. No possession is worth your life or the lives of your family.

Alternatively, in some situations, it won’t stop with the destruction of your property. You may have to defend your home. Fire is of enormous concern in these types of scenarios.  Fire is a cowardly attack that doesn’t require any interaction on the part of the arsonist. It flushes out the family inside, leaving you vulnerable to physical assaults.

Running out of supplies

The most preventable issue in the event of civil unrest is running out of supplies.

If you have to “run out to the store,” that makes it far more likely that you will become the victim of a crime. The best advice I can give in all of this is to STAY HOME.  But if you have no food and water, it’s difficult to do so.

Many residents of Ferguson are facing exactly this problem. They are “stuck” at home and have run out of groceries.

Keith Griffin II, publisher of DELUX Magazine, set up a table near gas pump 6 at the QuikTrip on West Florissant Avenue, where he is distributing free pizza, chips, fresh fruit, and bottled water to protesters and area residents.

Griffin, 37, said he grew up in the area and he’s concerned about the welfare of local residents.

He’s also putting together care packages to people who are stuck because of the protests and curfew, he said. (source: St. Louis Times)

So, after only ONE WEEK, people are running out of food or discovering there is a necessity that they don’t have on hand.

I can’t imagine not having enough supplies to withstand a siege of only a week.  The way this is snowballing, the situation could easily last for a lot longer than just a week.  Even if you think prepping is silly and paranoid, how could anyone watching this unfold not feel as though they need to be stocked up for at least a month?  Ferguson is not a bad neighborhood in New York City. It’s a little suburb of just over 20,000 people. If this can happen in Ferguson, Missouri, it can happen where you are, and it can happen without any warning at all.

Here is a general list of supplies to have on hand. Remember that sometimes power supplies are lost during situations like this. Occasionally officials do this to gain more control over the populace and sometimes it happens as a side-effect of the wholesale destruction by the rioters. Keep the potential for a down-grid situation in mind when preparing.

It seems that right now in Ferguson, the US Constitution has been suspended. The National Guard has been called in to help police restore order. Like I said above, this is not an article about the constitutionality (or lack thereof) of what is going on down there, nor is it about police brutality or racial tensions. This article focuses on surviving the situation, should such an event occur in your town.

The reality is this:

While many of the officers involved most likely just want to resolve the situation and go home to their families, the methods being used are not methods most of us wish to encounter.

In a highly charged situation like this, police and military are trained to use the most efficient methods to speedily shut down a conflict. These methods can include tear gas, sound cannons, and outright physical assaults on citizens. It’s important to note that fear can be a powerful motivator when deciding how much force is appropriate when addressing a threat. Cops are just as subject to fear as the rest of us. 20 cops with shields and batons would be quite reasonable to fear an angry mob of hundreds of shouting people.

Your safety when interacting with officials during a martial law situation does not rely on the intentions of police officers and military. It really doesn’t matter if they are trying to crush your rights under a jack-booted heel, or whether they are trying to benevolently keep people safe and re-establish peace and harmony.

Here are some suggestions to help keep you safe when dealing with cops and soldiers.

Underneath the uniform, cops are human.  I’m not justifying the brutality, the methods they’re using, or the assaults on journalists. Cops are just as likely to be swept up in a herd mentality as thugs are during a high stress situation. By understanding this, you can be better prepared.

I really can’t repeat that often enough. It’s the number one way to keep yourself safer from every single threat mentioned in this article. If you find yourself in an area under siege, the odds will be further on your side for every interaction in which you avoid taking part.

Every single time you leave the house, you increase your chances of an unpleasant encounter.  Nothing will be accomplished by going out during a chaotic situation.

And for the love of all that’s holy, don’t go to a protest and take your children, even if it’s supposed to be peaceful.

Residents, many with children in tow, had turned out for what began as a peaceful protest Sunday evening seeking justice for Michael Brown, the 18-year-old who was shot six times by a police officer who allegedly stopped Brown for blocking a residential street.

The protesters marched toward a police command center set up in a shopping mall parking lot when heavily armed law enforcement fired on the crowd using tear gas and rubber bullets. An MSNBC reporter witnessed children suffering the effects of the gas, including two young African-American girls – one dressed in a pink tank top coughing as she struggled to push the shirt up over her mouth and nose while a woman rushed her from the scene. (source)

I can’t even wrap my brain around thinking THAT was a good idea.