As the Supreme Court of the United States (SCOTUS) hear two cases, commentator Bill O’Reilly and Fox News anchor Megyn Kelly both express the opinion that those opposed to same-sex “marriages” have nothing to offer but bible thumping. They claim that there is no “compelling argument,” and that opponents have done little more than “thump the Bible.” None of this is surprising though seeing as how Fox News support the leftist homosexual agenda.

“The compelling argument is on the side of homosexuals,” O’Reilly stated on his show “The O’Reilly Factor” on Tuesday.

“That’s where the compelling argument is. We’re Americans, we just want to be treated like everybody else,” he told his guest, fellow Fox News host Megyn Kelly.

“That is a compelling argument,” said O’Reilly. “And to deny that, you’ve got to have a very strong argument on the other side and the other side hasn’t been able to do anything but thump the Bible.”

O’Reilly went on to say, “I support civil unions — I always have — the gay marriage thing, I don’t feel that strongly about it one way or the other.”

“I live in New York. New York has it. I’m just fine with it,” O’Reilly added. “I want all Americans to be happy.”

While I would hardly consider O’Reilly an authority on the subject or anything for that matter, he is completely wrong that the only argument is from the Bible, though I confess it is the only authority that matters. I don’t abandon the Bible as my authority in the argument and it is no less “compelling” than the nonsense that those that engage in homosexual behavior give in stating “we just want to be treated like everybody else.” If you find that compelling, I’d say you are very shallow in your thinking. Try applying that to liars or thieves or murderers and see where that gets you. We all know that they are not treated the same as everyone else. By the way, I included those that commit violent acts and those that don’t just to make sure I cover all bases.

I have something to say to those that engage in homosexual behavior and cry out “we just want to be treated like everybody else.”

In order to be treated like everyone else you should stop behaving badly and yes homosexuality is behavior, not orientation. In fact, the token libertarian girl, Julie Borowski, who I agree with on many, many things was completely destroyed in an argument today. She posted on Facebook the following: “Warning: These people exist.” 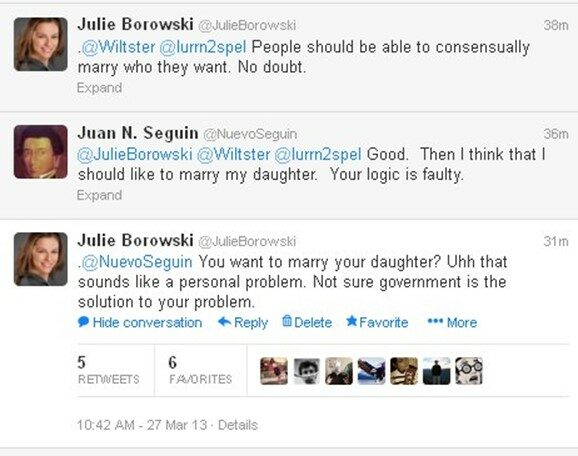 Honestly, Sequin cleaned her clock with his argument. Obviously, he was presenting a valid point. Borowski’s logic is flawed in this area just like a lot of people I know. In fact, she had no argument against him as you can see and so she resorts to ad hominem attacks on him, saying that he has a personal problem and saying that she’s not sure government is the solution to his problem. That’s right government isn’t the solution to any problem, but that doesn’t default to “people should be able to consensually marry who they want.”

She obviously has a problem with incestuous marriages, because following my comment to her about her faulty logic, she declared, “Incest is gross.” To which I responded, “Julie of course it is, just like homosexuality is.”

Obviously she wanted to back away and say “Don’t confuse liberty with license.” OK, granted they are not the same thing, but the logic she is espousing for same-sex “marriage” is the same logic that will be used to push for incest, polygamy, bestiality and all sorts of perversion of human sexuality and marriage.

I simply believe that the Bible is authoritative and in perfect harmony with nature, not contradictory to it.

I bring Julie into the conversation not to blast her, but to demonstrate that even people with great ideas sometimes get things wrong. Shocker, I know, right? One argument from nature that destroys homosexuality, which in turn destroys any argument for homosexual “marriage” was put up by my friend Shea Bernard. It demonstrates there is an argument from nature regarding homosexual behavior. I, on the other hand have argued from the Biblical perspective and have identified exactly what is taking place on the issue and that is a redefining of the term “marriage.”

I have even engaged others on our Facebook page. Some have argued as Borowski has that it shouldn’t be a problem what two people do as long as it’s “consensual.” Yet, when I ask the question in regards to two people in Germany engaging in consensual murder and cannibalism, the sound of crickets is deafening. Do you know why? Because people’s moral compass is so screwed up because they reject exactly the thing that people like O’Reilly and Kelly poo poo, the Bible.

I really think the entire issue concerning liberty, how it is defined and what its boundaries are were of a concern to many anti-federalists, including Patrick Henry, who when considering the Constitutional Convention in Pennsylvania said, “I smell a rat.” In fact, you will find that many of the things they warned against have come to pass.

Our Creator has not only given us instruction in His Word, but He has given us the light of nature. The problem is that sinful men have decided that they know better than the Creator and have chosen to suppress the truth in unrighteousness. Interestingly enough, when men do this, the first illustrated demonstration of God’s judgment upon them is men engaging other men in sexual deviancy and women engaging women in like manner. In fact, they are engaging in things so shameful that the Scriptures declare that they become, in the vernacular, “mental.” God gives them over to a reprobate mind.

Perhaps there are those who read this who declare, “Well marriage isn’t about sex.” I agree, it isn’t all about that. It is much more. However, it definitely includes that and the sexual union of a man and woman consummate that marriage. It is a distinct and integral part of the marriage. But two members of the same-sex can never become “one flesh.” Even nature teaches anyone, with the willingness to look to see, that the parts are only compatible if there is a male and female. For goodness sakes, our technology is even based on that! You don’t plug your male ended microphone into another male end!

God defines marriage, not men. The state has no business in it. It is an institution and does not require a contract be signed to engage in it. The consummation of marriage is the coming together in a physical union of the man and his wife, cutting a covenant, not making a “legal contract.” And yes, I’m aware that many people who are not Christians get married. That is not an obstacle to what I have presented since the Creator formed the first two people on the Earth and He is the one that declared,

“Therefore a man shall leave his father and mother and be joined to his wife, and they shall become one flesh. And they were both naked, the man and his wife, and were not ashamed.”

That is not “Bible thumping” my friends. It is the Word of the Living God who gave you life for the purpose of glorifying Him. If you are of the opinion that is not a valid argument, on what basis do you make such a charge? As for me, I’ll hold fast to the Bible which is not in opposition to nature, but rather nature confirms the words of the Scriptures. Those that continue to open their mouths against God have no right to redefine His institution, nor to call good what He calls sin. Until their mouths are stopped they will never want to hear the gospel of grace, in which that same God sent His Son into the world to save sinners. In fact, it can be said that Jesus Christ gave His life in the same manner for the “white lie” as the sin of homosexual behavior, but he didn’t do so to leave people in their sins, but save them from their sins.

On a final note, please notice how O’Reilly and others claim that a “majority” of Americans support same-sex “marriage.” If that is true, pray tell, why did one of the most liberal states in the Union vote it down and at least 32 states elect to ban such things? Just a little question I would be dying to ask Mr. “Spin Zone” some time.

Elliot Rodger: This Is What Happens When Young Men Are Taught That Scoring With Women Is The Ultimate Goal In Life