We’ve covered many stories about the infiltration of Islam into the government run public indoctrination centers in the United States. We’ve seen how Islam has been taught in the heartland of America, as well as seeing Muslim Brotherhood front groups call for and get Islamic prayer and permission to be excused from class for Islamic prayers. At least one Michigan mother took to Facebook to voice her outrage at 10th grade assignment that promoted Islam to 3rd graders.

Jennette Hall’s Facebook post said that Jenison High School gave an assignment to 10th graders to create a pamphlet that would be used to “introduce Islam to 3rd graders.”

A couple of days later, she made it clear that her daughter and fellow classmates were to create a pamphlet about Islam that though the pamphlets would be created with a focus towards 3rd graders, they wouldn’t actually be handed out to them.

“This assignment upset me because they are presenting Allah as the same God of the Christians and Jews,” she added. “This paper, in my opinion, is promoting Islam by describing Allahs names as ‘beautiful’. To me this is not simply factual like it should be.”

Hall then said that she had a meeting with the principle of the school, Brandon Graham, which was scheduled for Tuesday October 7, to address her concerns.

Graham had responded to concerned parents via his own Facebook account saying, “While our high schoolers do study religions, the content is NOT presented to elementary student or used to proselytize in any way. Any comments you see on Facebook or elsewhere suggesting otherwise has been misinterpreted and misunderstood.”

I don’t know how assigning students to write a pamphlet that promotes Islam, whether given out or not is not a form of proselytizing.

But, Graham continued, “Furthermore, we *do indeed* teach Christianity along with other world religions.”

The question that should be asked is are the 10th graders also given an assignment to create a pamphlet on a third grade level for Christianity. I’m guessing that isn’t the case. I’ll also ask whether or not Christianity is presented in a positive light. We’ve demonstrated that Islam has been exalted in certain curriculum while Christianity has been demeaned. 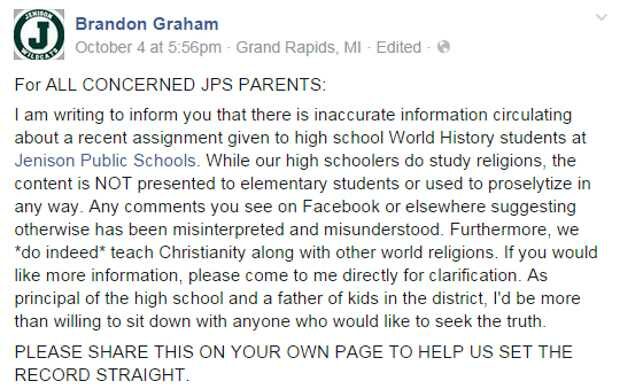 Hall responded the day before her meeting with the principal, “I have no issue with 10th grade students studying the 5 major religions. I realize the importance of studying the different religions and the impact of religious ideas in a World History class. So far this year the class has studied Christianity, Hinduism, Buddhism and now Islam. Traditional quizzes and drawing maps were the assignments given for the other religions.”

“I was SHOCKED when my daughter showed me the pamphlet that she was required to make promoting Islam in a way 3rd graders could comprehend,” she added. “As a mother who teaches her children that the One True Creator God is the GOD of Abraham, Isaac, and Jacob, it made me sick to my stomach to see my daughter promoting another god (Allah) as the One True Creator on a pamphlet! Islam was the ONLY religion of the 4 studied so far that was given the assignment to create a pamphlet.”

While Hall was right to call out the school on the issue, on October 8, she wrote “In the meeting, Dr. Brandon Graham and others in attendance carefully listened to my concerns and are considering making some changes Dr. Brandon Graham has asked me to remove my initial Facebook post and I have honored his request by removing the post from my Facebook page. My intention was not to cause negative publicity to the school district, but only to speak up, ask questions, and stand firm for what I believe.”

This is the one criticism I have of how she handled things. Until a change is made, the post should have remained up. This would keep pressure on these people. Once they had complied, I would have removed the post.

My suggestion would be that Mrs. Hall and all parents remove their children from the public indoctrination systems and teach their children in the way that God commanded them to in Deuteronomy 6. For more on that, see my article Education: One Area You Can Take Back Liberty Without Washington’s Help.

Obama: The Man Who Knew Nothing

Obama: The Man Who Knew Nothing