On Wednesday, President Donald Trump issued a volley of tweets about banning transgenders from the military.  However, The Department of Defense has responded and said that they “don’t execute policy based on a tweet.”

Trump tweeted out early Wednesday morning, “After consultation with my Generals and military experts, please be advised that the United States Government will not accept or allow……”

After consultation with my Generals and military experts, please be advised that the United States Government will not accept or allow……

“….Transgender individuals to serve in any capacity in the U.S. Military,” Trump continued.  “Our military must be focused on decisive and overwhelming…..”

….Transgender individuals to serve in any capacity in the U.S. Military. Our military must be focused on decisive and overwhelming…..

“….victory and cannot be burdened with the tremendous medical costs and disruption that transgender in the military would entail. Thank you,’ Trump added.

….victory and cannot be burdened with the tremendous medical costs and disruption that transgender in the military would entail. Thank you

The announcement was a push to clear out the military of people that compromise its integrity and its ability to function as it should.

The decision was to reverse a decision by the Obama administration in 2016 to allow transgenders to serve openly in the military.

The Pentagon responded on Thursday that they have not received any formal guidance from President Trump regarding his tweets and the new policy on transgenders.  As such, the DoD said they would not be changing their policy without formal authorization to do so.

“The Department of Defense is awaiting formal guidance from the White House as a follow-up to the Commander-in-Chief’s announcement on military service by transgender personnel,” said Pentagon Chief Spokesman Dana White. “We will provide detailed guidance to the Department in the near future for how this policy change will be implemented. The Department will continue to focus on our mission of defending our nation and on-going operations against our foes, while ensuring all service members are treated with respect.”

Chairman of the Joint Chiefs of Staff Gen. Joseph Dunford backed up the claims of White, telling all service chiefs that there would be “no modifications to current policy” until there was a direct order from Trump.

“I know there are questions about yesterday’s announcement on the transgender policy by the President,” he wrote in a memo to service chiefs, commanders and senior enlisted leaders.

“There will be no modifications to the current policy until the President’s direction has been received by the Secretary of Defense and the Secretary has issued implementation guidance,” the memo added.

“In the meantime, we will continue to treat all of our personnel with respect,” Dunford concluded.  “As importantly, given the current fight and the challenges we face, we will all remain focused on accomplishing our assigned missions.”

U.S. Army Chief of Staff Gen. Mark Milley also told the National Press Club “to date I have yet to receive implementation guidance, or directives, from Secretary of Defense” on Trump’s transgender ban.

Pentagon Spokesman Navy Capt. Jeff Davis declared Thursday to a Washington Examiner reporter that “we don’t execute policy based on a tweet.”

I previously reported on the US Army’s indoctrination of its people regarding accepting and respecting transgenders.

“Our mission is to defend this country, and we don’t want barriers unrelated to a person’s qualification to serve preventing us from recruiting or retaining the Soldier, Sailer, Airman or Marine who can best accomplish the mission,” said former Secretary of Defense Ash Carter in June 2016 following the perversion of welcoming transgenders to openly serve in the armed forces.

“We have to have access to 100 percent of America’s population for our all-volunteer force to be able to recruit from among them the most highly qualified – and to retain them…  Starting today: Otherwise qualified Service Members can no longer be involuntarily separated, discharged, or denied reenlistment or continuation of service just for being transgender,” Carter added.

The insanity that the Pentagon has accepted, has allowed them to embrace this. 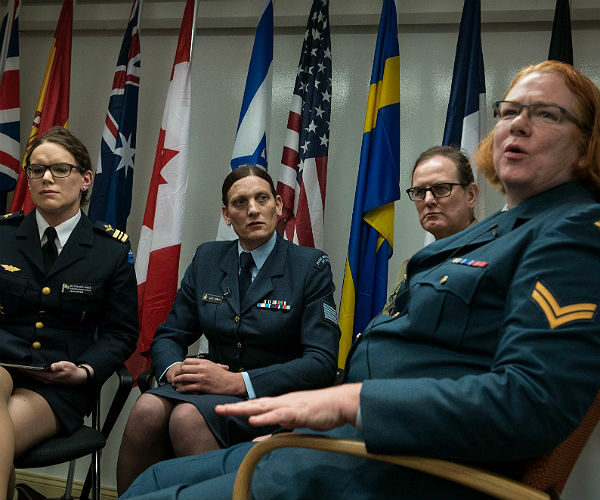 These are among those in the service of our country in the military.  They are all men.  They are not women and they never will be women.  They are at war with America because they are at war with God (Romans 1:18ff).  They have been turned over to a reprobate mind, and instead of seeking to correct their depraved thinking, the Army has become politically correct and embraced their delusions and is now forcing that delusion on those serving in the military.

The proper response to these people is to call them to repentance and faith in the Lord Jesus Christ.  They should be prayed for and confronted over their open and blatant sin.  You may ask, what sin?  Here’s what God says:

The woman shall not wear that which pertaineth unto a man, neither shall a man put on a woman’s garment: for all that do so are abomination unto the LORD thy God. -Deuteronomy 22:5

In the New Testament, Paul deals with men and women attempting to appear as the opposite sex in 1 Corinthians 11, something that was very much a part of that depraved culture.  He calls on them to honor their head, for the woman it is the man and for the man it is Christ.

I’m hoping that Trump will be issuing a direct order to remove such persons from the military and once again raise the moral bar there.