As I made my rounds around people in the know, over the past couple of days, regarding the I-10 shootings, I have concluded that many are very worried that Phoenix will be the site of the next big false flag event. This article details what is known and follows an obvious evidence trail to some very disturbing conclusions.

On September 10, 2015, a Phoenix Sniper(s) struck again, as Arizona cops have confirmed 11th freeway shooting in less than 12 days. The shootings have taken place near Interstate 10, mere miles from the downtown area. 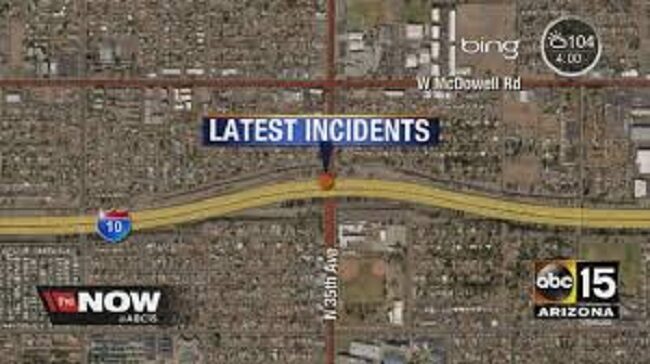 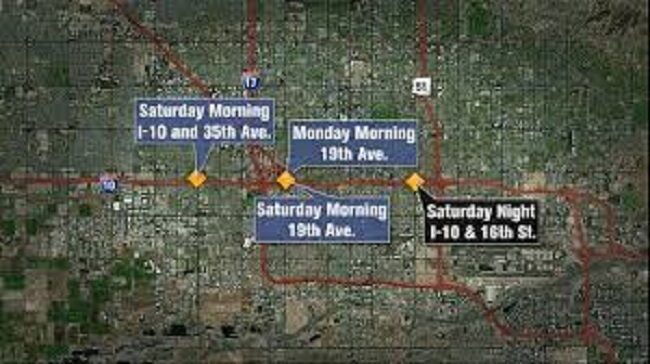 Phoenix is now a city that is becoming paralyzed with fear. For example, many school districts say they will keep their buses off the highways until the crisis is resolved. According to a local poll, 50% of the city said they would avoid the 10-12 mile stretch of highway where the shootings have taken place. The event is dominating the news in the local media. In fact, I have been asked to be on the radio with a local activist to provide my assessment of the present state of affairs, and this is what I will say about what I presently know and understand.

The Event Is Being Labeled As a Terrorist Event

Arizona law enforcement and local civilian authorities have even used the word “terrorism” to describe a series of shootings along the Interstate 10 corridor. They may be closer to the real truth than many people realize.

The Phoenix shootings have drawn comparisons to the so-called DC sniper attacks that terrorized the Washington, D.C., area in the fall of 2002. In total, 10 people were killed in those shootings, which targeted drivers pumping gas and people out for other ordinary errands. One of the gunman, John Allen Muhammad, was executed in 2009, and his accomplice, Lee Boyd Malvo, is serving life without the possibility of parole. However, the events in Phoenix do not follow the paten followed by Muhammad and Malvo.

The Gang That Could Not Shoot Straight

Yesterday, as I watched news report after news report, I could see the frustration of LEOs and politicians, as they were being interviewed by the media. The Department of Public Safety is now saying that there are multiple shooters, and that the shooters are not connected. Police authorities are conveying an air of helplessness.

The inability to pinpoint the shooters in Phoenix is, indeed, very surprising, given the fact that Phoenix has the latest in cutting-edge gunfire detection systems called ShotSpotter. In order to cut down on New Year’s Eve revelers who shoot off their guns into the air at midnight, Phoenix police employ the use of the ShotSpotter gunshot detection system, which works via a mix of sensors, software, and satellites. To employ the system, a series of sensors are placed on top of buildings and light poles, 8-12 per square mile. These sensors detect and record when an actual gunshot is detected. Gregg Rowland, Vice President of ShotSpotter, a company based in Mountain View, California stated that “Instead of relying on vague 911 calls, if the shots are even reported, an officer can respond with reliable intel.” Rowland also went on to say that “There isn’t much that can fool these babies.”  ShotSpotter can pinpoint a shot to within three feet! The ShotSpotter system has been installed in 20 cities across the United States, and Phoenix, AZ, is one of these cities.

According to police, a city that employs Shotspotter has not been able to detect where the random shooters involved in 11 shooting incidents in 12 days were or to go to the area and obtain local surveillance video to identify the shooters, getaway cars, etc. Yet, LEOs say that they know very little. Given the technology involved and the length of time that these events have taken place over such a confined area, I know the public is not being told the truth. I actually had one LEO tell me the media was not telling the truth but he refused to elaborate.

In summary, unidentified shooters have been terrorizing a large city of four million people. This is a city with sophisticated gunshot detection technology. The surface perimeter of the events is about 10 miles of open highway which is densely populated, and these shooters are able to avoid detection. Yet, armed with the ability to avoid detection, these shooters of 0 for 11 in hitting their targets. Yes, that is correct, these experts at avoiding detection have not killed anyone. This simply does not add up.

In order to look for motives for these non-random events, we need to look at the ISIS-inspired shooting earlier this summer in Chattanooga, TN.

Can the Chattanooga Shootings Provide Clues for the Phoenix I-10 Shootings?

There were warnings that this Jihadist murder was going to carry out his heinous crime from excerpts of the two following posts made less than three days before the attack.

In the Name of Allah (SWT), the Most Gracious, the Most Merciful

Here is a telling excerpt from a web post made by the assassin less than three days before his horrible act, as published in “Understanding Islam: The Story of the Three Blind Men.”

“…Take your study guide, the Quran and Sunnah, with strength and faith, and be firm as you live your short life in this prison called Dunya. Allah (SWT) says live for this life and the hereafter according to their length. Rasulullah says the life on this world compared to the hereafter is like a drop compared to an ocean.”

(Editor’s Note: Nineteen times in the Quran, the teachings call for the murder of nonbelievers. How did the NSA miss these website posts by this soon-to-be murderer?)

“…Brothers and sisters don’t be fooled by your desires, this life is short and bitter and the opportunity to submit to allah may pass you by. Take his word as your light and code and do not let other prisoners, whether they are so called “Scholars” or even your family members, divert you from the truth. If you make the intention to follow allahs way 100 % and put your desires to the side, allah will guide you to what is right…”

This was an ISIS event for which they have taken responsibility.

Forty to fifty shots were fired at a military recruiting center. Several minutes later, the assassin opened fire upon a Navy Reserve center in different part of Chattanooga, several minutes apart from the scene of the first shooting.

Why Did the Assassin Open Fire On Two Military Sites?

Muhammad Youssuf Abdulazeez wasn’t merely a man who went crazy one day in July. The military experts I have spoken with have told me clearly that the shootings of the first crime scene were merely a distraction to draw law enforcement authorities away from the real intended target, which was the second crime scene. This bought this ISIS assassin more time to carry out his true intentions at the second crime scene. One former Marine Corps sniper, with extensive Middle East duty, told me that Abdulazeez was a highly trained assassin and very proficient in carrying out both shootings.

Look at the shooting pattern at one of the crime scenes. Imagine that the glass door was a paper target. Then you will note the tight pattern of shooting. This man is a professionally-trained assassin who was highly proficient in the use of assault weapons. Notice that the bullet dispersals are basically at the same depth. Men diving under the desks for cover were diving into the spray pattern of the shots. With the creation of a distraction crime scene at the first scene, and with the shooting pattern of an expert, this man was a real professional. However, the closest he ever came to military training was his brief Mixed Martial Arts fighting career. Where did he get is training? ISIS? CIA? Both?

I have come to believe that there are many contextual clues in the Chattanooga shootings to the Phoenix I-10 sniper events. If the shooters in Phoenix wanted to kill people at this point in time, people would be dead. Are we really supposed to believe that these shooters, who are adept at avoiding detection, can’t hit the broad side of a barn?

Further, I think it is likely the distraction of the first scene shooting in Chattanooga has applicability to what we are seeing in Phoenix. From experts I have spoken to off the record, I think it is likely that the I-10 shooters are involved in a series of Beta tests. First, it is fairly clear that law enforcement reaction times and patters of response are being noted. Secondly, I fear that the I-10 shooters are setting up a distraction. Based on what has been written here, is it really so far-fetched to state that the Phoenix shooters will, one day, simultaneously open fire along the 10 miles stretch of I-10 in order to draw law enforcement away from an intended target in the same manner as Abdulazeez? Only this time, the I-10 assassins are shooting to kill in order to draw away as many police as possible. Then, in the same pattern we saw in Chattanooga, the real target is attacked. And what could that target be? To answer that question, one has to think like a terrorist. What would bring the most devastating effect upon a community? The answer would be an attack upon a school as the school was letting out. Secondly, I could foresee a crowded mall constituting a high value target.

Yesterday, the skies over West Phoenix were filled with formations of F-16 planes. This is an unusual site because Luke is a training base where we train many of our foreign allies’ pilots. The flights are normally conducted in pairs and the locals don’t typically see massive amounts of planes. The timing of this event is suspicious, given the timing of the I-10 shootings.

I fear an ISIS involvement in Phoenix; however, I cannot be certain at this point. What I certain of is that we will never be told the truth, and the possibility for a patsy to take the fall is high. Phoenix is on edge, and for good reason. Unfortunately, this is the new America.

Rebuttal to Liberals Denying Founding As a Christian Nation