Photo Captures Muslima Holding Her Baby Moments Before Blowing Herself Up

One has to wonder what sort of perverted thoughts must go through the minds of the followers of Muhammad to do such a thing.  A Mosul Muslim woman was captured in a picture holding her baby just moments before she detonated a bomb that blew her and her child up and killed two soldiers as well as injured several civilians.

The woman was walking out of Mosul, which had been recently liberated from the Islamic State, when she detonated a bomb as she walked by Iraqi troops, which killed her, her baby, two Iraqi soldiers and injured several civilians.

Upon close inspection of the photograph, which was taken moments before the explosion, it appears the woman is also carrying a detonator in her right hand. 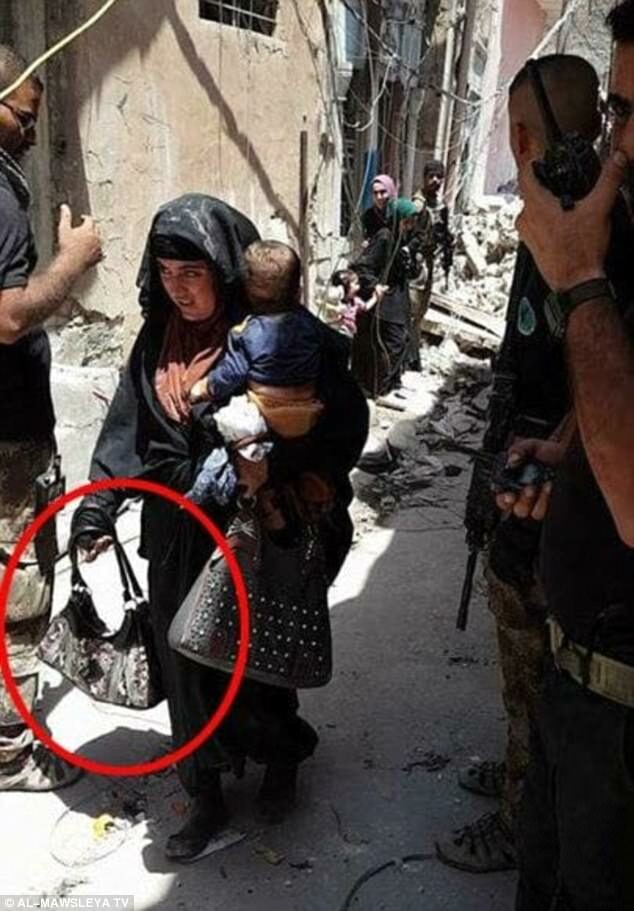 The picture was taken moments before the suicide bomber blew herself up, with her baby in her arms

She had apparently tried to detonate the explosives as she passed the soldiers, but the bomb failed to go off until she had walked some distance away, a cameraman for local al-Mawsleya TV said.

The Daily Mail reports, “ISIS’s [sic] Amaq news agency reported ‘fierce fighting’ around the riverside district of Maydan and said its fighters ‘were holding onto their fortified positions’.”

“The fighters of Islamic State are collectively pledging (to fight to the) death in Maydan,” said Amaq in another online post.

There have been more than 20 female suicide bombers who have detonated explosives in the past two weeks.  The are hiding among the civilian population and are using their own children as human shields.

“The women are fighting with their children right beside them,” said Lieutenant General Sami al-Aridi.  “It’s making us hesitant to use air strikes, to advance. If it weren’t for this we could be finished in just a few hours.”

This reminds me of the Palestinian woman whose little boy was being treated by Israeli doctors who said, “Life is zero. Life is Worthless…that is why we have all the suicide bombers.”