Political Correctness: What It Is and Where It Came From

Political correctness is essentially the outer workings on society of cultural Marxism. The goal of cultural Marxism is to rework society so that the traditional values are replaced completely. Whereas the Marxists of old believed the best way to achieve this was through violent, even militarized, opposition, the Marxists of today (the New Left, or just leftists) have found a better way to do the same thing and avoids bloodshed and death. It is done by changing society from within. This is something intellectual Antonio Gramsci understood and promoted in many of his writings.

Most people think that being politically correct means simply avoiding terms, phrases, and actions that have no purpose other than to offend people. Normally, these other people are part of minority groups. It isn’t socially acceptable for example, to use derogatory terms when referring to people of color or gays. Political correctness says that a civilized society avoids doing this type of thing because it simply exacerbates problems and creates more of a gulf between groups.

But is that what political correctness is all about? In short, political correctness – rather than encouraging people to recognize their sameness – encourages people to see and emphasize their differences. This is also known as multiculturalism. We should celebrate our diversity, rather than our sameness. In fact, we should actually celebrate those who are different from us, as if they are better because of those differences (unless you’re white). Politically correct thinking tells us to ignore the character of the person and merely focus on the color of his skin or gender.

Understand that the goal of Marxism remains the same today as it did generations ago – pitting the proletariat (worker) against the bourgeois (rich) and forcefully redistributing wealth. However, via political correctness (or multiculturalism), this same goal is achieved by forcing those within society to surrender independent thought.

In other words, societal pressure is used to force people to accept new values in place of those pesky biblical values. For instance, a person who disagrees with the gay lifestyle is quickly confronted with “Stop the H8TE!” and other soundbites designed to shame him into submissive silence. 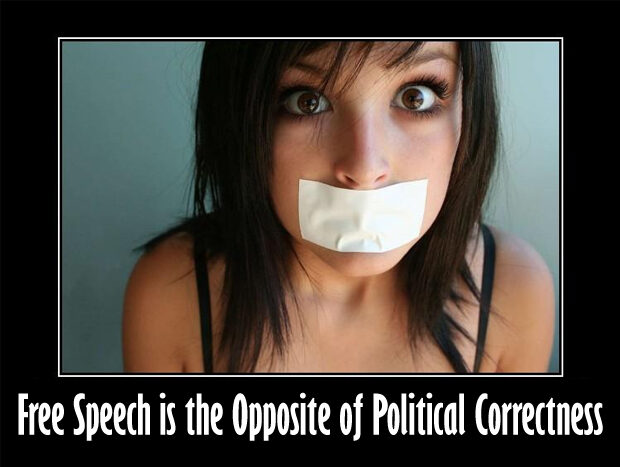 It doesn’t matter whether that person actually hates gays or not. The idea here is that their disagreement with homosexuality is seen as hatred and that’s what they are accused of doing. Soon, anytime someone dares to state their disagreement with the homosexual lifestyle, they are verbally attacked and vilified as someone who hates gays. Eventually, people learn to keep their opinions about homosexuality to themselves if they disagree with it. That is how political correctness is utilized to force society to accept a new value, replacing the old one.

This is also accomplished by the constant promotion (and repetition) of new values in the media, education, and business. The Marxist intellectuals of the past three or four generations through today, have buried themselves behind the Ivy League walls of our colleges, Fortune 500 businesses, Hollywood film making, and the music industry. They also fill the halls of Congress. From these positions of power, Marxists have redefined the core values within society. While this metamorphosis was quietly occurring, I believe many of us were caught completely off guard and are now playing catch up.

The main problem with political correctness (which breeds multiculturalism) is that “under most of these dogmas and taboos we can find a hidden presumption that was never properly examined — much less proven — yet, it can never be questioned.” [1] The individual who said that – Zuriel Redwood – uses the example of homosexuality as a perfect example. Zuriel explains by stating, “the entire gay rights movement is based on the presumption that gay people are born homosexual. Being gay is not a choice the dogma insists. The logic based upon this presumption suggests that any argument against any rights gay people claim is inherently unfair. Anyone who opposes the idea of gays in the military is immediately accused of hating gay people.” [2]

The basic foundational principle – that people are born gay – has never been proven. Redwood says that while some people are possibly born gay, we have not one shred of evidence or conclusive proof to support the concept/belief that all people who are gay, are born as such and not as a matter of choice. Yet, because of societal pressure created by political correctness, this unproven claim (that gays are born that way) is the accepted truth without proof.

Redwood refers to political correctness as one of the left’s most viable and useful weapons because it forces people to accept what those in society see as “truth” due to peer pressure. This peer pressure causes people to conform or be cast out. Who wants that? Too often, people will conform because they cannot bear the alternative. If we look through Scripture, we can see many examples of people who did not conform to societal pressure, but maintained their integrity by following God’s truth regardless of what might have happened to them.

Political correctness is a force within society that molds and shapes not only what people say and do, but ultimately how they think. “Soviet Bolshevism gave birth to political correctness as we know it today. Back then the term referred to actions or statements that were not illegal but were against the approved standards of the political leadership. Being politically incorrect was not necessarily punished legally, but it had political consequences.” [3]

Today, being politically correct means avoiding actions and words that would offend the sensibilities of others who are deemed to be victims within society (minorities). However, taken to its ridiculous extreme, the legislative enforcement of political correctness is what is most worrisome. We know that laws have been enacted in the UK that prohibit people from saying certain things. You want to call homosexuality “sin”? Prepare to be arrested and go to jail. The same is now happening in Canada, where a law was passed prohibiting the use of the word “sodomite” when referring to a homosexual.

In my next article, we’ll delve into how political correctness has affected society and in the process, how it has turned wrong into right.

This is a three part series. Read Part 2 here and Part 3 here.

Maxine Waters Wants a Fight with the Tea Party