[The following was written by Dean Garrison and originally appeared at DCdirtylaundry.com.  It has been reprinted with permission.]

The Saturday Antifa activities in Portland, OR were clearly out of hand.

A new report has surfaced that Antifa thugs beat an elderly man with a crowbar.

The above video was posted to LiveLeak on Sunday.

I’ve found two sources that tweeted the same scene over the weekend.

Portland Antifa beats an elderly man bloody with a crowbar. As another man attempts to help, he is hit in head with crowbar then sprayed in face with mace. This is #AntifaTerrorists Slowed video down slightly for better visual. Twitter now hiding the hashtag

And here is one from The Portland Tribune:

Authorities said “multiple assaults” were reported, and the demonstrators’ use of bear spray and thrown projectiles spurred police to also deploy pepper spray at times. Police said one bat was confiscated at Lownsdale Square, as weapons are banned in that park. 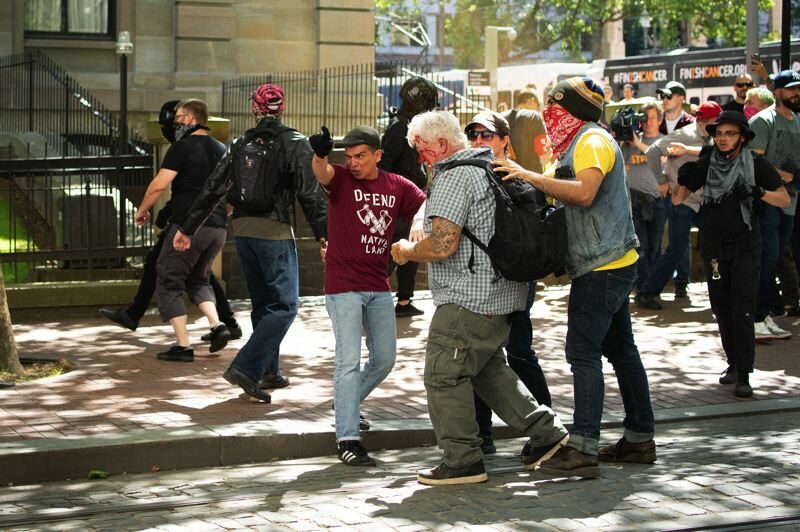 PMG PHOTO: KIT MACAVOY – A man bleeds from the face after a street brawl broke out in downtown Portland on Saturday, June 29.

“Demonstration events are very fluid in nature and the management of these events is complex,” Assistant Chief Chris Davis said in a news release.

He continued: “There are hundreds of peaceful free speech events in the City in a given year that do not result in violence. Unfortunately, today some community members and officers were injured. We are actively investigating these incidents to hold those responsible accountable.” 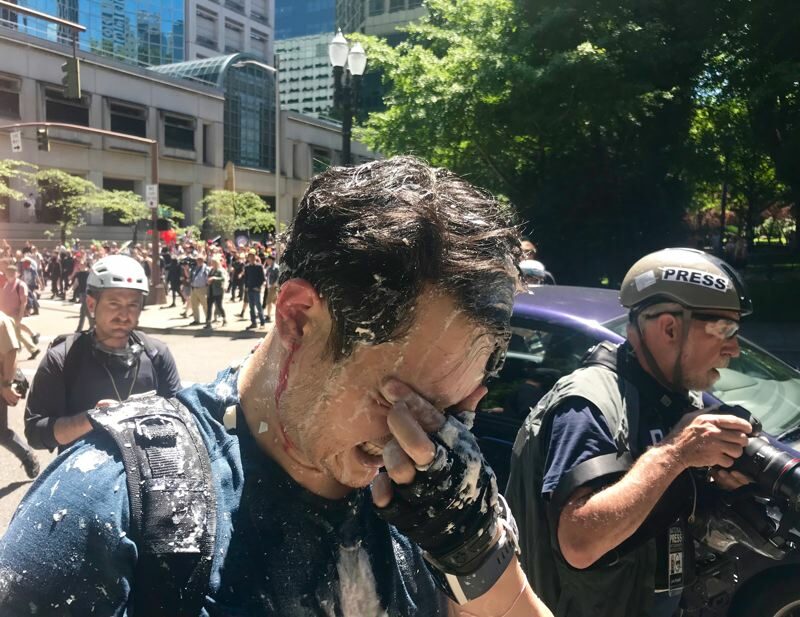 Medics with Portland Fire & Rescue said three of the injured people were police and three were taken to nearby hospitals for treatment. Police said two officers were pepper sprayed, an officer was punched in the arm and another sustained a non-life-threatening head injury after being struck by a projectile.

The most high-profile injured person was undoubtedly Andy Ngo, a famous live-streamer whose opinion pieces have been published in the Wall Street Journal and the New York Post.

On Sunday it was reported that Ted Cruz is calling for legal action against the Mayor of Portland:

Sen. Ted Cruz (R-TX) is calling for “legal action” against the mayor of Portland, Oregon following a brutal attack against conservative journalist Andy Ngo at an Antifa protest on Saturday.

“To federal law enforcement: investigate & bring legal action against a Mayor who has, for political reasons, ordered his police officers to let citizens be attacked by domestic terrorists,” Cruz tweeted on Sunday.

To federal law enforcement: investigate & bring legal action against a Mayor who has, for political reasons, ordered his police officers to let citizens be attacked by domestic terrorists. https://t.co/5xyCDARICl https://t.co/c0Tf3SsKEf

If we can’t get ADEQUATE legal action then the American people can and will only take so much of this Senator Cruz.

Stupid Antifa kids are going to be in for a shock some day when they find that they’ve brought crowbars to a gunfight.

No one wants that, but we can’t allow these thugs to beat elderly men with crowbars, and send respected journalists to hospitals.